UN Secretary-General Antonio Guterres told the UN Security Council on Sunday that hostilities in Israel and Gaza were "utterly appalling" and called for an immediate end to fighting. 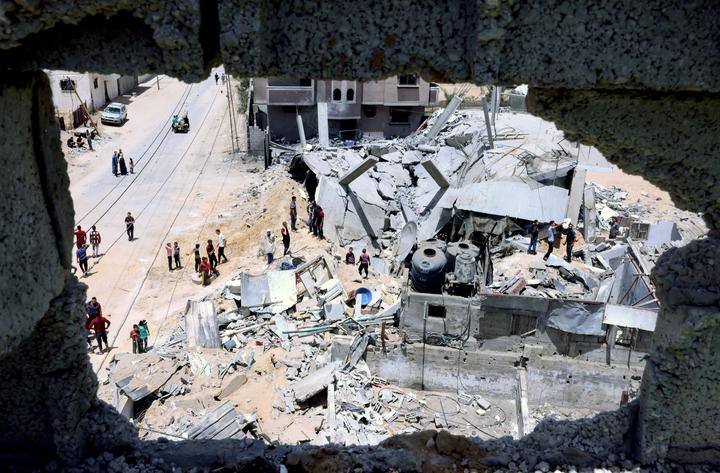 Palestinians inspect their house, after it was destroyed by an Israeli airstrike, in the city of Rafah, in the southern Gaza Strip on 16 May. Photo: AFP

Opening the 15-member council's first public meeting on the conflict, Guterres said the United Nations is "actively engaging all sides toward an immediate ceasefire" and called on them "to allow mediation efforts to intensify and succeed."

The overall death toll in Gaza now stands at 188 people, including 55 children and 33 women, with 1230 injured, according to the Hamas-controlled health ministry. Israel says dozens of militants are among the dead.

Ten people, including two children, have been killed in rocket attacks on Israel since Monday, Israel said.

The UN Security Council met privately twice last week over the worsening violence, but has so far been unable to agree on a public statement because the United States - a strong ally of Israel - did not believe it would be helpful, diplomats said.

"The United Nations is working tirelessly with all sides to restore calm," UN Middle East envoy Tor Wennesland told the council. "The international community has a crucial role to play. It must take action now to enable the parties to step back from the brink."

Truce efforts by Egypt, Qatar and the United Nations have so far offered no sign of progress.

"We are acting now, for as long as necessary, to restore calm... It will take time," Mr Netanyahu warned.

Israel's military says it has been targeting leaders and infrastructure linked to Hamas.

Hamas launched a new barrage of rockets towards southern Israel on Sunday afternoon.

The Israeli air strikes - the deadliest attack in the conflict so far - hit a busy street just after midnight.

Palestinian rescue workers have been working through the rubble of at least three destroyed buildings, pulling out bodies and searching for survivors.

"I have never covered air strikes with such intensity, explosions are everywhere in Gaza, there are difficulties in communicating with officials to find out where the strikes are," said the BBC's Rushdi Abualouf in Gaza.

"The building in which I live in [the] western part of the city shook like an earthquake," he wrote on Twitter. "A hysterical state of chaos, children and women in the building that houses more than 200 people screaming."

Israel's military said it struck the homes of both Hamas leader Yahya Sinwar and his brother Muhammad Sinwar, whom it described as head of logistics and manpower for the movement.

Both residences had, it said, "served as military infrastructure" for Hamas.

Local sources confirmed to media that the Hamas leader's home in the Gaza town of Khan Younis had been bombed. There were no immediate reports about the fate of the two brothers.

It was unlikely they were at home at the time of the strikes, according to the Associated Press news agency. 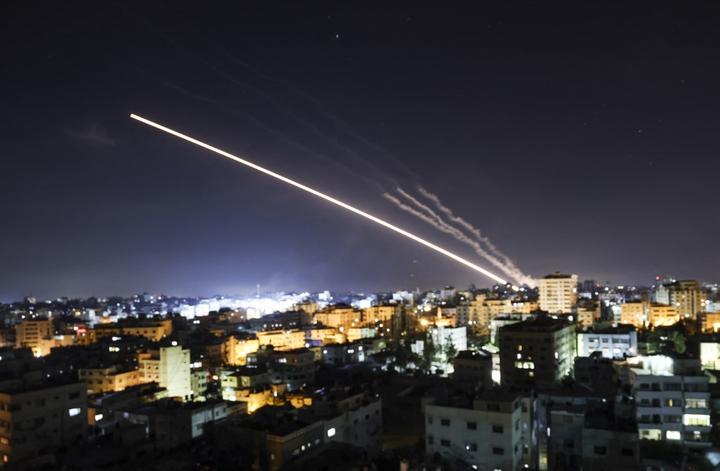 Rockets are launched from Gaza City, controlled by the Palestinian Hamas movement, towards Israel early on 15 May. Photo: AFP

Shortly after noon, rockets were launched by militants in Gaza against Ashkelon, Ashdod, Netivot and other parts of central and southern Israel, according to Israeli media. There were no reports of casualties.

The Israeli military said it had seen the highest ever concentration of rocket attacks on its territory during the past week.

On Sunday evening, Israeli police said there had been a car-ramming incident in the Sheikh Jarrah neighbourhood of East Jerusalem.

An Israeli police spokesman said the driver had been shot dead and four Israeli officers injured.

The threat to evict Palestinian families from Sheikh Jarrah to make way for Israeli settlers sparked the current round of violence between Israel and the Palestinians.

Those tensions culminated in clashes at a holy site revered by both Muslims and Jews. On Monday, Hamas began firing rockets after warning Israel to withdraw from the site, triggering retaliatory air strikes.