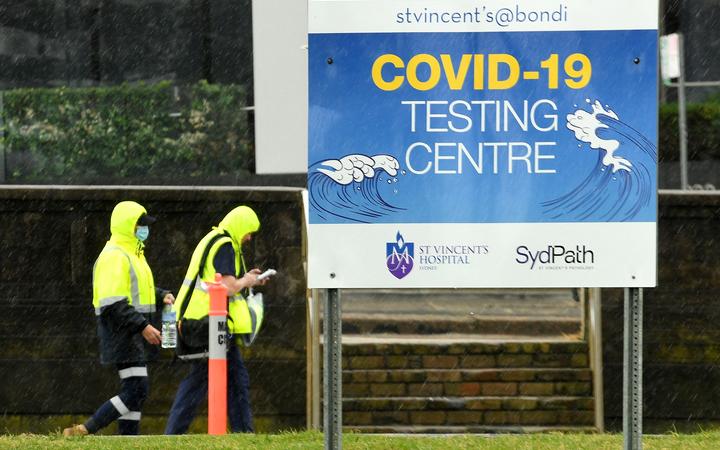 Medical officers walk past a sign board of Covid-19 testing center on Bondi Beach in Sydney on 6 May, 2021. Photo: AFP / Saeed Khan

Last Wednesday, the state reported its first local case in more than a month after a man in his 50s tested positive, tracing the infection back to a returned traveller from overseas.

But officials have not yet located the transmission path between them, raising concerns that the virus could be spreading in the community through undiscovered cases.

The case of the unidentified Sydney man, who later passed the virus on to his wife, prompted authorities to extend social distancing restrictions and mandatory masks in public transport in the greater Sydney region, home to more than 5.3 million residents, until 17 May.

Authorities said the man may have contracted the virus through brief contact with an as yet unidentified person who was infectious.

While quarantine-free flights to and from the state and New Zealand resumed yesterday after a brief suspension, New Zealand's Ministry of Health warned that anyone who was at a location of interest in Sydney at the times specified by officials must follow health advice regarding isolation and testing.

In addition, they must not travel to New Zealand within 14 days from when they were at the location.

Travellers who had arrived in New Zealand and were at a location of interest during the exposure time must immediately self-isolate, and call Healthline on 0800 358 5453 for advice on when they should be tested, the ministry said.

It has reported just more than 29,900 cases and 910 deaths since the pandemic began. New Zealand has reported 2287 confirmed cases, and 26 deaths.