New Zealand citizens stranded in India should be urgently evacuated by the government because their lives are in serious danger, according to an NGO. 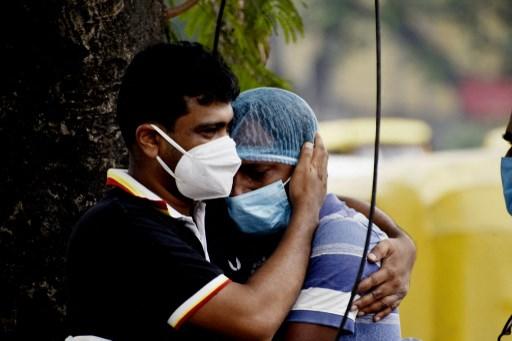 A family member is consoled after a Covid-19 death in Kolkata, India. Photo: AFP

New Zealanders are desperate to leave as Covid-19 infections soar, but have not been able to because of a lack of commercial flights.

New Zealand's cricketers are today flying back home on two private jets, paid for by the Indian Cricket Board.

Multicultural New Zealand, an umbrella organisation of ethnic communities, said the government now needed to act on repatriation flights. Covid-19 was the enemy and the threat to human life was very real, said president Pancha Narayanan.

"It's like a war zone, and traditionally New Zealand has always repatriated its citizens from war zones, and I think that that kind of urgency needs to be exercised in getting New Zealanders back from the Indian subcontinent.

"That's been an incursion, it's a viral one - notwithstanding that, they're in serious danger and it's our duty as a nation, and our duty to citizens to bring them back."

The government has so far declined to lay on repatriation flights and that position may need to be tested legally, said Narayanan.

"We need to take some extraordinary measures, perhaps like sending an aircraft from New Zealand to bring back our citizens," he said. "I think it is worthwhile, and it is necessary.

"And we perhaps may also need to look at the responsibility of Government, centred around the legislation - we may have to have an independent look at it to see whether our government is actually exercising its duties appropriately."

But travellers should pay for their flights, he added.

Prime Minister Jacinda Ardern has said the message has always been very clear about the risks of travelling overseas. She said the lack of commercial flights was likely to be temporary, but officials were monitoring the situation.

Australia today said it would start repatriation flights on 15 May after its ban on travel from India ends.