The French government has warned it could cut electricity to Jersey amid an escalating row over post-Brexit fishing rights. 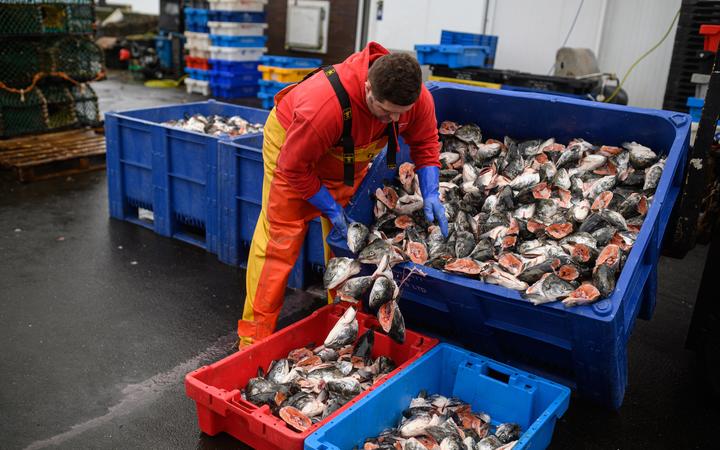 France and the UK are escalating a battle over fishing rights. Photo: AFP / Oli Scarff

France was "ready to use ... retaliatory measures" under the UK-EU post-Brexit trade deal, she said.

"I am sorry it has come to this [but] we will do so if we have to," Girardin said.

Jersey, the largest of the Channel Islands, receives 95 percent of its electricity through three underwater cables from France.

In a statement to AFP news agency, the French fisheries ministry said the UK had introduced "new technical measures" linked to licences for fishing off the Channel Islands which had not been communicated to the EU and were therefore "null and void".

Meanwhile, the UK's Department for Environment, Food and Rural Affairs said: "We are clear that Jersey is responsible for its own territorial waters".

The latest comments mark an escalation in the row over fishing rights, which has been simmering for months and marked a key sticking point in post-Brexit trade talks.

What is the fishing row about?

French fishermen have complained of being prevented from operating in British waters because of difficulties in obtaining licences. To receive a licence under an agreement with the EU, French boat operators have to show a history of fishing in the area.

Jersey has the sole power to issue the licences, and as of last week all fishing boats are required to have a licence to operate there.

On Friday, the Jersey government granted 41 permits to French fishing vessels that are equipped with technology that allows them to be located.

But the French government claimed the list of approved ships came with further demands that "were not arranged or discussed, and which we were not notified about".

The French fisheries ministry said the new rules dictated "where the ships can go and cannot go" as well as the number of days fishermen can spend in the area.

"This is absolutely unacceptable," Girardin said. "If we accept this for Jersey, it would imperil our access everywhere."

Meanwhile, British seafood exporters have been hit by an EU ban on UK exports of live shellfish. Scottish firms account for most of that business, and some now face collapse.

The UK has also failed to strike a new fishing agreement with Norway. That failure threatens to prevent British trawlers catching cod in Norway's sub-Arctic seas.