A majority of people on both sides of the Irish border believes Northern Ireland will have left the UK within 25 years, a poll suggests. 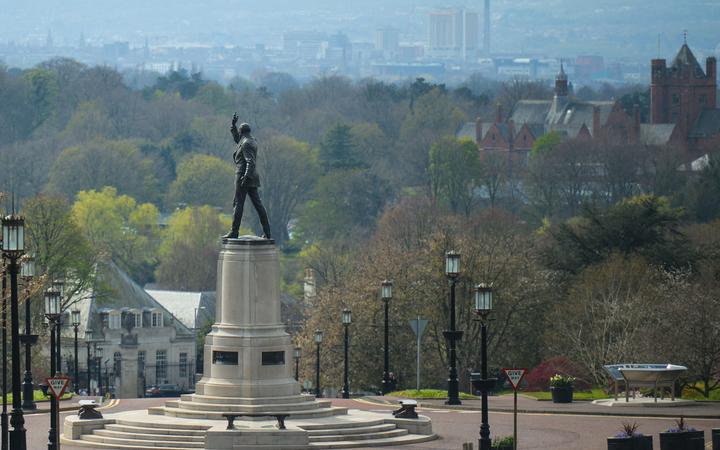 Most respondents said they thought Northern Ireland (NI) would still be part of the UK in 10 years time, but not in 25 years.

In NI, 49 percent of people said if there was a border poll today they would vote to remain in the UK, with 43 percent backing a united Ireland and 8 percent undecided.

The poll was commissioned by BBC NI's Spotlight programme.

When asked if this would be the case in 25 years, 51 percent of people in NI and 54 percent in the Republic said NI would have left the UK.

The poll also suggested that only 40 percent of people in Northern Ireland saw its formation 100 years ago as a cause for celebration.

Most people on both sides of the Irish border believed there was a potential for a return to political violence in Northern Ireland, according to the poll.

The poll was carried out over the Easter period when clashes were taking place in areas across Northern Ireland, sparked by loyalist anger over the Northern Ireland trade protocol and the police service of Northern Ireland's handling of a republican funeral during the pandemic. 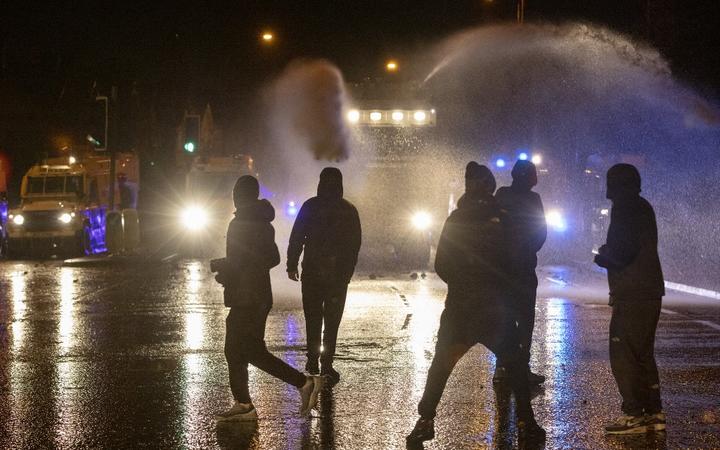 Police use water cannon on rioters during an outbreak of violence over several nights this month. Photo: AFP

Of those surveyed in Northern Ireland, 76 percent agreed with the proposition that "the dispute over Northern Ireland's status remains unresolved and there is still a potential for violence in the future".

In the Republic, an even higher proportion - 87 percent - echoed that view.

A total of 48 percent of those surveyed in Northern Ireland told the pollsters they wanted the controversial trade protocol introduced as part of the UK's EU Withdrawal Agreement scrapped, in line with demands from the DUP and other unionist parties, while 46 percent wanted the protocol to be retained.

Unionists have claimed the protocol, which requires checks on goods moving across the Irish Sea from Great Britain to Northern Ireland, threatens the constitutional integrity of the UK.

Interviewed for the Spotlight programme, Taoiseach (Irish Prime Minister) Micheál Martin insisted the protocol was not tearing the UK apart, while Prime Minister Boris Johnson said he was working to "sandpaper" away what he described as the "ludicrous barriers" to trade across the Irish Sea.

In the Republic, a majority of those surveyed supported the Irish government's defence of the trade protocol, with 74 percent saying it should not be scrapped.

Although within Northern Ireland a larger number of people rejected the trade protocol than backed it, the poll also provided an indication that a majority wanted to retain some form of economic link with the EU.

Some 56 percent of those surveyed in Northern Ireland told the pollsters that they wanted their assembly members (MLAs) to vote to stay within the EU Single Market when the matter was put to a vote at Stormont in three years' time.

Only 38 percent indicated they wanted to leave the EU Single Market.

In Northern Ireland 37 percent of people surveyed told the pollsters they would like to see an Irish border poll within the next five years, while a further 29 percent wanted it to happen at some point after that.

However, the prime minister told the Spotlight programme that he could not see any Northern Ireland secretary considering a border poll for a "very, very long time to come".

However only 40 percent of the people surveyed agreed with the proposition that "the formation of Northern Ireland 100 years ago was an achievement which should be celebrated", and 45 percent disagreed with the statement.

Plenty disagree with Taoiseach (Irish Prime Minister) Micheál Martin, who says the centenary of Northern Ireland's formation is a cause for celebration. Photo: AFP or licensors

Outright celebration of the centenary turned out to be the least popular of five options included in the survey.

In Northern Ireland, 48 percent agreed that the partition of Ireland and the creation of a land border 100 years ago was "a negative development which should be regretted".

A total of 50 percent wanted to concentrate on challenges such as the Covid-19 pandemic rather than the centenary, while 61 percent backed marking Northern Ireland's formation in a neutral manner acknowledging the differing opinions on the subject.

The same proportion, 61 percent, agreed with the statement "Northern Ireland's history is not just about constitutional politics and the centenary should provide an opportunity to showcase its sporting, business, scientific and cultural achievements".

In the Republic, celebrating the formation of the Northern Ireland statelet was even more unpopular with just 12 percent agreeing with the proposition.

The most popular options were marking this year's centenary in a neutral manner, which was favoured by 74 percent of those surveyed and regretting partition - a view 71 percent agreed with.

The poll commissioned by BBC Northern Ireland's Spotlight programme was carried out by the NI Pollsters LucidTalk and the Irish polling firm Ireland Thinks.

The margin of error is plus or minus 2.5 percent.