The Duchess of Sussex has told Oprah Winfrey she had thought about suicide and when she sought help from the 'institution', she was denied. 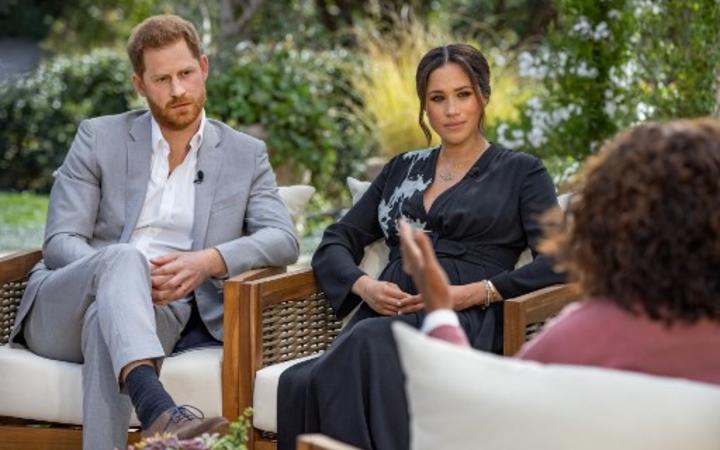 Price Harry and Meghan in conversation with Oprah Winfrey. Photo: AFP or licensors

The Duke and Duchess of Sussex have been interviewed by Oprah Winfrey for a two-hour CBS primetime special.

'I could not have felt lonelier'

Meghan, Duchess of Sussex, told Oprah said that she began to feel lonely after limits were put on the things she could do, for example not being able to go to lunch with her friends.

She said one of the "members of the family" asked her to lay low for a while, but Meghan said she had not left the house in months.

"I'm everywhere but I am nowhere," she said.

She said at one point, she thought: "Right now I could not feel lonelier."

"Of course that breeds loneliness."

She compared losing her freedom to how people have felt during the past year because of the coronavirus lockdowns.

In response to Oprah asking her whether she was "silent" or "silenced", Meghan said it was the latter.

Meghan said that everyone in her world was given "very clear directive" to always give no comment from the moment it became publicly known that she and Harry were dating.

She said that she initially thought that she was "being protected" but this soon changed.

"That was really hard to reconcile because it was only once we were married and everything started to really worsen that I came to understand that not only was I not being protected I but that they were willing to lie to protect other members of the family.

"But they weren't willing to tell the truth to protect me and my husband."

Oprah asked Meghan about her past comments, describing the experience as "unsurvivable".

"Almost unsurvivable sounds like there was a breaking point," Oprah said.

"I just didn't want to be alive anymore," Meghan replied, saying she was "ashamed" to admit it to Harry because of how much "loss he's suffered".

"That was a real and frightening, constant thought," she said.

Meghan said she sought help from "the institution", the royal household and their staff, asking to go somewhere to get help.

"I begged for help from the British royal family, said i was concerned about my mental welfare, but nothing was done to help me."

The request was denied, she said.

"Were you having suicidal thoughts?" Oprah asked.

"Yes," Meghan replied. "I thought it would have solved everything for everyone."

Meghan claims royals changed rules so Archie did not get title

Meghan was asked by Oprah about baby Archie - who was not made a prince at his birth.

She said she found the news "really hard" - not because she wanted the title but because it meant he would not have security.

"All the grandeur surrounding this stuff is an attachment I don't personally have, right.

"The most important title I will ever have is 'mom'. But the idea of our son not being safe and also the idea of the first member of colour in this family not being titled in the same way that other grandchildren would be..."

She said the convention, meaning her children would be prince or princess, was changed while she was pregnant.

"It's not their right to take it away... While I was pregnant they said they want to change the convention for Archie. Well, why?"

She said the news reports suggesting the lack of title was her and Harry's decision were wrong.

Oprah asked Meghan about why she thought the Royal Family didn't want to make Archie a prince.

"Why do you think that is? Do you think it's because of his race? I know that's a loaded question," said Oprah.

"I can give you an honest answer," said Meghan.

"In those months when I was pregnant, all around this same time so we have in tandem the conversation of he won't be given security, he's not going to be given a title, and also concerns and conversations about how dark his skin might be when he was born."

Oprah asked her who said that.

Meghan didn't answer, and Oprah asked again. "There are several conversations about it," said Meghan. The conversation was with Harry, she said, and about how dark the baby's going to be "potentially and what that would mean or look like".

She refused to say who it was, saying: "I think that would be very damaging to them."

Meghan added: "That was relayed to me from Harry. Those were conversations that family had with him. And I think it was really hard to be able to see those as compartmentalised conversations."

Harry: It hurt that my family did not show support against racism

"I had no idea what to do, I wasn't prepared for that, I went to a very dark place as well," he said.

Harry said he did not tell anyone in the family because "that's just not a conversation that would be had".

"I guess I was ashamed of admitting it to them," he said, adding that it's a very trapping environment.

"I didn't have anyone to turn to," he added.

"For the family, they very much have this mentality of: this is just how it is. This is how it's meant to be, you can't change it, we've all been through it.

"But what was different for me, was the race element. Because it wasn't just about her, it was about what she represents.

He added that for Meghan, "and the specifics around her race", it was an opportunity for the Royal Family "to show some public support".

He said the "most telling" parts - and "saddest parts" - was that more than 70 MPs came out and condemned the colonial undertones of headlines and news articles.

"Yet no-one from my family ever said anything over those three years," he said. "That hurts."

Harry and Meghan announced they are expecting a baby girl.

Meghan said that she and Harry got married three days before their wedding.

"Three days before our wedding, we got married. No-one knows that but we called the Archbishop (of Canterbury) and we just said 'this thing, this spectacle is for the world but we want our union between us'."

She revealed this as the couple spoke to Oprah in a pre-recorded segment during which Meghan showed the chat show host the chickens they have rescued.

Discussing her wedding day, Meghan said it was like "having an out-of-body experience".

She revealed that she slept through the night before her wedding and when she woke up on her wedding day she listened to the song 'Chapel of Love'.

"I think we were just both really aware, even in advance of that, this wasn't our day. This was the day that was planned for the world."

Oprah asked Meghan about the onslaught of tabloid stories published about her.

The US broadcast star asked specifically about rumours that Meghan made Kate, Duchess of Cambridge, cry in a fight about flower girl dresses for Harry and Meghan's wedding.

This story marked a "turning point", Meghan responded, saying that the "reverse" was true.

"A few days before the wedding [Kate] was upset about the flower girl dresses and it made me cry," Meghan said, adding that she "hoped" Kate would have wanted the false stories corrected.

"I'm not sharing that piece about Kate to be disparaging about her," Meghan said. "She's a good person."

Oprah asked whether Meghan thought the press had a standard for Kate and a different one for her.

The chat show host highlighted some of the news stories published about Kate compared to Meghan, for example Kate eating avocados to help with morning sickness but in the story about Meghan, avocados were described as a fruit linked to deforestation.

"I don't know why, I can see now what layers were at play there. And again they really seemed to want a narrative of a hero and a villain," she said.

Oprah pointed out that she was the first mixed-race person to marry into the family, as well as a divorcee and an independent woman. Did that concern her in being able to fit in?

"I thought about it because they made me think about it, right. But I think at the same time now, upon reflection, thank God all of those things were true. Thank God I had that life experience. Thank God I had known the value of working."