The National Emergency Management Agency (NEMA) says the tsunami threat has passed for New Zealand after a magnitude 7.7 earthquake near New Caledonia but people should continue to take precautions. 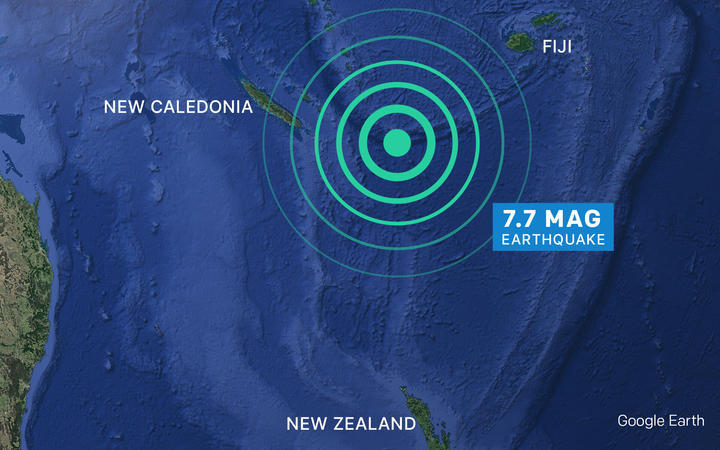 The undersea earthquake struck south east of the Loyalty Islands at 2.20am triggering a NEMA national advisory for New Zealand.

NEMA said based on the most recent modelling and decreasing tsunami amplitudes at North Cape, Great Barrier Island and the East Cape, the tsunami threat has passed for New Zealand.

There could still be large unexpected currents and the public are advised to continue to take precautions in coastal zones for the rest of today, it said.

Early this morning NEMA had told people in or near the sea from Ahipara Bay to the Bay of Islands, Great Barrier Island, and from Matata to Tolaga Bay to move out of the water, off beaches and shore areas and away from harbours, rivers and estuaries.

NEMA had said there was a danger to swimmers, surfers, people fishing, small boats and anyone in or near the water close to shore. However there was no need to evacuate other areas unless directly advised by local civil defence .

At Ahipara, on the southern end of Ninety Mile Beach on Northland's west coast, local man Paul Hansen said surge waves were pushing the water 30-40 metres further up the beach than usual.

Hansen, who lives above the beach, watched the surge from his house.

"I would expect the water to be sitting around about the mid-tide mark but on a reasonably regular basis what we're seeing is the water move right through to a high-tide mark.

"I will definitely be staying off the beach."

He said the beach entrances had been blocked off and he couldn't see anyone along the shoreline.

A water gauge off Great Barrier Island recorded a 75cm wave just before 6am.

The strong currents and surges were predicted to start around North Cape from about 4.20am, and NEMA warned first waves might not be the most significant.

NEMA acting director Roger Ball had said there was no threat to land for New Zealand, but people needed to stay out of the water and off the beaches because of the possibility of surges and unusual currents.

NEMA issued estimates of the earliest wave arrival times, noting arrival times may be as much as one hour later:

There were more than 20 aftershocks in the same area on Thursday morning, the largest of 6.4 magnitude.

GNS duty seismologist Dr John Ristau said it was likely that the 7.7 quake would be the main shock.

"Even though that increased risk is still small, it's a possibility."

The subduction zone earthquake occurred at the boundary of the Australian plate as it pushes underneath the Pacific plate. "It wasn't close to land areas ... but it did generate a tsunami with a height of a few tens of centimetres," Ristau said.

People are advised to take care in coastal zones for the rest of Thursday.

Geoscience Australia said the quake had an epicentre 401km east of Tadine, New Caledonia. USGS said it was at a depth of 10km.

UPDATE: Overnight, a Tsunami Marine Warning was issued for Lord Howe Island. It has now been cancelled. The Joint Australian Tsunami Warning Centre issued the warning following a 7.6 magnitude earthquake near New Caledonia. Watch our video for more info: pic.twitter.com/n1XDqbVflQ

The US Tsunami Warning System lifted its earlier advice for the Pacific that hazardous tsunami waves up to a level of 1m above the normal tide level were possible for coasts within 1000km of the epicentre.

In this country, NEMA decides any official warning status for New Zealand, and when to give the all-clear.