Hundreds of alleged members of Italy's most powerful mafia group are set to face justice in the country's biggest organised crime trial in decades. 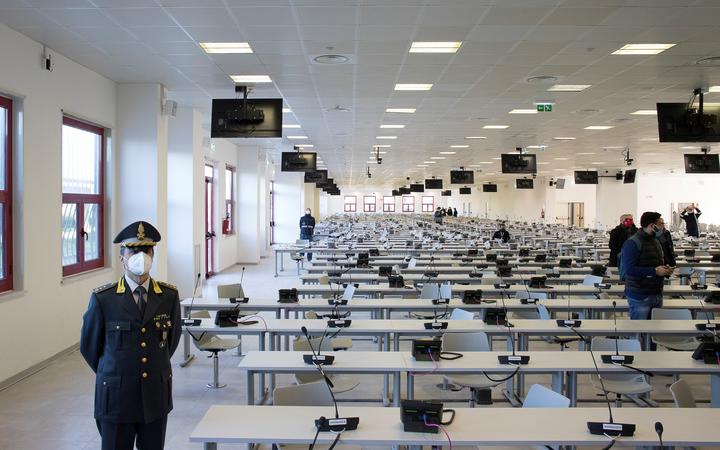 The inside of a new bunker room built for the upcoming 'Rinascita-Scott' maxi-trial in which more than 350 alleged members of Calabria's 'Ndrangheta mafia group and their associates go on trial this week. Photo: AFP

The 355 suspected mobsters and corrupt officials were charged following a long inquiry into the 'Ndrangheta group.

More than 900 witnesses are expected to give evidence, and the charge sheet includes murder, drug trafficking, extortion and money laundering.

The trial begins on Wednesday local time and is expected to last more than two years.

It will take place in a specially modified building in the southern region of Calabria, which is at the heart of 'Ndrangheta territory.

The building, formerly a call centre in the town of in Lamezia Terme, has been converted into a fortified courtroom to make space for the hundreds of people likely to attend the proceedings. No mafia trial has been held in Italy on such a scale since the 1980s.

Who are the defendants?

Unlike the earlier trial, which ran from 1986 to 1992 and targeted a large number of Cosa Nostra families in Sicily, Wednesday's trial is aimed at just one group, the Mancuso family, which forms a powerful section of the sprawling 'Ndrangheta mafia.

Although the 'Ndrangheta are now bigger than Cosa Nostra, the Mancuso clan are said to operate mostly in the Calabrian province of Vibo Valentia.

During a recent pre-trial hearing it took more than three hours to read the names of the defendants, AFP news agency reports. They include politicians, police officers, civil servants as well as alleged members and accomplices of the mob.

The highest-profile defendant is the alleged clan boss Luigi Mancuso, 66, also known as "The Uncle". Other defendants are said to go by nicknames such as "The Wolf", "Fatty" and "Blondie".

The number of accused increases to more than 400 when the 92 suspects who chose a separate fast-tracked trial are factored in. These include Giancarlo Pittelli, a lawyer and former senator for ex-Prime Minister Silvio Berlusconi's Forza Italia party.

Pittelli denies connecting the 'Ndrangheta to the world of politics and other powerful institutions such as the courts.

Most of the defendants were detained in pre-dawn raids in Italy, Germany, Switzerland and Bulgaria in December 2019. 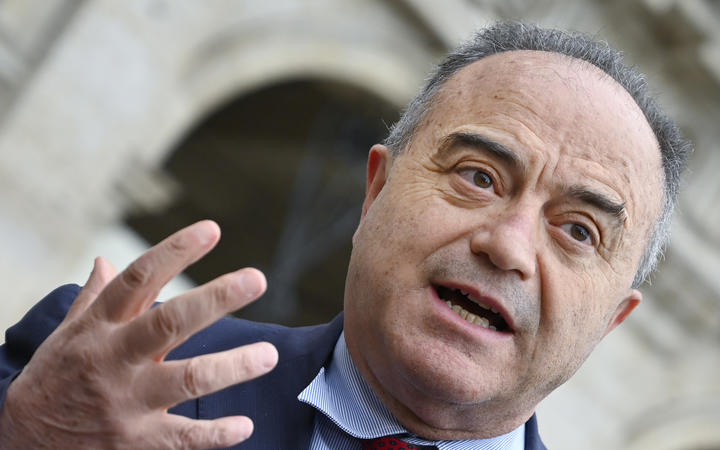 The 'Ndrangheta are believed to control the supply of huge amounts of cocaine entering Europe from South America and elsewhere.

But the lengthy charge sheet for the hundreds of defendants goes far beyond drug crimes. It includes mafia association, murder, attempted murder, extortion, loan sharking, disclosure of official secrets and abuse of office.

"This trial shows how deeply rooted the 'Ndrangheta is in society," Federico Varese, professor of criminology at Oxford University, told AFP. "It's shocking that you have a criminal group so rooted in the territory you have to put hundreds of people on trial."

Central to the case is Italy's most famous anti-mafia prosecutor, 62-year-old Nicola Gratteri, who has lived under police protection for more than three decades.

He has vowed to take down "this asphyxiating 'Ndrangheta, which truly takes the breath and the heartbeat from the people".

But Prof Varese has warned that the trial will not mark the end of the group. "You can throw them in jail but if you don't take away the root causes of why they exist, they'll just reproduce," he said.