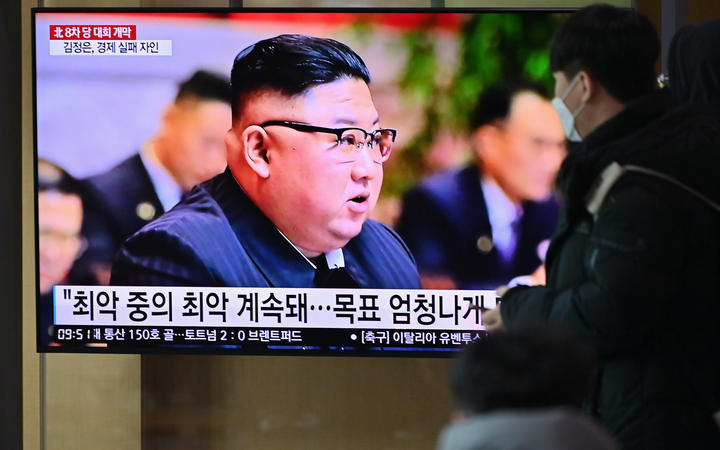 The military plans announced during one of the biggest political events in North Korea in the last five years may sound threatening - and it is indeed a threat.

But it's also a challenge. The timing of this message is key as it comes as US President-elect Joe Biden prepares to take office.

Kim, who has also now been promoted to Secretary General (the highest rank of the ruling Worker's Party), is struggling to be heard outside his own country amidst the current tumult in the US.

But if the incoming US administration harbours any hopes of preventing Kim's nuclear ambitions, now might be the time to listen.

"Kim's announcements no doubt are meant to emphasise to the incoming US administration that a failure to take quick action will result in North Korea qualitatively advancing its capabilities in ways deleterious to US and South Korean interests," said Ankit Panda, author of Kim Jong-un and the Bomb, adding that Biden's administration should take this seriously.

Kim and Donald Trump met three times, but they failed to reach any agreement to end North Korea's nuclear weapons programme or the current crippling economic sanctions imposed on Pyongyang by the US and the UN.

The questions being asked on the Korean peninsula are whether Biden can do any better, and whether he should take Kim's threat seriously.

"I think the president-elect should take that at face value and, as soon as possible, clarify his perspective on what objectives his administration will seek in potential negotiations with North Korea," Panda said.

"If Kim sees no shift from the traditional US emphasis on comprehensive and total nuclear disarmament before any sanctions can be eased, I'd think he'll simply push ahead with testing and other activities," he said.

In his speech to the thousands of delegates at the Workers' Party Congress, Kim described the US as his country's "biggest enemy" - but he also added that he did not "rule out diplomacy".

The summits may have failed, but they have been glorified in technicolour in the main hall of the party Congress as an "event of the greatest significance in the history of world politics".

So there is wiggle room if Biden wishes to use it.

But Duyeon Kim, Adjunct Senior Fellow at the Center for a New American Security, said the US would have to make the first move and any deal will come at a cost.

"Kim Jong-un's price for the US is ending combined military drills with Seoul, removing sanctions, and refraining from making human rights criticisms before talks. Washington won't do these unconditionally," Duyeon Kim said.

"Even if negotiations resumed, Kim's price is high for any deal because he's been suggesting Cold War-style arms control talks in which both sides take mutual and reciprocal steps. But that doesn't make sense because there's no parity between US and North Korean nuclear arsenals."

It is my understanding that Trump and Kim Jong-un came close to a deal at their second meeting in Hanoi in February 2019. 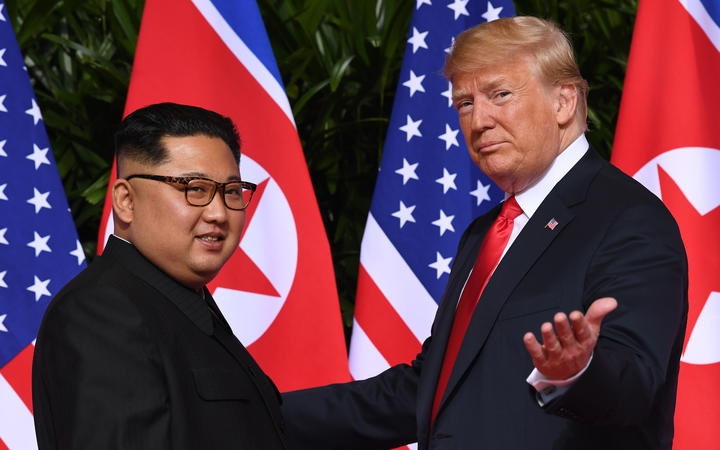 But that deal is no longer on the table, and Kim is now negotiating with a very different president.

What Kim is doing with this speech is trying to prove he has the upper hand.

He's resetting the starting point for talks - it's no longer about giving up his current arsenal, it's about preventing him from building a new and improved one.

It's not exactly a huge surprise that Kim harbours ambitions to expand his nuclear arsenal.

But what came as a surprise to many was that he announced a detailed list of his goals:

Of course, any new weapon will have to be tested, and with tests come tension.

Everyone on the Korean peninsula remembers the threat of "fire and fury" promised by Trump in 2017 after three long-range missile tests by North Korea.

South Korea is desperate to avoid a repeat of this ramped-up rhetoric and brinkmanship.

But Kim is laying down the gauntlet and perhaps wondering if he will get a reaction.

In his speech, he even discussed how far he would like his long-range missiles to fly. He wants them able to hit targets up to 15,000km away.

This range would make Pyongyang more than capable of hitting the US. 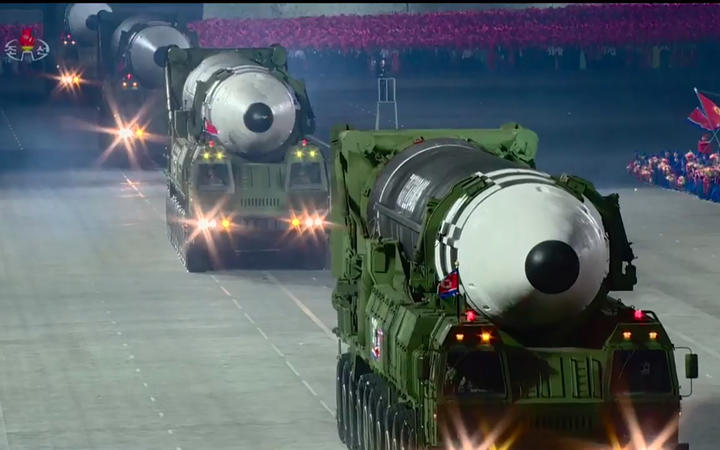 A screen grab taken from a KCNA broadcast on October 10, 2020 shows what appears to be new North Korean intercontinental ballistic missiles during a military parade on Kim Il Sung square in Pyongyang. Photo: KCNA / AFP

North Korea launched what is known as the Hwasong 15 in late 2017 and claimed then that the missile could reach any part of the US while carrying a nuclear warhead.

But it's not known if it has the technology needed to protect a nuclear warhead as it re-enters the atmosphere to deliver the weapon to its target.

As for the dream of a nuclear-powered submarine, analysts believe that may be a long way off for the regime.

However, North Korea "has proven remarkably resilient in the past", Panda said.

Kim has managed to make significant advances to its current nuclear programme despite a series of deepening economic crises.

"Even if Kim can't accomplish the entirety of his agenda, we should not bet against his will to push through and begin testing and manufacturing some of the systems he named," Panda said.

Crackdown amid reports of food crisis

The big question is, how will Kim pay for his ambitions as his country faces one of the bleakest economic situations in decades. Could this wish-list be an empty threat?

Five years ago, Kim promised his people economic prosperity. Those plans are now in tatters.

He opened the party Congress with an admission of failure.

The word "sorry" would not have been heard from his father or grandfather - but the young leader is now used to making apologies and was even seen in tears at a military parade in October as he outlined the stark situation facing his people. 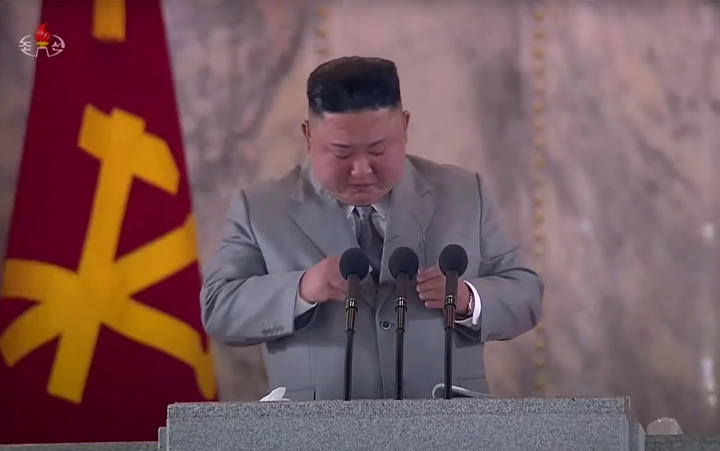 North Korean leader Kim Jong Un, as seen from a KCTV broadcast on October 10, 2020, pausing as he makes a speech prior to a military parade on Kim Il Sung square in Pyongyang. Photo: STR / KCTV / AFP

North Korea's borders were closed nearly a year ago to prevent the spread of Covid-19 from neighbouring China.

Pyongyang still denies having a single confirmed case of the virus, although there are many unconfirmed reports which claim Covid-19 has spread within the secretive state.

The border blockade has affected trade with China which is now down by almost 80 percent.

A series of typhoons and floods have devastated vital crops and houses.

NK News website reported empty supermarket shelves in North Korea's capital Pyongyang, and the prices of simple goods such as sugar have shot up, according to South Korea's spy agency.

Diplomatic sources have told me about certain goods piled up at the border, including medical supplies.

At best they are delayed. At worst they are not getting into the country at all. And, of course, strict economic sanctions remain in place.

North Korea is more cut off from the world than ever before.

Internally, there are signs that there is a crackdown on informal markets which had sprung up across the country as households tried to make extra money.

These small signs of capitalism had been tolerated for years - but now the state wants this money too.

Peter Ward, a PhD Candidate at the University of Vienna, studies the North Korean economy closely and said this predated the pandemic and that "some of it dates back to before Kim Jong-un took power".

"But the level of hostility toward market actors and the emphasis on restoring state retail we have seen since 2019 is notable and worrisome," he said.

So what can be done?

South Korea has been more than hinting that the Biden administration should signal to Pyongyang that it is willing to talk. 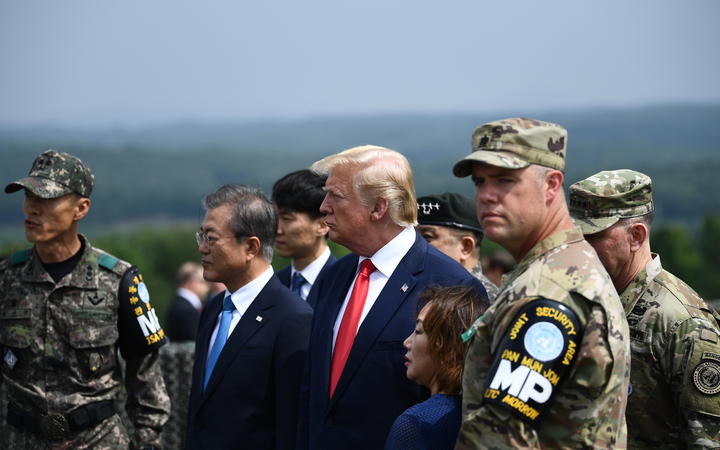 President Moon Jae-in said again in his New Year address that he was willing to meet North Korea's leader "anytime and anywhere".

But Kim rejected this olive branch, and often dismisses Seoul as a player in these discussions. He batted away suggestions of aid or collaboration on Covid-19 medications and vaccines.

Jeongmin Kim, an analyst from NK News, said it was "time Seoul lowered its expectations".

"This party congress made it even clearer to President Moon that North Korea is not interested in the symbolic, small stuff like inter-Korean cooperation," said Jeongmin Kim.

"But as with the US, North Korea did not close the doors completely on Moon's face, but left it conditional: almost saying, let's see how you behave.

"It is a tall order, siding less with the US and holding hands with North Korea. Mr Moon can't do that.

"But because North Korea left it as conditional and did not sever ties completely, Seoul will likely hold on to that hope and probably go ahead with what it can do - continued olive branches about public health co-operation to at least manage the risk of things blowing up, until Moon's term is over in 2022."

So all roads to a deal appear to lead through Washington. The new administration has a growing and demanding list of priorities; North Korea is just one of them and is struggling to get any attention.

However, most analysts believe that if the US president-elect fails to respond quickly, North Korea will take action, probably by testing ballistic missiles.

Kim Jong-un has set the stage. His message now is, "Your move, Mr Biden."