The coronavirus cluster on Sydney's northern beaches has grown to 83 cases, as record numbers of people come forward for testing in NSW. 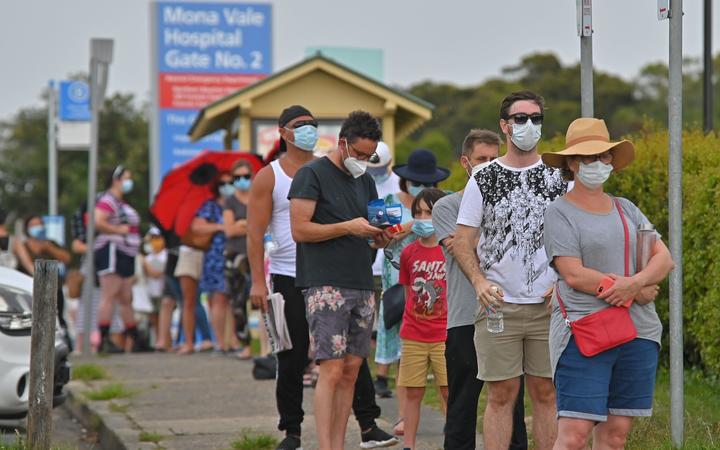 More than 38,000 people were swabbed for the virus in the 24 hours to 8pm yesterday (local time), and 15 new infections were recorded.

While the number of new cases is significantly lower than the 30 found in the previous reporting period, Premier Gladys Berejiklian said: "Unfortunately, one day's results doesn't tell us it's a trend."

She said authorities were monitoring the situation "on an hourly basis" and that they would on Wednesday morning provide an update as to what restrictions would be in place for Christmas.

"I would love to be able to tell everybody today what Christmas might look like in New South Wales or the northern beaches, but we're not in a position to do that yet," she said.

The cluster first emerged last week, and has already swollen to be the state's second biggest since July.

It has surpassed other outbreaks at the Crossroads Hotel (57 cases) and several funeral services at Bankstown (76 cases), and is closing in on the Thai Rock restaurant (114 cases).

The premier was cautiously optimistic that the number of new cases had decreased when compared to the previous two days.

"But as we know in a pandemic, things can be volatile and can move quickly," she said.

Minister of Health Brad Hazzard said contact-tracing efforts had been hampered by people who had lied when checking into venues.

"What we are finding is that some of the visitors to various venues still think that it is funny to be caught putting in there that you're Donald Duck or Mickey Mouse or a false phone number. That must stop," he said.

"This is a worldwide Covid pandemic and thinking it's smart to call yourself Donald Duck or Mickey Mouse is about as stupid as it gets. So that must cease."

The premier also scolded people who thought they were being funny.

"We do have, I believe, one of the best if not the best contact tracing team on the planet. But they can't contact trace people if they don't have the details," she said.

Among the latest venues to be visited by a confirmed case is the Salon for Hair in Turramurra on Sydney's north shore. The business has been linked to five infections.

Anyone who attended the salon between 15 and 18 December was asked to be tested and self-isolate for 14 days.

"We believe we have contacted the vast majority of people, but some people had incorrect or illegible contact details," she said.

"Please prompt your friends and relatives to check whether they attended on those days, follow the advice and get tested immediately and self-isolate if you're one or two people who we haven't managed to track down."

There has also been another case linked to the Rose of Australia hotel in Erskineville in Sydney's inner-west.

Anyone at the venue on 15 December between 7pm and 9pm should get tested and isolate.

Dr Chant said records at the venue were incomplete and urged people to come forward.

Berejiklian said NSW's current restrictions, including the lockdown across the Northern Beaches which came into force on Saturday evening, would be continually reviewed.