Vice-President-elect Kamala Harris will be the first woman to serve as vice-president of the United States, and is only the third person of colour to be elected to the executive branch of the US government behind Barack Obama. 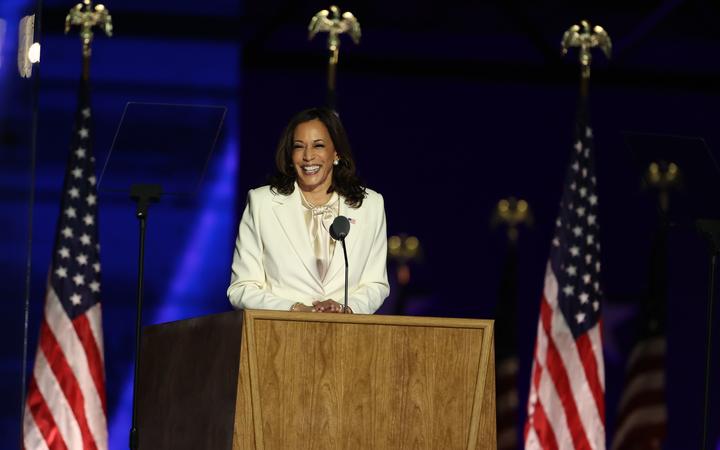 Harris, 56, said she was standing on the shoulders of America's pioneering women during her first speech after the US election was called for Joe Biden.

"While I may be the first woman in this office, I will not be the last," Harris told a cheering crowd.

The senator, who wore white as a nod to the suffragettes women's rights movement, walked out to greet ecstatic crowds in Wilmington, Delaware.

The song she walked out to was just as significant as her historic victory - Work That, by Mary J Blige.

It was the same song playing when she walked off the stage of the Democratic National Convention after becoming the first woman of colour nominated to a major political party's presidential ticket in US history.

While I may be the first, I won’t be the last. pic.twitter.com/R5CousWtdx

The senator and former Attorney-General of California paid tribute to her late mother, Shymala Gopalan Harris, who migrated to the US from India at the age of 19.

She thanked her and said this was a breakthrough moment for women in the county.

"When she came here from India at the age of 19, she maybe didn't quite imagine this moment, but she believed so deeply in an America where a moment like this is possible.

"And so I am thinking about her and about the generations of women, black women … Asian, white, Latina, Native American women."

"Because every little girl watching tonight sees that this is a country of possibilities."

Since the US presidential office was created in 1798, there have been 92 men in the position of either president or vice-president.

Harris, who is no stranger to breaking new ground in US politics, was the first black person to serve as Attorney-general in California and also the second black woman to be elected to the US Senate - the first was Illinois Democrat Carol Moseley Braun, who served from 1993 to 1999.

During her speech, Harris said the determination of women and black Americans before her and over the last 100 years provided her the opportunity to become vice-president-elect.

"Throughout our nation's history, [women] have paved the way for this moment tonight," she said.

"Women who fought and sacrificed so much for equality and liberty and justice for all.

"Including the black women who are often, too often, overlooked, so often prove they are the backbone of our democracy."

She addressed the challenging times the country has been going through, and thanked Americans for their vote, reassuring them of their decision.

"And I know times have been challenging, especially the last several months. The grief, sorrow and pain, worries, the struggles," she said.

Harris, who made an immediate impact on the US political scene, regularly questioning Donald Trump's cabinet appointees during confirmation hearings, addressed the children of the country, encouraging them to become leaders.

"To the children of our country, regardless of your gender, our country has sent you a clear message - dream with ambition, lead with conviction and see yourselves in a way that others may not, simply because they have never seen it before," she said.

And to the American people, no matter who you voted for, I will strive to be a vice-president, like Joe was to President Obama: loyal, honest and prepared, waking up every day, thinking of you and your family, because now is when the real work begins."

Shortly after the Biden-Harris victory, a plethora of social media congratulatory messages rolled in from celebrities to politicians.

In the months leading up to the election, many celebrities expressed their support for a Biden-Harris government, posting video messages encouraging people to vote for the Democrats.

I’m beyond thrilled that my friend @JoeBiden and our first Black and Indian-American woman Vice President, @KamalaHarris, are headed to restore some dignity, competence, and heart at the White House. Our country sorely needs it. pic.twitter.com/yXqQ3tYRoa

Other celebrities also chimed in to celebrate Harris's momentous appointment, including singer Lady Gaga and rapper Megan The Stallion.