Vote counting continues in the US, with all eyes on the tight races in a handful of states, which hold the keys to the White House. 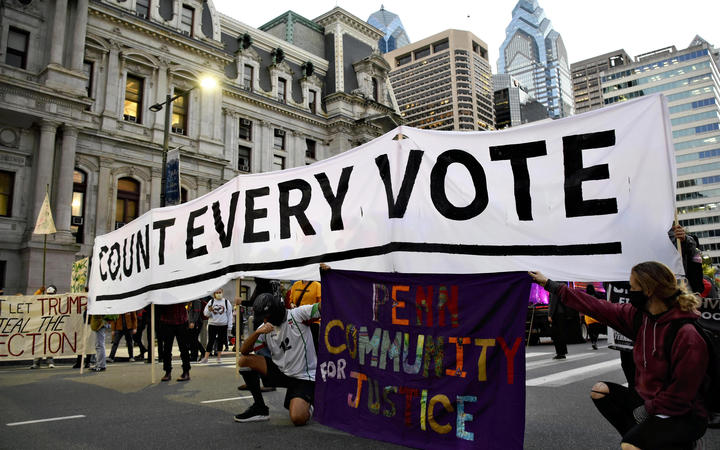 People in Philadelphia, Pennsylvania, demand that every vote be counted in the US election. Photo: Yomiuri

Arizona, Georgia, Pennsylvania, North Carolina and Nevada are all too close to call in the race between Donald Trump and Joe Biden.

Biden has a total of 253 electoral votes, and Trump has 213, according to CNN. Each man needs 270 to win. Trump has falsely claimed he won the election, and Biden stated he's confident he'll "emerge victorious".

But with a narrow margin in almost all of the outstanding states, the presidency is too close to call.

"This is a major fraud on our nation. We want the law to be used in a proper manner. So we'll be going to the US Supreme Court. We want all voting to stop," Trump said.

Trump did not provide any evidence to back up his claim of fraud or detail what litigation he would pursue at the Supreme Court.

Meanwhile, Biden and his running mate Kamala Harris called for every vote to be counted.

Every vote must be counted. No one is going to take our democracy away from us, not now, not ever.

Police in Portland said they arrested 10 people, while the New York Police Department said it made about 50 arrests.

There was also a protest from Trump supporters, some armed with rifles and handguns, who gathered outside an election centre in Arizona after unsubstantiated rumours that votes for the Republican president were deliberately not being counted.

This @mcsoaz team just arrived in full tactical gear, got a look at the crowd. Could be planning to make a move on demonstrators outside. pic.twitter.com/TCbKcXRNju

The race has tightened in Arizona, with Biden leading the state with 50.5 percent, and Trump following with 48.1 percent.

And the race has tightened the other way in Georgia, where Trump had an early lead. With 95 percent of the votes in, Trump leads with 49.6 percent and Biden is on 49.1 percent. State officials say they will count throughout the night.

The count also continues in the other states, which could swing the outcome. While a pathway for Biden is becoming clearer it could still go to either candidate.

But Republicans have retained their grip on the Senate - which leaves Congress mostly unchanged, despite Democrats' hope of wresting four seats from their opponents.