Doctors treating Russian opposition figure Alexei Navalny say he is out of an induced coma and his condition, since being poisoned, has improved. 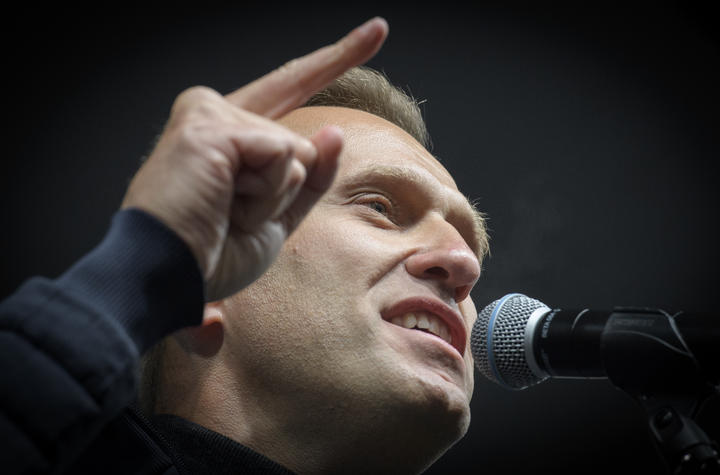 Alexei Navalny is being treated at the Charite hospital in Berlin. Photo: AFP

He is responding to verbal stimuli, they said. Navalny, 44, was flown to Germany after falling ill on a flight in Siberia in August.

His team allege he was poisoned on the orders of Russian President Vladimir Putin, who denies any involvement.

German doctors say the Putin critic was poisoned with a Novichok nerve agent.

On Monday, the Charité hospital in Berlin said in a statement that Navalny was being weaned off mechanical ventilation.

"He is responding to verbal stimuli. It remains too early to gauge the potential long-term effects of his severe poisoning," it said.

It also said doctors were in close contact with Navalny's wife.

Navalny's spokeswoman, Kira Yarmysh, tweeted: "News about Alexei. Today he was taken out of induced coma. Gradually he will be switched off from a ventilator. He responds to speech and to being addressed to."

What happened to Alexei Navalny?

Navalny fell ill on 20 August on a flight from Tomsk to Moscow. His supporters suspect poison was placed in a cup of tea at Tomsk airport.

"Alexei started moaning and screaming. He was clearly in pain. He was lying on the floor in the part of the plane reserved for cabin crew," a passenger seated near Navalny on the plane told BBC Russian.

The plane was diverted to Omsk, where the opposition politician was admitted to an emergency hospital. Russian officials initially refused to allow Navalny to be transferred abroad for medical treatment but after three days he was flown by air ambulance to Berlin.

Last week, doctors in Germany said the results of toxicology tests carried out at a military laboratory gave "unequivocal proof" that Navalny was poisoned with a Novichok nerve agent.

Doctors in Omsk insisted that no poisonous substances had been detected in Navalny's body when he was under their care.

On Monday, the Kremlin said it was "absurd" to blame Russia for Navalny's poisoning. "Attempts to somehow associate Russia with what happened are unacceptable to us, they are absurd," Mr Putin's spokesman, Dmitry Peskov, said.

Russian foreign ministry spokeswoman Maria Zakharova said the allegation that Novichok was used was not backed up by evidence.

A Novichok nerve agent was used to poison former Russian spy Sergei Skripal and his daughter in the UK in 2018. A UK investigation blamed the Russian state.

What is Navalny known for?

Navalny is an anti-corruption campaigner who has led nationwide protests against the Russian authorities. He first emerged as a blogger in 2008 and has in recent years become the most prominent opposition politician in Putin's Russia.

He has called Putin's party a place of "crooks and thieves" that is "sucking the blood out of Russia", and has faced attacks in the past.

However, he has been banned from standing against Putin in recent elections because of a conviction for embezzlement. He denies the crime, saying his legal troubles are Kremlin reprisals for his fierce criticism.

On Monday, the British government summoned the Russian ambassador to the UK "to register deep concern about the poisoning".

"It's completely unacceptable that a banned chemical weapon has been used and Russia must hold a full, transparent investigation," Foreign Secretary Dominic Raab said on Monday.

In Germany there is growing pressure for Chancellor Angela Markel to take a tougher stance over the incident. Last week, she said Navalny was the victim of attempted murder and that the world would look to Russia for answers.

For the first time, the German government is no longer ruling out stopping the construction of the controversial Nord Stream 2 pipeline, says the BBC's Damien McGuinness in Berlin.

The huge energy project would double the flow of Russian gas to Europe using a pipeline beneath the Baltic Sea that is nearing completion.

A spokesman for the German government said on Monday that it was too early to make a decision about Nord Stream. He said that Russia had "serious questions" to answer but that a response could not be expected in "three to four days".

The project must be completed despite current "difficulties", said Russian Energy Minister Alexander Novak according to Interfax news agency.

The European Union has demanded a "transparent" investigation by the Russian government.

US President Donald Trump has refused to condemn Russia saying the case was "tragic" but he has not seen proof of Putin's involvement.

There have been a number of previous attacks on high-profile critics or opponents of Putin, including politicians, intelligence officers and journalists. The Kremlin has always denied involvement.