Queensland will close its border to all of New South Wales and the ACT from Saturday after the state recorded one new case of Covid-19 overnight. 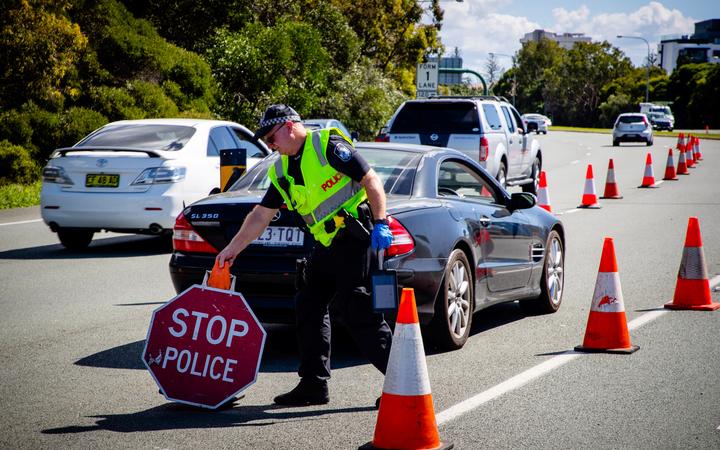 A Queensland police officer moves a stop sign at a vehicle checkpoint on the Pacific Highway, along the state's border with New South Wales, in Brisbane on April 15, 2020. Photo: AFP / Patrick Hamilton

The 68-year-old Queensland woman was diagnosed with the virus in the past 24 hours and authorities are still investigating the source of the infection.

Two historic cases have also been added to the state's total of 1088 cases.

The hotspot declaration means anyone travelling from NSW or the nation's capital will soon be banned from entering the Sunshine State.

Queenslanders who return after travelling there will be sent to mandatory hotel quarantine for 14 days at their own expense.

'We cannot risk a second wave'

"We cannot risk a second wave. We have to act decisively," she said.

"We have to put Queenslanders first."

The move means New South Wales and the ACT will join Victoria on Queensland's list of declared coronavirus hotspots.

Palaszczuk said her decision was influenced by a number of people who had breached the state's border requirements, by lying to authorities about their whereabouts.

"This is the right decision for Queensland," she said.

"We cannot put Queenslanders at risk - it is too important."

The Premier said losing tourism from the southern states would be difficult, but it was a minimal drawback compared to the economic pain expected from a second wave.

"It is going to be tough for some of our small businesses in some of those communities," the Premier said.

"But what would be more catastrophic is to take Queensland backwards.

"My job is to protect Queenslanders Health and to protect our economy and our lifestyle."

Border crossings checks to be stepped up

The declaration comes as Queensland police closed an investigation into a security guard who was granted an exemption before testing positive to coronavirus, saying the man "did nothing wrong".

Deputy Police Commissioner Steve Gollschewski said he had evidence people were travelling from Covid-hotspots into other areas such as Canberra, to flout border restrictions.

"We're currently investigating a male person who we will allege ... has deliberately driven from Sydney out of a hotspot into the ACT to get a flight to come to Brisbane and then connected into Cairns," he said.

"And that person has expressed they were frustrated with the restrictions, didn't like them and wanted to go to work.

"So a quite selfish approach."

He also urged Queenslanders to get home before the weekend lockdown.

"If you're a Queenslander in New South Wales, please come home," Miles said.

"If you're a Queenslander who has any plans to travel to New South Wales, please change those plans now.

"They will not be able to travel into Queensland via the Queensland/New South Wales border."

Miles said the border closures would be reviewed at the end of August.