Rupert Murdoch's son has resigned from News Corp's board of directors, saying he disagreed with some of the editorial and strategic decisions made by the company. 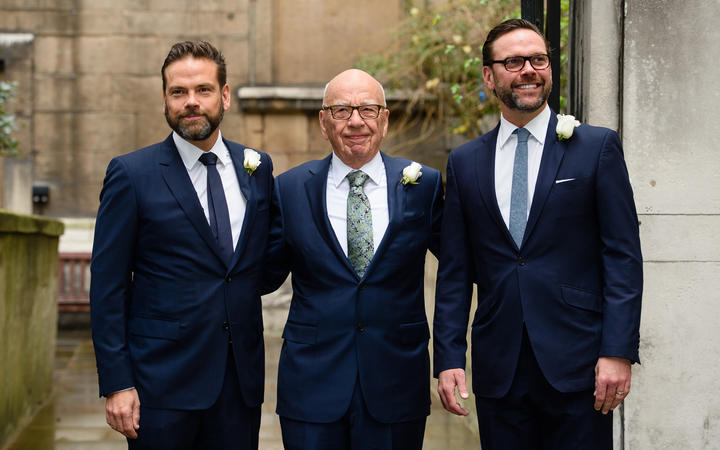 James Murdoch (far right) had served on the board alongside his father (middle) and older brother Lachlan Murdoch (left). Photo: AFP

News Corp is Rupert Murdoch's media giant that owns a number of companies around the world, including Australian outlets like The Australian, News.com.au and Foxtel.

James Murdoch had served on the board alongside his father and older brother Lachlan Murdoch.

"My resignation is due to disagreements over certain editorial content published by the company's news outlets and certain other strategic decisions," he wrote.

The resignation will take effect immediately.

He had recently taken issue with News Corp's coverage of the summer of bushfires in Australia and climate change more generally.

In January, a spokesperson for James Murdoch and his wife, Kathryn, told The Daily Beast that the pair's "frustration with some of News Corp and Fox's coverage of the topic is … well known".

"They are particularly disappointed with the ongoing denial of the role of climate change among the news outlets in Australia, given obvious evidence to the contrary," the spokesperson said.

At the time, News Corp's executive chairman defended the climate change coverage by The Australian, The Daily Telegraph and Herald Sun.

"Our coverage has recognised that Australia is having a serious conversation about climate change and how to respond to it," he said.

"However, it has also reflected there are a variety of views and opinions about the current fire crisis."