Former emergency leaders, climate scientists, doctors and community members are calling on the Federal Government to impose a levy on the fossil fuel industry for a climate disaster fund to help pay for the impact of natural disasters. 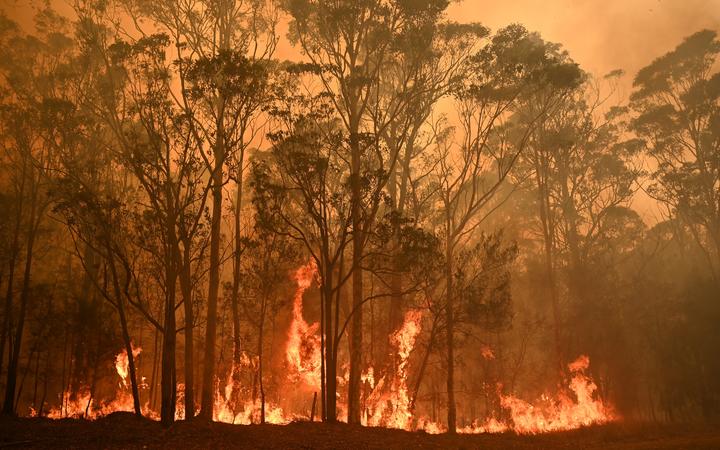 A bushfire burns in the town of Moruya, south of Batemans Bay, in New South Wales on 4 January 2020. Photo: AFP

The call is one of 165 recommendations by the Emergency Leaders for Climate Action (ELCA), a group of more than 150 experts and affected community members, in a bid to improve bushfire readiness, response and recovery.

It follows the ELCA National Bushfire Summit, which took place in June and July - and it's hoped the findings will be included in the Royal Commission report, which is due to handed to the Government next month.

"The escalation in natural disasters is driven by climate change," he said.

"There should be a levy on the fossil fuel industry, given all their tax breaks.

"We had the hottest, driest year ever - a year that would not have happened without the impact of climate change.

"It drove the worst bushfires in Australia's history - they were bigger, hotter, faster and more destructive what we've ever experienced before."

The report, the Australian Bushfire and Climate Plan, to be released later today, describes a "new bushfire era where we must fundamentally rethink how we prepare for and manage this growing threat".

"There is no doubt that bushfires in Australia have become more frequent, ferocious and unpredictable," the reports states.

The coalition of experts includes ELCA members and the Climate Council of Australia, who more than a year ago warned of a catastrophic bushfire season.

"Sadly, those warnings fell on deaf ears and, as the world watched on in horror, those same warnings became a harsh reality."

The ELCA report, which includes former emergency services commissioners from all over Australia, has accused the Federal Government of underestimating and ignoring "the rapidly escalating threat of climate change".

"Communities and ecosystems were already being pushed beyond their ability to adapt."

The group says its recommendations would cost billions of dollars to implement.

It is calling for greater funding for firefighting and land management to ensure faster identification and dousing of new fires.

Mr Mullins stressed Australia can no longer rely on assistance with aerial firefighting from overseas due to "overlapping bushfire seasons".

The report identifies a gap in aerial firefighting resources, specifically CL-415s - so-called "Super Scoopers" - that can drop 6000 litres of water or firefighting foam at a time.

"We need a large number of these," Mr Mullins told the ABC.

The group is also advocating for an Indigenous-led National Cultural Fire Strategy, and greater action to address the health effects of bushfires.

Smoke from the recent bushfires resulted in more than 400 deaths and another 4000 people being treated in hospital, the ELCA said.

The Federal Minister for Emergency Management has been contacted for comment.