The move by the United States government to shut down China's consulate in Houston is an attempt to blame Beijing for American failures ahead of presidential elections in November, Chinese state media has said in editorials today. 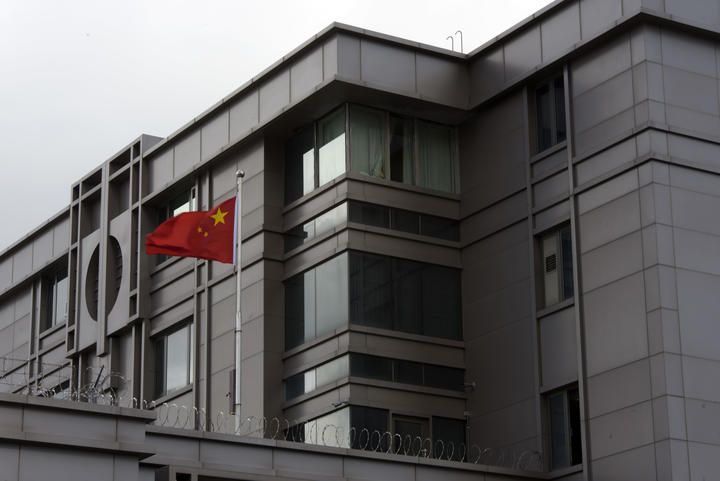 The Chinese flag flies outside the Chinese consulate in Houston after the US State Department ordered China to close it yesterday. Photo: AFP

The United States yesterday said it had given China 72 hours to close the consulate "to protect American intellectual property and Americans' private information".

China said the order was an "unprecedented escalation" by Washington, and a source said Beijing was considering shutting the US consulate in Wuhan in retaliation.

US President Donald Trump said that other consulate closures were "always possible".

The decision marked a dramatic escalation of tensions between the world's two biggest economies amid fresh accusations of Chinese espionage in the United States and calls by US Secretary of State Mike Pompeo for a new global coalition against Beijing.

China's embassy to the United States described the move to close the Houston consulate as a "political provocation" and called on Washington to "immediately revoke" the decision. Foreign ministry spokeswoman Hua Chunying wrote on Twitter that China would "surely react with firm countermeasures".

The official English-language newspaper China Daily described the move as "a new gambit in the US administration's bid to paint China as a malevolent actor on the world stage, and thus make it an outlaw to the international community."

"The move shows that lagging behind his presidential election opponent in the polls... the US leader is going all out in his attempts to portray China as an agent of evil," it added.

"The November presidential election is driving Washington mad," it said.

In a statement released on Thursday morning, the Chinese embassy in Washington accused the United States of "groundless fabrications" about the actions of China's diplomatic missions and urged it to "immediately revoke this erroneous decision".

"It's time to step on the brakes and return to the right direction!" the embassy posted separately on its official Twitter account.

According to US court filings, the Federal Bureau of Investigation is also alleging that a Chinese researcher accused of visa fraud and concealing ties to the military is now holed up in China's consulate in San Francisco.

Other Chinese researchers at US universities have also been arrested for visa fraud, the filings showed.