The United Arab Emirates' historic first mission to Mars is now underway, after a successful launch in Japan. 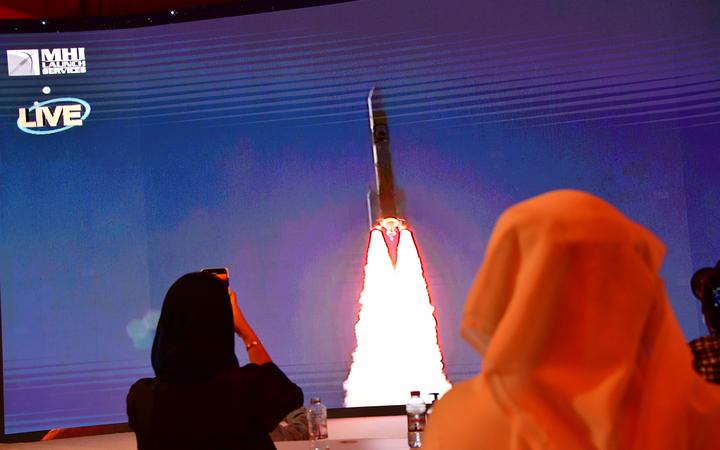 A screen broadcasting the launch of the 'Hope' Mars probe at the Mohammed Bin Rashid Space Centre in Dubai, UAE. Photo: AFP

The Hope probe launched on an H2-A rocket from Tanegashima spaceport, and is now on a 500-million-km journey to study Mars' weather and climate.

Two previous attempts to launch the probe in the past week had to be cancelled because of adverse weather.

Its arrival in February 2021 is set to coincide with the 50th anniversary of the UAE's formation.

Hope is one of three missions to Marsh launching this month.

The US and China both have surface rovers in the late stages of preparation.

We have lift-off. H2A, the rocket carrying the Hope Probe to space, has launched from the Tanegashima Space Centre in Japan.#HopeMarsMission pic.twitter.com/wjuFX3G1TP

Why is the UAE going to Mars?

The UAE has limited experience of designing and manufacturing spacecraft - and yet here it is attempting something only the US, Russia, Europe and India have succeeded in doing. But it speaks to the Emiratis' ambition that they should dare to take on this challenge.

Their engineers, mentored by American experts, have produced a sophisticated probe in just six years - and when this satellite gets to Mars, it's expected to deliver novel science, revealing fresh insights on the workings of the planet's atmosphere.

In particular, scientists think it can add to our understanding of how Mars lost much of its air and with it a great deal of its water.

The Hope probe is regarded very much as a vehicle for inspiration - something that will attract more young people in the Emirates and across the Arab region to take up the sciences in school and in higher education.

The satellite is one of a number of projects the UAE government says signals its intention to move the country away from a dependence on oil and gas and towards a future based on a knowledge economy.

But as ever when it comes to Mars, the risks are high. A half of all missions sent to the Red Planet have ended in failure. Hope project director, Omran Sharaf, recognises the dangers but insists his country is right to try.

"This is a research and development mission and, yes, failure is an option," he told BBC News.

"However, failure to progress as a nation is not an option. And what matters the most here is the capacity and the capability that the UAE gained out of this mission, and the knowledge it brought into the country."

How has the UAE managed to do this?

The UAE government told the project team it couldn't purchase the spacecraft from a big, foreign corporation; it had to build the satellite itself.

This meant going into partnership with American universities that had the necessary experience. Emirati and US engineers and scientists worked alongside each other to design and build the spacecraft systems and the three onboard instruments that will study the planet.

The Hope probe will travel 495 million km to space with a cruise speed of 121,000 km/hr in the first ever Arab mission to the Red Planet. The data gathered by the probe will add a new dimension to the human knowledge. This is our latest contribution to the world. pic.twitter.com/GbVSfjQSRL

While much of the satellite's fabrication occurred at the Laboratory for Atmospheric and Space Physics (LASP) at the University of Colorado, Boulder, considerable work was also undertaken at the Mohammed Bin Rashid Space Centre (MBRSC) in Dubai.

LASP's Brett Landin believes the Emiratis are now in a great place to do another mission on their own.

"I could give you the process for fuelling a spacecraft, but until you've put on an escape suit and transferred 800kg of highly volatile rocket fuel from storage tanks into the spacecraft, you don't really know what it's like," the senior systems engineer said.

"Their propulsion engineers have now done it and they know how to do it the next time they build a spacecraft."

What science will Hope do at Mars?

The Emiratis didn't want to do "me too" science; they didn't want to turn up at the Red Planet and repeat measurements that had already been made by others. So they went to a US space agency (Nasa) advisory committee called the Mars Exploration Program Analysis Group (MEPAG) and asked what research a UAE probe could usefully add to the current state of knowledge.

MEPAG's recommendations framed Hope's objectives. In one line, the UAE satellite is going to study how energy moves through the atmosphere - from bottom to top, at all times of day, and through all the seasons of the year.

It will track features such as lofted dust which on Mars hugely influences the temperature of the atmosphere.

It will also look at what's happening with the behaviour of neutral atoms of hydrogen and oxygen right at the top of the atmosphere. There's a suspicion these atoms play a significant role in the ongoing erosion of Mars' atmosphere by the energetic particles that stream away from the Sun.

This plays into the story of why the planet is now missing most of the water it clearly had early in its history.

To gather its observations, Hope will take up a near-equatorial orbit that stands off from the planet at a distance of 22,000km to 44,000km.

"The desire to see every piece of real estate at every time of day ended up making the orbit very large and elliptical," explained core science team lead on Hope, David Brain from LASP.

"By making those choices, we will for example be able to hover over Olympus Mons (the largest volcano in the Solar System) as Olympus Mons moves through different times of day. And at other times, we'll be letting Mars spin underneath us.

"We'll get full disc images of Mars, but our camera has filters, so we'll be doing science with those images - getting global views with different goggles on, if you like."