A reservoir behind Ethiopia's disputed Grand Renaissance dam on the River Nile has started filling with water - a day after talks with Egypt and Sudan ended without agreement, officials say. 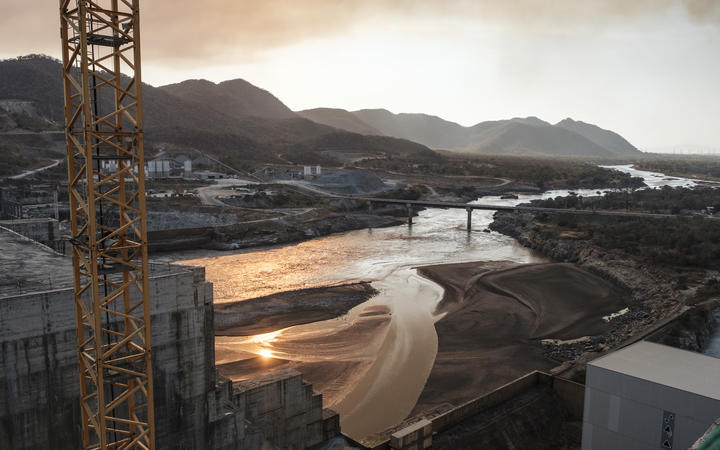 The Blue Nile river as it passes through the Grand Ethiopian Renaissance Dam (GERD), near Guba in Ethiopia. Photo: AFP

Ethiopia sees the hydroelectric project as crucial for its economic growth.

Egypt and Sudan, which are downstream, fear the large dam will greatly reduce their access to water.

Years of fraught negotiations have failed to reach a consensus on how and when to fill the reservoir, and how much water it should release.

Egyptian Foreign Minister Sameh Shoukry has previously warned that filling and operating the dam without an agreement "that protects the downstream communities... would heighten tensions and could provoke crises and conflicts that further destabilise an already troubled region".

A conflict between Egypt and Ethiopia, which are both US allies, would put millions of civilians at risk.

What did the minister say?

On Wednesday, Seleshi told Ethiopian state broadcaster EBC that water had started filling the reservoir "in line with the natural process", adding: "The construction of the dam and the filling of the water go hand in hand."

His comments come after satellite images taken between 27 June and 12 July show a steady increase in the amount of water being held back by the dam.

The reservoir behind the dam will fill naturally during Ethiopia's rainy season, which began in June and lasts until September.

The latest satellite images caused a wave of excitement in Ethiopia over the £3.2 billion ($NZ6.13b) Grand Ethiopian Renaissance Dam (Gerd) project - but caused concern in Egypt.

When fully operational, the dam will become the largest hydro-electric plant in Africa, providing power to some 65 million Ethiopians, who currently lack a regular electricity supply. However, Egypt gets almost all of its water from the Nile and fears the dam will reduce supplies. 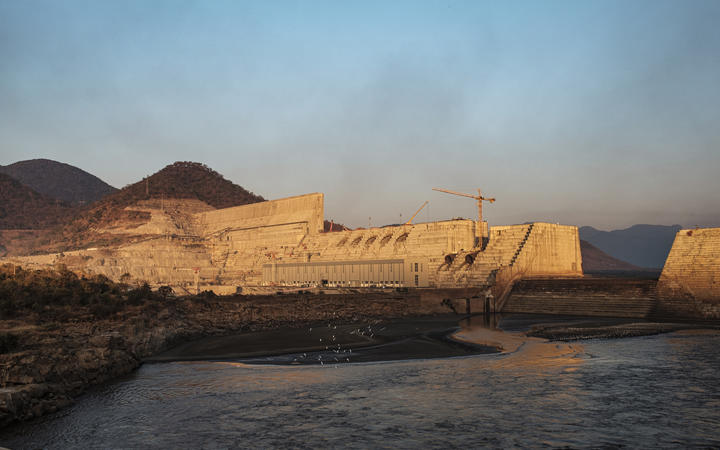 A general view of constructoin on the Grand Ethiopian Renaissance Dam (GERD), near Guba in Ethiopia, on December 26, 2019. Photo: AFP

How will the dam be filled? 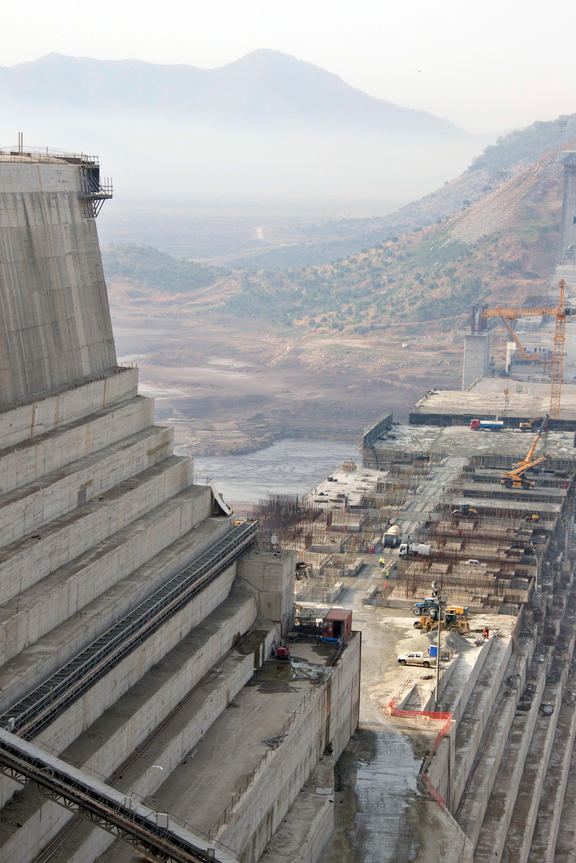 The minister's announcement has confirmed that rain water has already started to build up. Ethiopia had always said it would fill the dam in July, while Egypt had warned it to delay while talks continued.

Given the stage that the construction is at "there is nothing that can stop the reservoir from filling to the low point of the dam", Dr Kevin Wheeler, who has been following the Gerd project since 2012, told the BBC.

From the start of the process in 2011, the dam has been built around the Blue Nile as it continued to flow through the enormous building site.

Builders could work on the vast structures on either side of the river without any problem. In the middle, during the dry season, the river was diverted through culverts, or pipes, to allow that section to be built up.

The bottom of the middle section is now complete and the river is currently flowing through bypass channels at the foot of the wall.

As the impact of the rainy season begins to be felt at the dam site, the amount of water that can pass through those channels will soon be less than the amount of water entering the area, meaning that it will back up further and add to the lake that will sit behind the dam, Dr Wheeler said.

The Ethiopian authorities can close the gates on some of the channels to increase the amount of water being held back but this may not be necessary, he added.

How long will it take to fill?

In the first year, the Gerd will retain 4.9 billion cubic meters (bcm) of water, taking it up to the height of the lowest point on the dam wall, allowing Ethiopia to test the first set of turbines. On average, the total annual flow of the Blue Nile is 49bcm.

In the dry season the lake will recede a bit, allowing for the dam wall to be built up and in the second year a further 13.5bcm will be retained.

By that time, the water level should have reached the second set of turbines, meaning that the flow of water can be managed more deliberately.

Ethiopia says it will take between five to seven years to fill up the dam to its maximum flood season capacity of 74bcm. At that point, the lake that will be created could stretch back some 250km (155 miles) upstream.

Between each subsequent flood season the reservoir will be lowered to 49.3bcm.

Egypt, which almost entirely relies on the Nile for its water needs, is concerned that in most years of the filling it is not guaranteed a specific volume of water.

And once the filling stage is over, Ethiopia is reluctant to be tied to a figure of how much water to release.

In years of normal or above average rainfall that should not be a problem, but Egypt is nervous about what might happen during prolonged drought.

What is happening with the talks?

Negotiations over the mega dam have failed to reach agreement after nearly a decade of talks between Egypt and Ethiopia, with Sudan caught in between.

Last year, Egypt sought the intervention of the US on the impasse.

Egyptian President Abdel-Fattah al-Sisi requested that US President Donald Trump mediate the conflict, which Ethiopia was initially reluctant to accept.

The US and the World Bank got involved but failed to get Ethiopia to sign up to a document agreed with Egypt in February.

When the US then said that the dam should not be completed without an agreement, Ethiopia accused the superpower of overstepping its role as a neutral observer.

The African Union (AU) has now said it will try to find a solution.