A British man who joined the Islamic State group in Syria has died while being held in prison in the country, the BBC has been told. 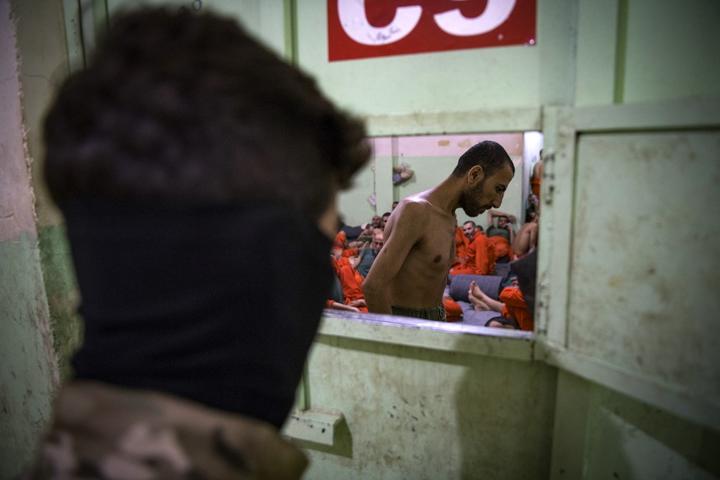 One source said that Ishak Mostefaoui, originally from east London, was killed while attempting to escape custody.

Another said the death came during serious disorder in a jail in Hassakeh, which houses IS prisoners from various countries.

The death and surrounding circumstances have not been officially confirmed.

After being captured last year, the 27-year-old was held in a prison in north-east Syria controlled by the Kurdish-led, US-backed Syrian Democratic Forces.

He is the first British IS-supporter to die in SDF custody. Sources said he was one of around 10 British men and 30 British women being held by the militia.

The prison where he was held is a converted school. When the BBC spoke to him there last October he admitted joining IS.

The general situation in the prisons and camps where IS prisoners are being held has deteriorated this year and there have been several riots.

The British government has refused to allow adult prisoners to return to the UK, saying they should be put on trial in the region.

A government spokesman told the BBC the Foreign Office had advised against all travel to Syria since 2011.

They added: "Those who chose to leave the UK and fight for, or support, Daesh potentially pose a very serious national security risk."

The SDF has said foreign states should take responsibility for their citizens, stating earlier this year that IS prisoners were "a time bomb" and "we need to set up international courts, under UN jurisdiction, and try them in NE Syria where they perpetrated their crimes".

Several countries have arranged for the return of some citizens.

Ministers have said that, of the estimated 900 people who have left the UK for Syria to join violent Islamist groups, 20 percent have died, 40 percent have returned to the UK, and 40 percent are still in the region.

There are differing accounts of how Mostefauoi died.

The BBC has been given the two versions: that he was shot while trying to escape, and the other that he was killed during recent rioting.

An IS propaganda channel on a messaging app claims he was killed while trying to get water during a siege of the prison that also saw food and medication withheld from inmates.

Last year, the BBC revealed that Mostefaoui was one of several University of Westminster students to have travelled to Syria.

His Algerian family had settled in London when Mostefaoui was five. He was described as a popular, football-loving boy, brought up in a home that was opposed to extremism, but he later became increasingly radicalised while a student.

In April 2014, Mostfaoui told his father that he was going to Amsterdam for a few days, leaving with just a small bag, and he then secretly made his way to Syria.

In 2018, Mostefaoui had his British citizenship revoked.