After days of record spikes in new Covid-19 cases and hospitals warning they could run out of beds, President Donald Trump's White House has sought to convey that all was well in the battle against the coronavirus and touted efforts to get the US economy moving again. 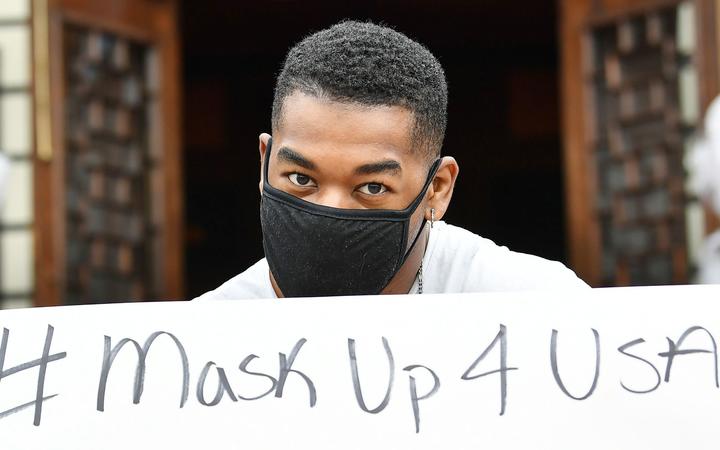 A man wears a mask at a pro-mask pop-up fashion show in Los Angeles. Photo: AFP

Just two weeks ago, the United States was reporting about 22,000 new cases a day. It has now reported more than 40,000 cases for seven straight days and broken records for new cases three days in a row, according to the tally.

New infections rose in 37 out of 50 US states in the past 14 days compared with the two weeks prior in early June, according to a Reuters analysis.

Florida reported more than 10,000 new coronavirus cases today, the biggest one-day increase in the state since the pandemic started.

The United States has now reported more than 128,000 coronavirus-related deaths, nearly a quarter of the global total.

The rising number of cases follows moves in many states to allow businesses to lift strict shutdowns, which have boosted job growth but also appear to have accelerated the spread of the virus as people returned to restaurants, bars and retail businesses.

As the wave of new cases accelerates, some states have paused or scaled back their re-openings, while closing beaches and cancelling fireworks displays over the upcoming US Independence Day weekend. 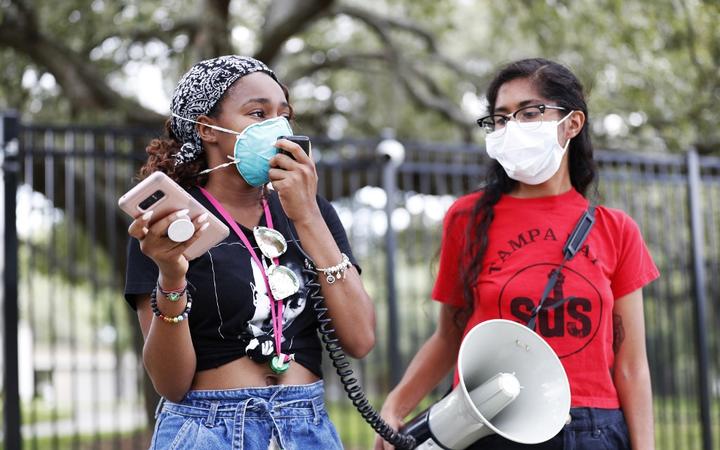 Still, a Labour Department report out today showed the window of re-openings had a dramatic impact on hiring, with the United States creating jobs at a record clip in June.

"Today's announcement proves that our economy is roaring back," Trump told reporters at the White House, while touting his administration's efforts to beat back the virus as "a historic thing".

The data showing a gain of 4.8 million jobs does not reflect that governors of states hit hardest by new infections have halted or reversed moves to re-open in recent days.

"More than ever, we're concerned about the worsening health situation and its impact on the burgeoning recovery. Rebounding mobility and poor use of protective equipment will make for a dangerous summer cocktail," Oxford Economics analyst Gregory Daco wrote.

Texas Governor Greg Abbott has decreed that face masks must be worn in all counties with over 20 coronavirus cases, billing the measure as a requirement to avoid another economic shutdown.

Wearing face coverings to slow the spread of the coronavirus is unpopular among Abbott's conservative Republican base in Texas, but he said in a video released today that the action was now absolutely necessary.

"In the past few weeks, there has been a swift and substantial spike in coronavirus cases," Abbott said. "We need to refocus on slowing the spread. But this time, we want to do it without closing down Texas again."

Face masks must be used in all public buildings and outside when social distancing of at least 2 metres cannot be maintained, the governor said. Those violating the order will be given one warning. After that, they can be issued a fine of up to $US250 ($NZ380). Nobody can be jailed for defying the order, he said.

After avoiding major outbreaks in April and May, Texas has become a coronavirus hotspot. It reported nearly 8000 new infections today.

Abbott's order marks a major reversal. For over two months, he ignored calls by the Democratic leaders of Texas' metropolitan areas to mandate mask wearing.

He refused to allow leaders in Houston to enforce their own face-covering mandate with penalties, undercutting their ability to slow the spread of the virus. Hospital officials in Houston have said intensive care beds there are now in short supply. 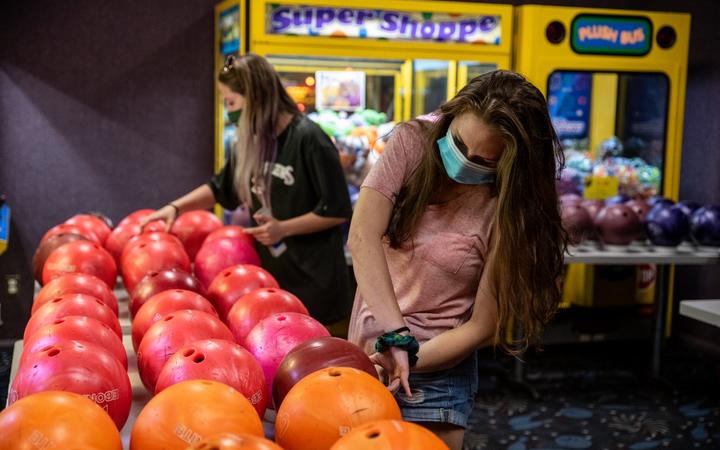 Staff at a bowling alley in Austin, Texas. Face masks must now be worn over a large part of the state where Covid-19 cases are rising rapidly. Photo: AFP

South Africa to extend use of military

South Africa's President Cyril Ramaphosa has informed parliament of his decision to extend the deployment of 20,000 soldiers, a drop from 76,000, until 30 September to help enforce Covid-19 restrictions as the country reported its biggest single-day jump in coronavirus cases.

Ramaphosa first deployed 2820 members of the South African National Defence Force (SANDF) a few days before enforcing a nationwide lockdown in late March. The number was increased to 76,000 in April as the health threat grew.

At the end of March, Ramaphosa announced one of the toughest lockdowns anywhere in the world, banning anyone but essential workers from leaving home except to buy food or medicine, and prohibiting alcohol sales, when South Africa had just 400 cases.

The country started slowly reopening parts of the economy from May but infection rates have started to spike again. South Africa reported 8728 confirmed infections today, taking the total count to 168,061, according to health ministry data. Deaths rose by 95 to 2844. 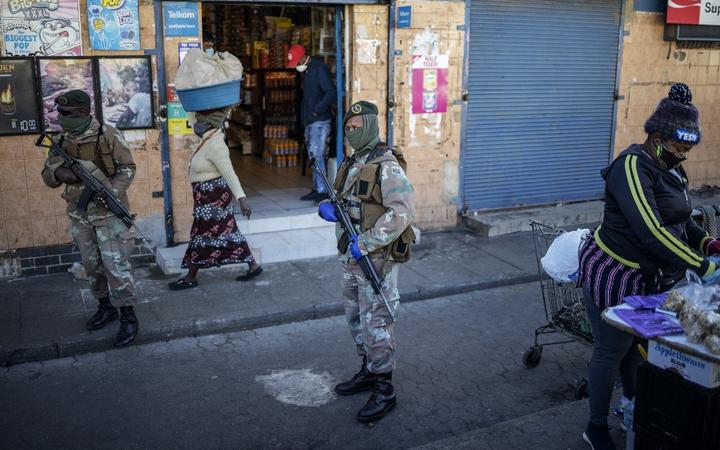 Soldiers on patrol in a business area of Soweto in Johannesburg. Photo: AFP

A sewage-based coronavirus test could be an "easy win" that would pick up infection spikes up to 10 days earlier than with existing medical-based tests.

Scientists led by UK's Centre for Ecology and Hydrology are working on a standardised test to "count" the amount of coronavirus in a wastewater sample.

"The earlier you find [a signal], the earlier an intervention can happen," said lead researcher Dr Andrew Singer. "That means lives will be made much more liveable in the current crisis."

A network of scientists have already teamed up with local water companies to collect samples of untreated sewage from treatment plants; the first stage in mapping the outbreak through the sewers.

Newcastle University's Prof David Graham pointed out that it currently took seven-to-10 days to establish whether a person had the disease, but he said: "We can collect a sample of sewage and give you an exact number per person [in the community] within the next day."

Prime Minister Boris Johnson will urge Britons to act responsibly when pubs reopen this weekend, warning that businesses, livelihoods and the future of the whole economy depends on it.

The latest phase in a gradual reopening of the British economy on Saturday will see pubs in England open their doors for the first time since mid-March, as well as the reopening of restaurants, museums, hotels and other businesses.

The much-awaited event has been dubbed "Super Saturday" in the media, sparking worries that after months cooped up indoors, some could get carried away and risk spreading Covid-19.

Many of the elements that define a pub will be missing when they reopen: with numbers limited, there will be no crowds, no standing at the bar and no live music. Venues will have to keep a record of customers in case of a virus outbreak.

Johnson has previously said he is looking forward to visiting a pub himself, but has warned that patrons will have to stick to new rules. 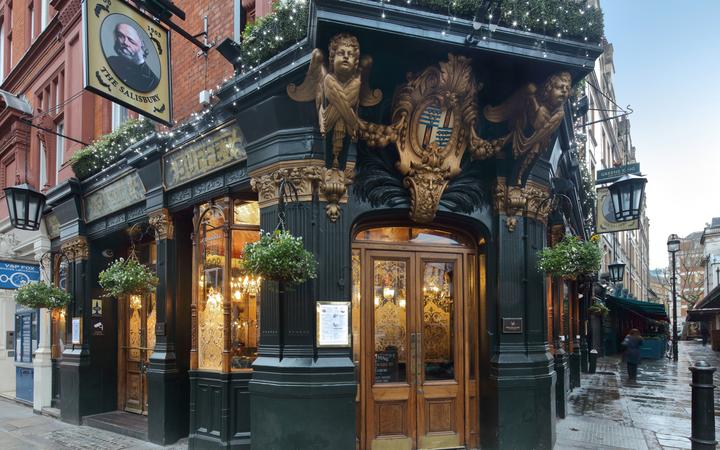 The Salisbury, a traditional Victorian public house, in Covent Garden, in London is one of thousands set to reopen across the UK after closures lasting nearly four months. Photo: AFP

Meanwhile, the government said it will lift its Covid-19 quarantine requirement for people arriving in England from countries including Germany, France, Spain and Italy from 10 July.

Under the existing rules, travellers must self-isolate for 14 days on entering the country, something airlines and the travel industry have said will cost thousands of jobs and inflict further damage on the economy.

The government said it expected countries included on the quarantine-free list for England would reciprocate by relaxing their own travel restrictions.