Thousands of demonstrators took to a knee in the grass outside the US Capitol chanting "silence is violence" and "no justice, no peace," just before a government-imposed curfew. 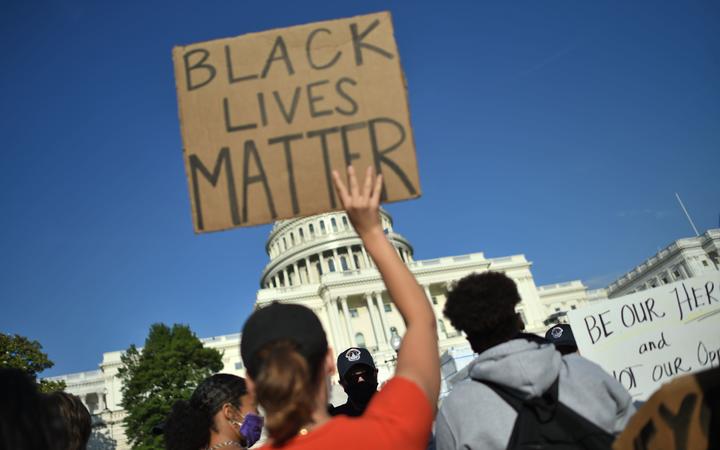 Protesters hold signs as they demonstrate in front of the United States Capitol in Washington, DC. Photo: AFP

The throng at the capitol then stood up and chanted "take a knee" and "who do you protect?" as officers faced them.

Evening curfews were ordered in dozens of cities following a week of protests over the death of 46-year-old George Floyd in Minneapolis police custody.

Largely peaceful during the day, crowds have in previous nights erupted into vandalism, arson and looting after dark.

President Donald Trump has called for the National Guard or US military to crack down on what has called "hoodlums," "thieves" and "thugs" responsible for the violence, blaming state governors or local officials for failing to intervene.

On Tuesday protesters in several cities massed peacefully in large numbers, including in Los Angeles, Washington and Philadelphia. In New York City, thousands held an orderly march up 86th Street, chanting and holding signs saying "No justice, no peace" and "say his name, George Floyd," followed by a silent vigil.

In Floyd's hometown of Houston, thousands gathered for a march organized by his friends and family.

On Hollywood Boulevard in Los Angeles, hundreds of people filled the street from curb to curb. Others gathered outside Los Angeles Police Department headquarters, in some cases hugging and shaking hands with a line of officers outside.

Los Angeles was the scene of violent riots in the spring of 1992, following the acquittal of four policemen charged in the beating of black motorist Rodney King, that saw more than 60 people killed and estimates of $1 billion in damage.

Floyd died after a white policeman pinned his neck under a knee for nearly nine minutes in Minneapolis on 25 May, reigniting the explosive issue of police brutality against African Americans.

The officer who knelt on Floyd, 44-year-old Derek Chauvin, has been charged with third-degree murder and second-degree manslaughter. Three other officers involved were fired but not yet charged. 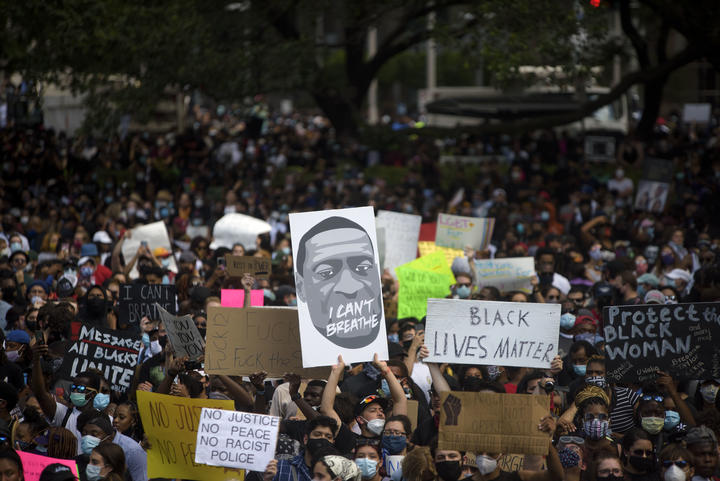 In Minneapolis, Roxie Washington, mother of Floyd's 6-year-old daughter, Gianna, told a news conference he was a good man. "I want everybody to know that this is what those officers took from me....," she said, sobbing. "Gianna does not have a father. He will never see her grow up, graduate."

The head of the US National Guard said on Tuesday 18,000 Guard members were assisting local law enforcement in 29 states.

Police in some cities faced gunfire, rocks and projectiles from hostile crowds. Demonstrators smashed windows and looted luxury stores on Fifth Avenue in New York, and set fire to a Los Angeles strip mall. Four police officers were shot in St. Louis and one in Las Vegas who was critically wounded, authorities said.

Some of those who have gathered at the site of Floyd's killing have invoked the non-violent message of the late US civil rights leader Martin Luther King Jr., assassinated in 1968, as the only way forward.

"He would be truly appalled by the violence because he gave his life for this stuff," said Al Clark, 62, a black man who drove to the Minneapolis memorial with one of King's speeches blaring from his truck.

"But I can understand the frustration and anger."

Police in other cities face charges

In Atlanta, six officers will face charges for an incident in which two college students were removed from their car and tased, Fulton County District Attorney Paul Howard told a briefing. Two of the six officers were terminated on Sunday.

A police officer in Sarasota, Florida, was placed on leave on Tuesday after video surfaced showing the officer kneeling on a man's back and neck during an arrest in May.

Officers were injured in clashes elsewhere, including one who was in critical condition after being hit by a car in the Bronx, police said.

Nearly an hour after curfew in Washington, D.C. the protesters at the Capitol joined those in Lafayette Park near the White House, where on Monday police used teargas and rubber bullets to clear the way for Trump to visit St. John's church nearby for a photo.

An author and social justice advocate, Dorsey spent 20 years in the Los Angeles Police Department, until 2000, and wrote Black and Blue: The Creation of a Social Advocate.

Dorsey said the killing of black people by police happens time and time again and is minimised by police departments.

"The death at the hands of an errant police officer at their hands, in most instances, is usually not the first offence. Usually, there's a pattern and practice of bad behaviour by police officers that went unchecked."

Dorsey said racism was so deeply embedded in some police departments that it was part of culture and institution.

"It comes from the top down. In many instances, there's been reports of police chiefs, sheriffs and other high ranking officials within police departments who have been quoted, who have been disciplined, and in some instances fired because of their own racial bias and inability to empathise and show compassion for the community that they took an oath to protect and serve.

She said US President Donald Trump is a big part of the problem and that he has used coded and incendiary language that encourage rough treatment of protesters.

"The fish rots from the head and, here, it's rotting from our White House."