The total number of global coronavirus cases has surpassed six million, as countries start to ease restrictions, some in spite of growing infections. 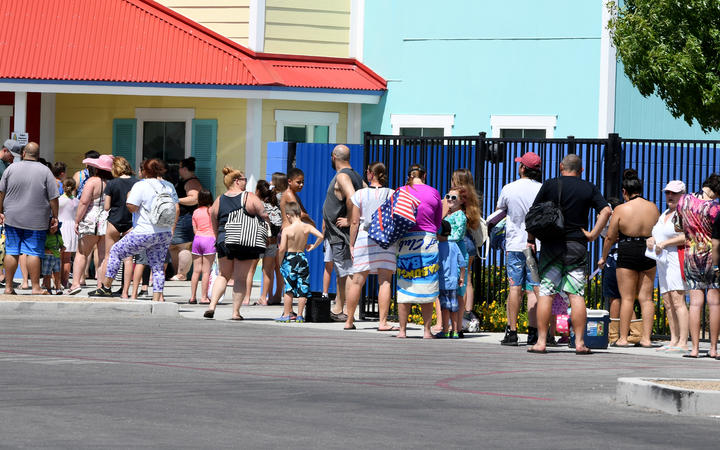 Guests line up to get into Cowabunga Bay Water Park, which was allowed to open for the first time this weekend because of the coronavirus pandemic Photo: AFP

Countries such as Brazil, Chile and Mexico are struggling to stem the spread of the virus, which initially peaked in China in February before large-scale outbreaks followed in Europe and the United States.

The Covid-19 respiratory illness has claimed more than 367,000 lives worldwide, according to a Reuters tally, though the true number is thought to be higher as testing is still limited and many countries do not include fatalities outside of hospitals.

The first 41 cases of coronavirus were confirmed in Wuhan, China, on 10 January and it took the world until 1 April to reach its first million cases. Since then, about one million new cases are reported every two weeks, according to a Reuters tally.

Despite the continued increase in cases, many countries are opening schools and workplaces following weeks of unprecedented lockdowns that have stemmed the spread of the disease - but also hammered economies and thrown millions out of work.

The following is a snap shot of the latest Covid-19 developments throughout the world.

Two days after the US recorded its first case of coronavirus, President Donald Trump said the situation was "totally under control" and assured the public it was "going to be just fine".

Fast forward four months and the virus has spread across all 50 states, leaving a death toll of 103,000 from more than 1.7 million confirmed cases - the highest number of deaths and cases in the world.

Trump announced yesterday he was terminating the US relationship with the World Health Organisation over its handling of the coronavirus, saying it had essentially become a puppet organisation of China.

India has announced plans to further ease a strict national lockdown even as the country reported a record daily rise in new coronavirus cases.

From 8 June, restaurants, hotels, shopping centres and places of worship will be allowed to re-open in many areas in the first stage of a three-phase plan.

But areas with high numbers of Covid-19 cases will remain under tight lockdown.

The plan comes after India registered a new record single-day rise in confirmed infections, with nearly 8000 cases reported on Saturday.

In total India has recorded some 174,500 cases and nearly 5000 deaths. The nation of 1.3 billion has been hit less hard by the coronavirus than many other countries.

Brazil reported a record 33,274 new cases of the novel coronavirus on Saturday, its health ministry said, and the death toll surpassed that of France and now ranks only below the United States, Britain and Italy.

The South American nation has now reported 498,440 confirmed cases of coronavirus since the outbreak began, a level of contagion second only to the United States. 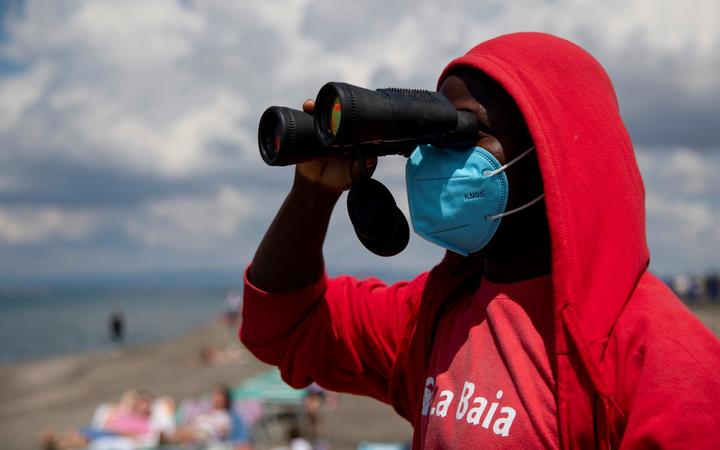 A lifeguard wearing a protective mask looks through his binoculars at a beach in Rome. Photo: AFP

Brazilian states are preparing to ease quarantine restrictions despite warnings from public health experts who say the worst is still to come.

England risks losing control of the coronavirus pandemic again and is at a "very dangerous moment" as it starts to ease out of the Covid-19 lockdown, senior scientific and medical advisers warn.

One of the slowest countries to lock down, Britain is now one of the worst-hit and is just starting to take tentative steps to reopen parts of the economy, aided by a newly launched track and trace system that is designed to suppress outbreaks.

From Monday, up to six people will be able to meet outside their homes in England, some school classes will restart and elite competitive sport can resume without fans.

But four members of Britain's Scientific Advisory Group for Emergencies (SAGE) called the lifting premature, adding that the track and trace system was untested and unlikely to cope with an infection rate of around 8000 new cases a day.

Deaths from the Covid-19 epidemic in Italy climbed by 111 on Saturday (local time), against 87 the day before, the Civil Protection Agency said, while the daily tally of new cases fell to 416 from 516 on Friday.

The total death toll stands at 33,340 the agency said, the third highest in the world after those of the United States and Britain.

The number of confirmed cases amounts to 232,664, the sixth highest global tally behind those of the United States, Russia, Spain, Britain and Brazil.

Parisians flocked to parks and gardens as they reopened in the sunny French capital on Saturday (local time) for the first time after almost 11 weeks of coronavirus lockdown, one of the last areas of France to ease restrictions.

With public impatience mounting and temperatures up to 28 Celsius forecast over the holiday weekend, authorities brought forward the parks' reopening, initially scheduled for 2 June.

Social distancing rules remain in force across Paris, one of Europe's most densely populated cities, and the recommended wearing of masks in parks may soon become compulsory as health officials remain watchful for any new increase in infections.