An alligator who survived World War Two in Berlin and was rumoured - wrongly - to have belonged to Nazi leader Adolf Hitler has died in Moscow Zoo. 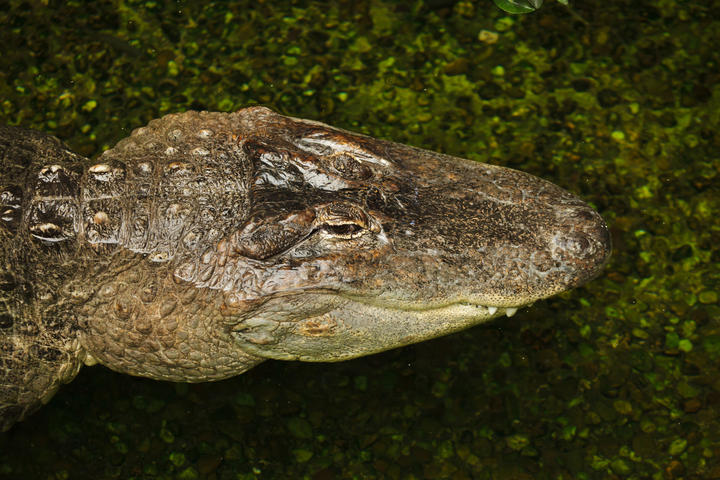 "Yesterday morning, our Mississippi alligator Saturn died of old age. He was about 84 years old - an extremely respectable age," the zoo said.

Saturn was gifted to Berlin Zoo in 1936 soon after he was born in the US. He escaped the zoo being bombed in 1943.

British soldiers found him three years later and gave him to the Soviet Union.

How he spent the intervening years always remained a mystery, but since July 1946 the alligator has been a hit with visitors in Moscow.

"Moscow Zoo has had the honour of keeping Saturn for 74 years," the zoo said in a statement.

"For us Saturn was an entire era, and that's without the slightest exaggeration... He saw many of us when we were children. We hope that we did not disappoint him."

The zoo reported that Saturn knew his keepers, loved being massaged with a brush - and was able to crack steel feeding tongs and bits of concrete with his teeth if irritated.

Mississippi alligators usually live to 30-50 years in the wild, it added.

Saturn may even have been the world's oldest alligator - it's impossible to say. Another male alligator, Muja who is at Belgrade Zoo in Serbia, is also in his 80s and still alive.

But it's doubtful any alligator could compete with Saturn if it came to selling their memoirs.

The most headline grabbing detail is the rumour that Saturn had belonged in Hitler's personal collection, which is untrue.

"Almost immediately after the arrival of the animal, the myth appeared that it was supposedly in Hitler's collection, and not in the Berlin zoo," Interfax news agency reports.

It is unclear how the rumour started.

Moscow Zoo dismissed such reports, noting that animals "do not belong to politics and mustn't be held responsible for human sins".

Saturn's death-defying escape in 1943 is unlikely ever to be explained.

Berlin, the capital of Nazi Germany, was subjected to intense Allied bombing before the war ended in 1945.

The so-called Battle of Berlin began in November 1943 and the night of 22-23 November saw extensive damage to areas west of the centre, including the Tiergarten district where the city's zoo is located.

Thousands of people were killed or injured and many of the zoo's animals perished too.

The zoo's aquarium building took a direct hit. One report said passers-by had seen the corpses of four crocodiles in the street outside, tossed there by the force of the blast.

Saturn somehow survived and then lived for three years in a city ravaged by war, and a climate unsuited to alligators.

It's reported he will now be stuffed and exhibited in Moscow's popular museum of biology named after Charles Darwin.