Jerry Stiller, who played two of American television's most cantankerous fathers on the sitcoms Seinfeld and The King of Queens, has died aged 92, his son Ben Stiller said. 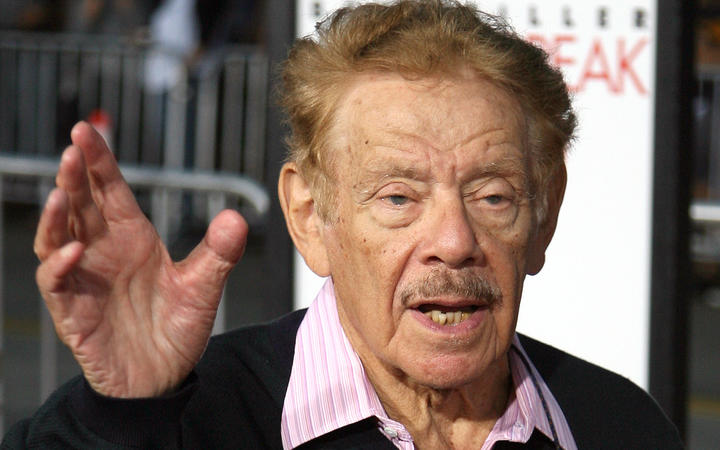 Jerry Stiller pictured in Los Angeles in 2007 arriving for the premiere of The Heartbreak Kid. Photo: AFP

"I'm sad to say that my father, Jerry Stiller, passed away from natural causes," wrote Ben, a Hollywood comedian who appeared with his father in Zoolander and other movies.

"He was a great dad and grandfather, and the most dedicated husband to Anne for about 62 years. He will be greatly missed. Love you Dad," he added.

Jerry Stiller was part of a 1960s comedy team with wife Anne Meara. But he was in his mid-60s when he got what would become his signature acting role - Frank Costanza, father of ne'er-do-well George Costanza (played by Jason Alexander) on Seinfeld, a tense, bombastic man always on the verge of apoplexy.

In 1993, Stiller had thought his entertainment career was nearing an end when he got a phone call from Larry David, co-creator of Seinfeld, about joining the cast led by comedian Jerry Seinfeld.

The show, one of the most highly regarded in US TV history, was in its fourth season at the time but Stiller said he had never watched a minute of it and had to ask, "Who's Seinfeld?"

He was performing in a play at the time and had to turn down the TV job. Stiller got another chance at the role a few months later and took it.

Stiller was in only 26 of the 172 Seinfeld episodes but each appearance was memorable, whether he was screaming "serenity now!" in a tense situation, trying on a bra for men or explaining the odd rituals of Festivus, the 23 December holiday he established as an alternative to Christmas.

Seinfeld ended its nine-year run in 1998 and that same year Stiller moved into another sitcom dad role on The King of Queens. As Arthur Spooner, he played another blowhard oddball - although not quite as eruptive as Frank Costanza - living in the basement of the home of his daughter (played by Leah Remini) and her husband (Kevin James) through the show's nine seasons. 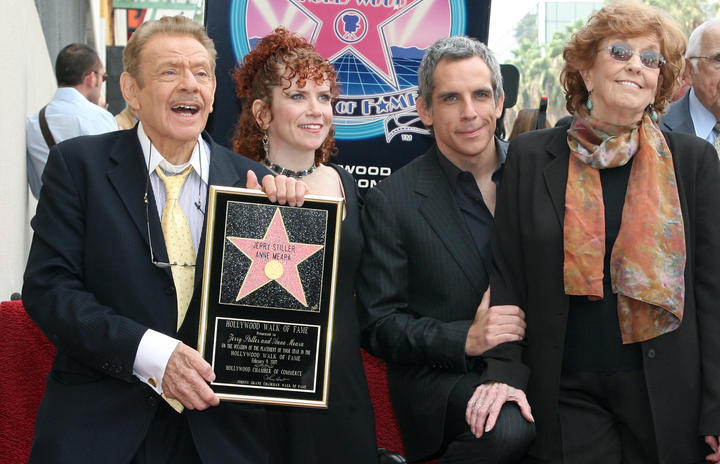 In this file photo taken in 2007, Jerry Stiller (left) and wife Anne Meara (right) pose with their children Amy and Ben, after being honoured with a Star on the Hollywood Walk of Fame. Photo: AFP

Stiller was born and grew up in New York, inspired by comedian Eddie Cantor and the vaudeville shows he saw with his father, a bus driver.

After serving in the US Army, Stiller studied drama at Syracuse University and then sought acting jobs. He was working with a woman comedy partner when he met Meara in 1953 at an agent's office. They married a few months later.

Stiller and Meara worked together in the Compass Players comedy troupe before forming their own team. By the 1960s, they had become a popular comedy duo on US television and appeared 36 times on The Ed Sullivan Show. Their act included skits such as an interview with the biblical Jonah after his encounter with the whale and parodies of TV commercials.

Much of their humour was marriage-based and focused on height (Stiller was 5-foot-4, Meara was considerably taller) and ethnicity (he was Jewish, she was of Irish heritage).

"Our marriage has lasted because we have the same feelings of insecurity about being an actor. We needed stability," Stiller told the New York Daily News in 2012.

In the early 1970s, Stiller and Meara began working separately. She made the movies The Out-of-Towners and Lovers and Other Strangers and had a one-year run starring on the television show Kate McShane. He did some Broadway work and appeared in films including Airport 1975 and The Taking of Pelham One Two Three.

Stiller also had roles in both the 1998 and 2007 versions of the movie Hairspray and appeared in films starring son Ben such as Zoolander and The Heartbreak Kid.

Stiller and Meara's daughter, Amy, also is an actress.