All of Germany's states have announced plans to make face masks compulsory to combat the spread of coronavirus. 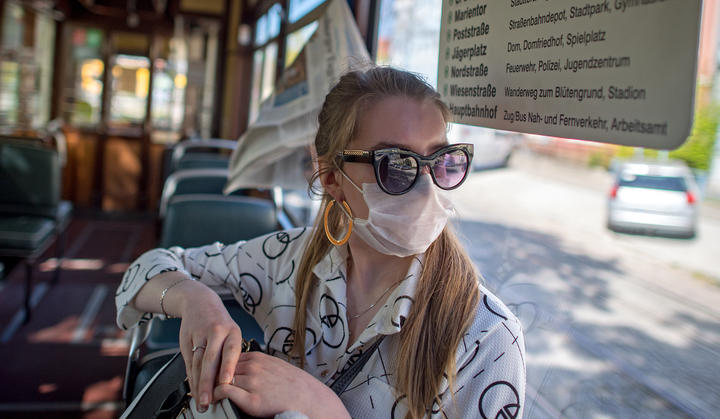 Even in the smallest tram operation in Germany, passengers will be required to wear masks from 23 April 2020. Photo: Hendrik Schmidt/dpa-Zentralbild/dpa / AFP

Bremen became the final federal region to back the measures, with its senate set to confirm the decision on Friday.

Mask use will be compulsory on public transport throughout Germany, and nearly all states will also make face coverings mandatory when shopping.

Different countries have issued different guidance on the use of face masks.

Austria made them compulsory when shopping at the start of this month, but on Wednesday Switzerland confirmed it would not make its citizens wear masks as it loosened its restrictions.

Wednesday's data showed a second consecutive day that new infections rose, with 281 deaths compared with 194 reported on Tuesday. Johns Hopkins University in the US puts the number of German deaths at 5117.

Germany's federal vaccines institute approved clinical trials for a possible vaccine involving humans on Wednesday. About 200 healthy volunteers aged between 18 and 55 will be tested with variants of the drug, developed by US pharmaceutical giant Pfizer and German company BioNTech.

Scientists at the University of Oxford are set to start trials on humans on Thursday, the UK government says. Separate trials are also taking place in the US city of Seattle.

What are the rules in Germany?

The new rules come into force in most states from Monday, once they pass in local legislatures. But where face masks will be required differs from state.

All 16 states will make facial coverings a necessity on public transport. But in Berlin, it will not be compulsory to wear a mask when shopping.

This is also the case in the northern state of Mecklenburg-Western Pomerania: that state has announced a fine of €25 ($NZ45) for anyone caught without one on public transport. Other states have yet to specify punishments.

Rhineland-Palatinate in the south-west says pupils will be given reusable masks as they slowly start to return to school at the beginning of May, while in Bavaria masks are mandatory for everyone aged seven and over from Monday.

Even the type of mask is not consistently specified. Prime Minister Winfried Kretschmann of Baden-Württemberg has said medical masks should be reserved for health workers, while scarves or cloth covers would be sufficient for people on the street.

Many state leaders had previously questioned the need to impose the measures on residents.

Thuringia's premier, Bodo Ramelow, said that as neighbouring states Bavaria and Saxony had announced measures, his eastern state had decided to follow suit. Mr Ramelow, however, also said mask usage could create a false sense of security for wearers.

Since the outbreak began, the World Health Organization (WHO) has consistently said only the ill and those caring for the ill need to wear masks.

Research suggests they are not as effective as frequent hand washing with soap and water, and can give users false confidence.

But a number of states in Europe are starting to make masks compulsory on public transport and in shops, including Austria, Czech Republic and Slovakia.

Others have begun handing out masks to commuters, such as Spain. France has promised to produce enough masks for all its residents should they wish to wear one.