A waiter or someone who handles food on the Ruby Princess was the likely source of a deadly outbreak of coronavirus in Australia, NSW Police have revealed. 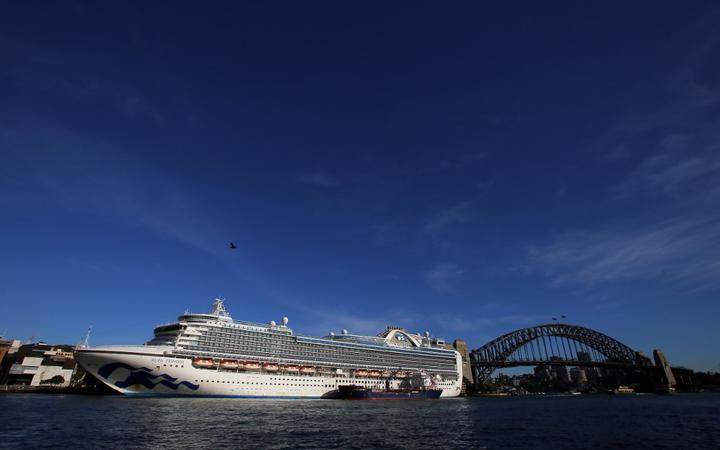 Detectives have begun interviewing thousands of witnesses about what they knew about potential Covid-19 cases on board the cruise ship before it docked in Sydney more than three weeks ago.

Since disembarking, 18 passengers from the ship have died and hundreds of confirmed cases have been linked to the vessel.

NSW Police announced a criminal investigation into the operator of the Ruby Princess, Carnival Australia earlier this month, while Shine Lawyers in Australia have mounted a class action against the company saying passengers were not advised of the risk and were not monitored for symptoms.

"That would seem to be the most obvious point of transmission - someone that is handling food on behalf of multiple hundreds of people," he said.

The Commissioner is expected to give a timeframe for the investigation tomorrow morning after meeting with Premier Gladys Berejiklian.

New Zealand is also exploring taking legal action regarding the Ruby Princess which visited five New Zealand ports in early March. In New Zealand, 16 cases in Hawke's Bay have been linked back to the ship which docked in Napier on 14 March.

"I would like to thank those 220 people who reached out through Crime Stoppers offering information … that could take two months alone chasing up those leads," Fuller said.

"If you are a passenger or crew member or you have any information that may assist with the police investigation, please call Crime Stoppers."

There are still more than 1000 passengers from over 50 different countries onboard the Ruby Princess, which docked in Port Kembla last week.

Medical teams boarded the ship on Thursday to test around 88 crew members who reported flu-like symptoms - 66 of them returned positive results.

The International Transport Workers Federation is calling for all 1000 remaining staff members to be tested, but Fuller said Carnival advised some of the crew wished to remain onboard.

"We have made offers through Carnival Cruises in terms of repatriation of certain groups and a number of them are actually happy to stay on," Fuller said.

"We appear to be getting get mixed messages on social media though.

"We are making every effort to get people home and we are working with Carnival to do that."

By Wednesday, the crew on board would have been in isolation for 10 days, but it's unclear what will happen to the ship in the near future.

"We are not going to run the ship out of port if there's multiple sick people who require a high degree of medical assistance - we won't do that," Fuller said.

"Some may need to come off because of safety reasons.

"The balance has been with all of these cruise ships is ensuring we look after people who need to be looked after, but at the same time not overwhelm our health system."

Six thousand Australians have returned from overseas and landed at Sydney International Airport over the past two weeks and 2700 are now in mandatory 14 days isolation in city hotels.