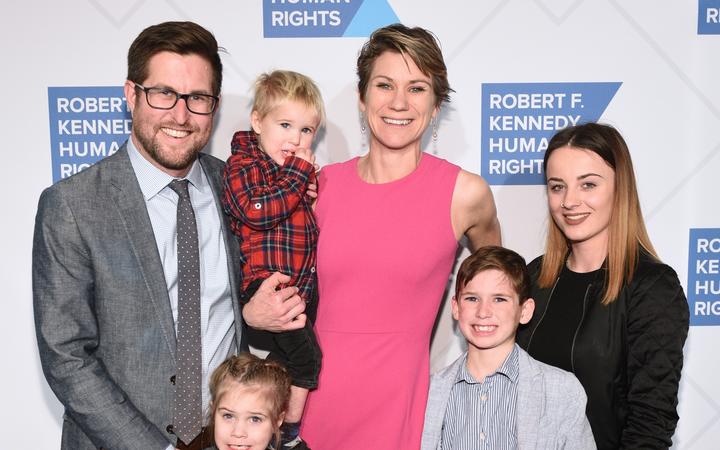 Maeve Kennedy McKean, pictured here with her husband and their children, was last seen with her son on Thursday. Photo: AFP / Getty Images

Maeve McKean and her son, eight-year-old Gideon, were last seen on Thursday evening in a canoe off Chesapeake Bay.

"They just got farther out than they could handle and couldn't get back in," said McKean's husband, David McKean, to the Washington Post newspaper.

The Coast Guard has reportedly covered 2275 square miles in its search.

The agency is joined by the Maryland Natural Resources Policy and the Anne Arundel County Fire Department in looking for the pair. Crews on boats and in helicopters have all been engaged in the search.

McKean is the daughter of Kathleen Kennedy Townsend, the former Maryland lieutenant governor. She works as a public health and human rights lawyer and is executive director of Georgetown University's Global Health Initiative.

"At this time our family asks for privacy and that everyone keep Maeve and Gideon in their prayers," the family said in a statement.

David McKean told the Washington Post that his family was staying at a waterfront home in Maryland owned by his wife's mother. While playing by the water at 4pm local time on Thursday, Maeve and Gideon "popped into a canoe" to chase after a ball that had rolled away, he said.

Two people - unnamed - were seen drifting several miles off shore 30 minutes later, according to a press release from a local fire department.

The wind in that part of the bay was around 30 miles per hour (50km/h) on Thursday night, with waves reaching three feet high, the Coast Guard said.

David McKean did not disclose whether or not the canoe had been found, but the Maryland Department of Natural Resources told US media that an overturned canoe matching the description of the McKean's boat had been found on Thursday evening.

The Kennedy family, an American political dynasty, has been beset by tragedy.

The assassination of President John F Kennedy was followed just five years later by the murder of his brother - and Maeve McKean's grandfather - Robert F Kennedy.