Here is a rundown of the numbers in some of the worst-hit countries since the outbreak began. 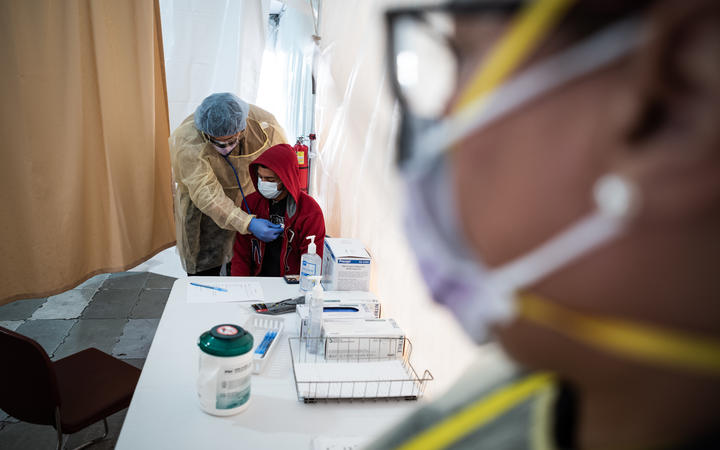 The death toll in Italy climbed by 756 to 10,779 the second successive fall in the daily rate.

The number of fatalities, by far the highest of any country in the world, account for more than a third of all deaths from the infectious virus worldwide.

Italy's largest daily toll was registered on Friday, when 919 people died. There were 889 deaths on Saturday.

Of those infected nationwide, 13,030 had fully recovered on Sunday, compared to 12,384 the day before.

Lombardy, the hardest hit Italian region, reported a rise in deaths of around 416 on Sunday.

Spain prepared to enter its third week under near-total lockdown on the weekend, as the government approved a strengthening of measures to curb the spread of the coronavirus and the death toll rose by 838 cases overnight to 6,528.

Schools, bars, restaurants and shops selling non-essential items have been shut since 14 March and most of the population is house-bound as Spain tries to curb the virus.

The US Centers for Disease Control and Prevention (CDC) issued a formal advisory on Saturday, asking residents of New York, New Jersey and Connecticut to "refrain from nonessential domestic travel for 14 days effective immediately".

There are at least 124,686 confirmed cases across the country, with 2,191 deaths. The United States overtook both China and Italy last week for number of reported cases.

On Sunday, top health official Dr Anthony Fauci estimated that 100,000 to 200,000 Americans would die due to the novel coronavirus, with "millions" of infections.

US President Donald Trump will hold a press conference at 10am NZT time with the latest information on Covid-19 in the US.

Sophie Grégoire Trudeau, the wife of Canadian Prime Minister Justin Trudeau, says she has received the "all clear" from her physician after testing positive for Covid-19 on 12 March.

The total number of confirmed cases of coronavirus in the UK now stands at 19,522. One week ago, the total stood at 5,683.

The jump in coronavirus-related deaths in the UK from 1019 to 1228 is an increase of 209 - the second biggest day-on-day rise in the number of deaths since the outbreak began.

It comes as Prime Minister Boris Johnson has written to all UK households saying the crisis will get worse before it gets better.

In the letter, being sent to 30 million homes, the prime minister warned stricter restrictions could be put in place if necessary.

A growing number of imported coronavirus cases in China risked fanning a second wave of infections when domestic transmissions had "basically been stopped", while eased travel curbs may also add to domestic risks.

China, where the disease first emerged in the central city of Wuhan, had an accumulated total of 693 cases entering from overseas, which meant "the possibility of a new round of infections remains relatively big", Mi Feng, spokesman for the National Health Commission (NHC), said.

A total of 3300 people have now died in mainland China, with a reported 81,439 infections.

In the last seven days, China has reported 313 imported cases of coronavirus but only six confirmed cases of domestic transmission, NHC's data showed.

There were 45 new coronavirus cases reported in the mainland on Saturday, down from 54 on the previous day, with all but one involving travellers from overseas.

Iran's coronavirus death toll has risen to 2640, as the Middle East's worst-hit country grapples with the fast-spreading outbreak.

"In the past 24 hours we had 123 deaths and 2901 people have been infected, bringing the total number of infected people to 38,309," Alireza Vahabzadeh, an adviser to the health minister, said in a tweet. "12,391 people infected from the virus have recovered."

Health ministry spokesman Kianush Jahanpur told state TV that 3,467 of those infected were in "critical condition".

"I am happy to announce that also 12,391 people who had been infected across the country have recovered," Jahanpur said. "The average age of those who have died of the disease is 69."

To stem the spread of the virus in crowded jails, Iran's judiciary on Sunday extended furloughs for 100,000 prisoners. On 17 March, Iran said it had freed about 85,000 people from jail temporarily, including political prisoners.

Syria's health ministry said that a woman who died after being rushed to hospital for emergency treatment was found to have been infected by coronavirus in the country's first officially-reported death from the disease.

Syria has so far confirmed only five cases, but medics and witnesses say there are more.

More than 662,700 people have been infected by the novel coronavirus across the world and 30,751 have died.