The US now has more confirmed cases of coronavirus than any other country with at least 82,404 positive tests. 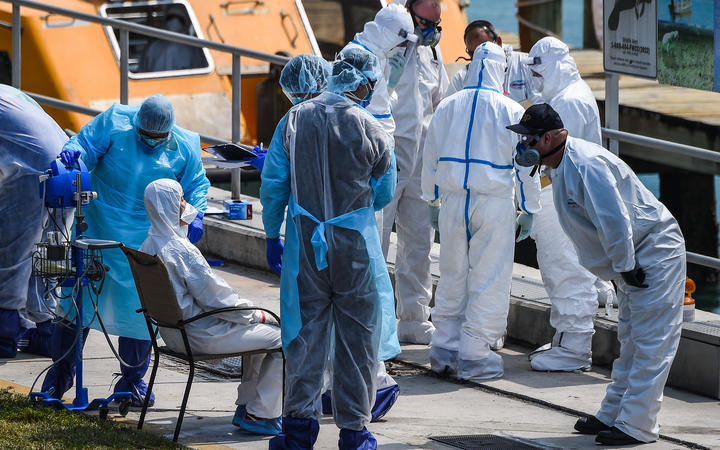 According to the latest figures collated by Johns Hopkins University, the US overtook China (81,782 cases) and Italy (80,589).

The grim milestone came as President Donald Trump predicted the nation would get back to work "pretty quickly", after 3.3 million layoffs.

At a White House briefing on Thursday afternoon, Trump said: "They have to go back to work, our country has to go back, our country is based on that and I think it's going to happen pretty quickly.

He added: "A lot of people misinterpret when I say go back, they're going to be practising as much as you can social distancing, and washing your hands and not shaking hands and all of the things we talked about."

As the US overtook China with the most coronavirus cases, Trump cast doubt on the figures coming out of Beijing, telling reporters "you don't know what the numbers are in China".

Trump said he would be speaking to President Xi Jinping by phone on Thursday night.

The US president denied that the Chinese leader had asked him to "calm down" the language he uses to refer to the pandemic.

New York, New Orleans and other hot spots were a surge in hospitalisations and looming shortages in supplies, staff and sick beds, Reuters reported.

Medical facilities were running low on ventilators and protective masks and were hampered by limited diagnostic testing capacity.

An expected shortfall of ventilators - machines that support respiration for people who have lost the ability to breathe on their own - was substantial, as a surge of cases overwhelms New York hospitals, New York Governor Andrew Cuomo told a news conference.

"Any scenario that is realistic will overwhelm the capacity of the healthcare system," he said. "The number of ventilators we need is so astronomical - it's not like they have them sitting in the warehouse," Cuomo added. "There is no stockpile available."

At least one New York hospital has begun a trial of sharing single ventilators between two patients.

Dr. Craig Smith, surgeon in chief at New York-Presbyterian/Columbia University Medical Center in Manhattan, wrote to staff that teams had worked "day and night" to get the split-ventilation experiment going.

While New York was the coronavirus epicenter in the United States this week, Louisiana could be the next. In New Orleans, the state's biggest city, Mardi Gras celebrations last month were believed to have fueled the outbreak.