India is to impose a nationwide lockdown in an attempt to slow the spread of the coronavirus, Prime Minister Narendra Modi has announced. 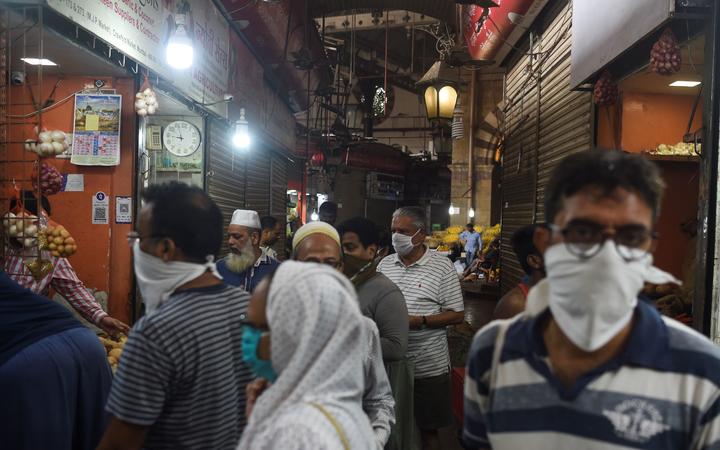 People shopping in market in Mumbai on 24 March 2020. Photo: AFP

The restrictions will apply from midnight local time and will be enforced for 21 days.

"There will be a total ban on venturing out of your homes," Modi said in a televised address.

India - which has a population of 1.3bn - joins a growing list of countries that have imposed similar measures.

The new measures follow a sharp increase in cases in recent days. There have been 519 confirmed cases in India and 10 reported deaths.

"The entire country will be in lockdown, total lockdown," Modi said on Tuesday.

He added: "To save India, to save its every citizen, you, your family... every street, every neighbourhood is being put under lockdown."

Modi warned that if India does not "handle these 21 days well, then our country... will go backwards by 21 years."

"This is a curfew," he said. "We will have to pay the economic cost of this but [it] is the responsibility of everyone."

He emphasised the seriousness of the situation and said that even developed countries had faced problems in combating it.

Modi said "social distancing was the only way to stop" the virus spreading, and called on people to follow instructions and not to spread rumours.

He announced that nearly $US2bn would be made available to boost the country's health infrastructure.

The prime minister's address came after several Indian states introduced measures of their own, such as travel restrictions and the closure of non-essential services.

India has already issued a ban on international arrivals and grounded domestic flights. The country's rail network has also suspended most passenger services.

Many parts of India, including cities such as Delhi and Mumbai, are already under tight restrictions. But this move extends those provisions to every corner of the country.

An earlier one-day curfew, which was seen as a trial, was flouted by many.

Mr Modi called on Indians to clap and cheer the emergency services from their balconies on Sunday. But many misunderstood the call and congregated in the streets as they danced and chanted.

"It's impossible to fathom the cost that India may have to pay if such irresponsible behaviour continues," Mr Modi warned at the time. "Social distancing is the only option to combat coronavirus."

The implications of a total lockdown in India are huge, not just economically, but socially.

This is a nation where community is everything. Going to worship at a temple, mosque or church is an essential part of daily life for so many.

This is a seismic cultural shift but - like the rest of the world facing similar restrictions - a necessary one.

What's the latest from around Asia?

Neighbouring Pakistan has almost twice as many confirmed cases - 878 as of Monday evening. Sweeping restrictions are in place although the government has stopped short of imposing a nationwide lockdown. However, several provinces have announced them independently. The army is being brought in to help enforce the restrictions.

Bangladesh, which has reported 33 cases and three deaths, is also deploying its armed forces to help maintain social distancing and boost Covid-19 preventive measures. The soldiers will also monitor thousands of quarantined expatriate returnees. Across South Asia, there are concerns that the actual number of cases could be much higher than is being reported.

Indonesia, which has 49 confirmed Covid-19 deaths - the highest in South-East Asia - has converted an athlete's village built for the 2018 Asian Games into a makeshift hospital for coronavirus patients. A state of emergency was declared in Jakarta on Monday.

Thailand, a month-long state of emergency which will include curfews and checkpoints will begin on Thursday. The government has been criticised for failing to take strong action so far. Four people have died and nearly 900 tested positive.

The most populous country that was without a case until now - Myanmar - has announced two cases.