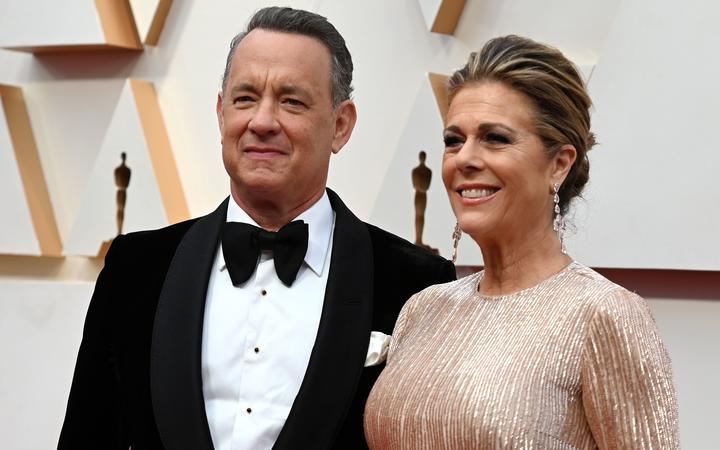 The couple is in hospital on the Gold Coast.

Hanks, who is working on his latest film on the Gold Coast, tweeted that they both felt tired, aching and had slight fevers.

He said they were then tested and found to be positive for the respiratory illness.

The 63-year-old actor said they will now be isolated for as long as public health and safety requires.

Hanks was in the Queensland city to work on an Elvis biopic with director Baz Luhrmann.

"Well, now. What to do next?" Hanks wrote today.

"The medical officials have protocols that must be followed.

"We Hanks' will be tested, observed, and isolated for as long as public health and safety requires.

"Not much more to it than a one-day-at-a-time approach, no?

"Take care of yourselves!" his social media post said.

Warner Bros. Pictures, which is distributing the Elvis film, also released a statement.

"We have been made aware that a company member from our Elvis feature film, which is currently in pre-production on the Gold Coast, Australia, has tested positive for COVID-19 (coronavirus)," a spokesperson said.

"We are working closely with the appropriate Australian health agencies to identify and contact anyone who may have come in direct contact with the individual.

"The health and safety of our company members is always our top priority, and we are taking precautions to protect everyone who works on our productions around the world.

"The individual who tested positive for COVID-19 is currently receiving treatment."

Last Thursday Wilson performed on stage to an audience at the Emporium Hotel in Brisbane's South Bank.

Hanks was among those watching on, as was commercial radio presenter Robin Bailey.

Hollywood reacted to the news with Canadian-born actor Donal Logue, known for roles in Vikings and Gotham, tweeting, "Feel better, boss! All the best to you and Rita".

Brian Koppelman, the creator and showrunner for the TV show Billions, wrote, "Get better, sir! We need you".

Most reactions were jokes and memes including one Twitter post that said, "he'll be fine… the dude survived being stranded on an island, Vietnam, and a failed moon landing," referring to Hanks' past roles.

Queensland currently has 20 other confirmed cases of coronavirus and almost 3000 people in self-isolation at home.

Health officials are also trying to track down patrons of Friday's nightclub in Brisbane after a university student who contracted the disease attended the night spot last weekend.

Coronavirus was officially declared a pandemic by the World Health Organisation today, after the number of cases outside China increased 13-fold in the past two weeks.

The announcement came as new figures from Italy showed the death rate among coronavirus patients in that country was more than 6 percent, higher than the global average of about 3.6 percent.

The coronavirus, which emerged in China in December, has spread around the world, halting industry, bringing flights to a standstill, closing schools and forcing the postponement of sporting events and concerts.