Hundreds of billions of locusts are swarming through parts of East Africa and South Asia in the worst infestation for a quarter of a century, threatening crops and livelihoods. 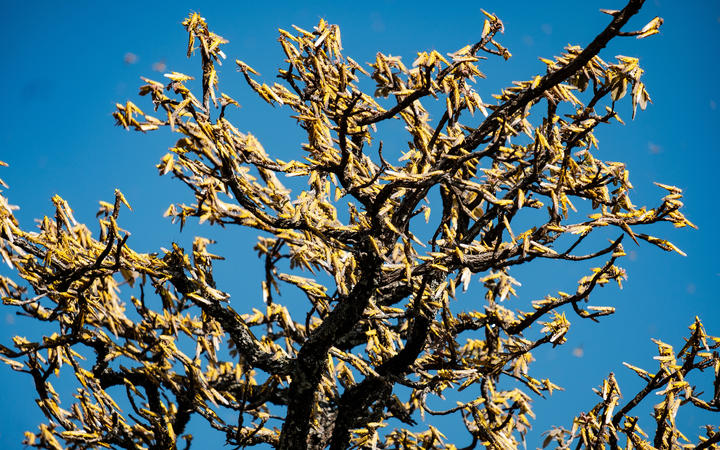 Swarms of locusts land and feed on shea trees - which are a big source of food and income for local farmers - in Uganda. Photo: AFP

The insects, which eat their own body weight in food every day, are breeding so fast numbers could grow four hundredfold by June.

In January, the UN appealed for $US76 million ($NZ120m) to tackle the crisis.

That figure has now risen to $US138m.

But so far, only $US52m has been received, $US10m of which has come this week from the Bill & Melinda Gates Foundation.

The main threats are in East Africa and Yemen, as well the Gulf states, Iran, Pakistan and India.

Most recently, locusts have been seen in the Democratic Republic of Congo and swarms have arrived in Kuwait, Bahrain and Qatar and along the coast of Iran.

Aerial and ground spraying combined with constant tracking of the swarms are viewed as the most effective strategies.

Currently, Ethiopia was using five and Kenya six for spraying and four for surveying, he said.

But the Kenyan government says it needs 20 planes for spraying - and a continuous supply of the pesticide Fenitrothion.

Kenya has trained more than 240 personnel from affected counties in monitoring of locust swarms.

The Chinese government announced in February it was sending a team of experts to neighbouring Pakistan to develop "targeted programmes" against the locusts.

According to reports, they could deploy 100,000 ducks.

Lu Lizhi, a senior researcher with the Zhejiang Academy of Agricultural Sciences, told Bloomberg the ducks were "biological weapons".

And while chickens could eat about 70 locusts in one day, a duck could devour more than three times that number.

"Ducks like to stay in a group, so they are easier to manage than chickens," he told Chinese media.