Fighting has resumed in Afghanistan after the Taliban ended a partial truce with government troops, casting doubt on peace talks scheduled for next week. 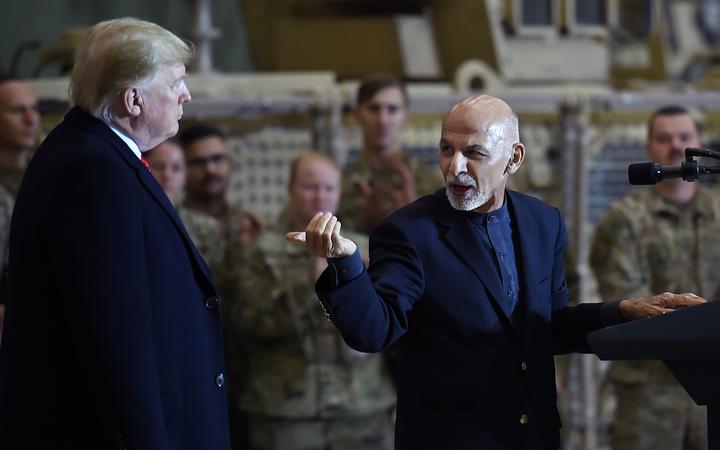 Meanwhile US President Donald Trump said he had a "very good talk" with a Taliban leader.

Their phone call follows the peace deal signed between the US and the Taliban at the weekend.

A Taliban spokesman said the call between the US president and Mullah Abdul Ghani Baradar lasted more than half an hour, and both expressed a desire to bring peace to Afghanistan.

#Breaking
The President of the United States Trump @realDonaldTrump held a phone conversation with the Political Deputy of the Islamic Emirate, the respected Mullah Baradar Akhund. Details later. pic.twitter.com/p1iJpempNz

The Taliban said that Trump would ask his Secretary of State Mike Pompeo to talk with Afghan President Ashraf Ghani in order to make sure negotiations between the Afghan government and the Taliban went ahead as planned as part of the peace deal.

A dispute over a prisoner swap has raised questions over the agreement - to which the Afghan government is not a direct party.

Under the accord, some 5000 Taliban prisoners and 1000 Afghan security force prisoners were to be exchanged by 10 March, when talks between the Taliban and the Afghan government are due to start.

But Afghanistan's President Ashraf Ghani said on Sunday his government had agreed to no such release. And on Monday the militants said talks would not take place if their prisoners were not released first.

The Afghan government said more than 20 people had died in the 24 hours since the Taliban resumed attacks on local targets.

In Logar province near Kabul, an attack killed five policemen at a checkpoint outside a copper mine, the provincial governor's spokesman said.

In Herat in the west, one Afghan National Army soldier was killed in a Taliban attack, the Defence Ministry told the BBC.

What have the Taliban said?

The Taliban say they will meet Afghan officials but only to discuss the prisoner release.

"Now it is in the agreement and it is up to the US how it fulfils the commitments they made in the agreement," the Taliban's Doha office spokesman, Suhail Shaheen, tweeted.

Although the US-Taliban deal provides for the prisoner swap, a separate US-Afghan declaration commits the government in Kabul only to participating in talks on the "feasibility" of such a release, Reuters news agency reported.

An estimated 10,000 captured Taliban are being held in Afghanistan. The hardline Islamist group had observed a "reduction in violence" in the week leading up to the agreement with the US being signed on Saturday in Qatar.

They have said they will resume fighting Afghan forces, but would not target international troops.

The Taliban have previously refused to negotiate with the Afghan government, so Saturday's deal was just with the US, which invaded Afghanistan weeks after the September 2001 attacks in New York by al-Qaeda, then based in Afghanistan.

The Taliban were ousted from power but became an insurgent force that by 2018 was active in more than two-thirds of the country.

How has the US reacted?

General Scott Miller, the US forces commander in Afghanistan, said the reduction in violence "was a confidence builder", adding: "We're very serious about our obligations and we expect the Taliban will be serious about their obligations.

"The United States has been very clear about our expectations - the violence must remain low."

Saturday's agreement included the withdrawal of US troops and its Nato allies from Afghanistan within 14 months - if the militants stick to the deal.

About 12,000 US troops are still stationed in the country.

President Trump, who had promised to end the Afghan conflict, said on Saturday that it was "time to bring our people back home".

Trump said 5000 US troops would leave Afghanistan by May.

He added that US troops had been killing militants in Afghanistan "by the thousands" and now it was "time for someone else to do that work and it will be the Taliban and it could be surrounding countries".