A gunman has killed five employees at the Molson Coors brewery complex in Milwaukee, Wisconsin, before apparently shooting himself dead, the city's police chief says. 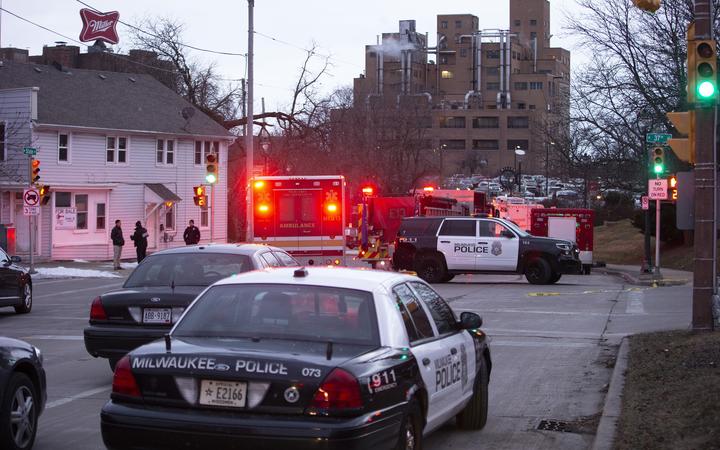 Emergency personnel at the scene of a shooting at the Molson Coors Brewing Co. campus on 26 February 2020 in Milwaukee, Wisconsin. Photo: Nuccio DiNuzzo / Getty Images / AFP

No other people were injured in the shooting which began about 2pm local time at the sprawling campus of more than 20 buildings, where more than 1000 workers are employed by the beer company, police chief Alfonso Morales told reporters at a news conference hours after the shooting.

"There is no threat at this time, and we will continue to investigate throughout the night," he said.

Morales said the bloodshed was confined to the Molson Coors complex west of downtown - a facility known to locals as the old Miller brewery - and that "no members of the general public were involved". Miller beer is one of the company's leading brands.

Hours later, law enforcement officers were still combing through each building in the complex to secure the facility, Morales said, adding the deceased gunman was believed to have acted alone.

The suspect was described only as a 51-year-old Milwaukee man. Details about the circumstances of the shooting, including what may have precipitated the carnage, were not provided by authorities.

US President Donald Trump, acknowledging the shooting as he opened a White House news conference about the coronavirus outbreak, referred to the gunman as a "wicked murderer" and called the gun violence "a terrible thing."

Appearing with the police chief in Milwaukee, mayor Tom Barrett branded the shooting "an unspeakable tragedy."

"There were five individuals who went to work today just like everybody goes to work. They thought they were going to work and return to their families. They didn't, and tragically they never will."

Governor Tony Evers asked for a brief moment of silence out of respect for the victims "needlessly murdered at Molson Coors this afternoon."

The entire Molson Coors campus was placed under a security lockdown, and the company advised employees in an email that the gunman had been located in or near a second-floor stairwell near a packaging facility, the Milwaukee Journal Sentinel reported.

Video footage from the scene showed streets cordoned off with numerous police and fire department vehicles ringing the area as brewery workers were escorted from buildings.

Local television station WISN, an ABC affiliate, said police appeared to be searching a vehicle at or near the scene. The station later showed part of a residential Milwaukee neighborhood roped off with police tape.

According to the Journal Sentinel, Molson Coors Beverage Co, which operates MillerCoors, announced plans last fall to close a Denver office and relocate some corporate support jobs to Milwaukee. The newspaper said the restructuring was designed to cut costs and resulted in 400 to 500 jobs being eliminated throughout Molson Coors.

It said the company now had 610 jobs at its Milwaukee corporate office, in addition to 750 jobs at two breweries in the city.