By Gabriel Gatehouse for BBC Newsnight

Up to one fifth of the Amazon rainforest is emitting more CO2 than it absorbs, new research suggests. 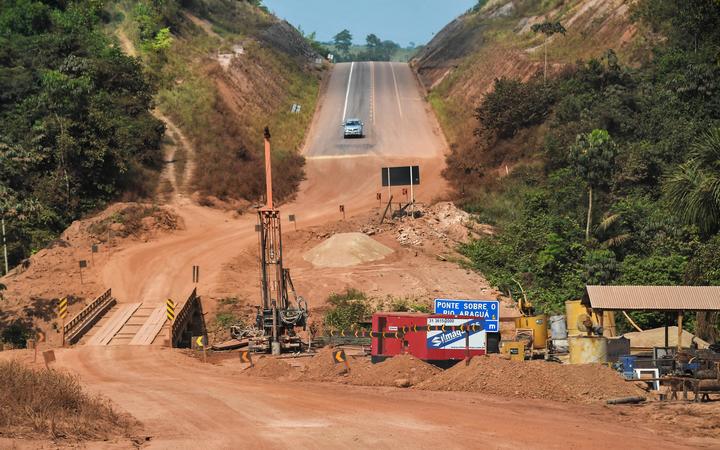 Results from a decade-long study of greenhouse gases over the Amazon basin appear to show about 20 percent of the total area has become a net source of carbon dioxide in the atmosphere.

One of the main causes is deforestation.

While trees are growing they absorb carbon dioxide from the atmosphere; dead trees release it again.

Millions of trees have been lost to logging and fires in recent years.

The results of the study, which have not yet been published, have implications for the effort to combat climate change.

They suggest that the Amazon rainforest - a vital carbon store, or "sink", that slows the pace of global warming - may be turning into a carbon source faster than previously thought.

Every two weeks for the past 10 years, a team of scientists led by Prof Luciana Gatti, a researcher at Brazil's National Institute for Space Research (INPE), has been measuring greenhouse gases by flying aircraft fitted with sensors over different parts of the Amazon basin.

What the group found was startling: while most of the rainforest still retains its ability to absorb large quantities of carbon dioxide - especially in wetter years - one portion of the forest which is especially heavily deforested appears to have lost that capacity.

Gatti's research suggests this south-eastern part of the forest, about 20 percent of the total area, has become a carbon source.

"Each year is worse," she told BBC.

"We observed that this area in the south-east is an important source of carbon. And it doesn't matter whether it is a wet year or a dry year. 2017-18 was a wet year, but it didn't make any difference."

A forest can become a source of carbon rather than a store, or sink, when trees die and emit carbon into the atmosphere.

Areas of deforestation also contribute to the Amazon's inability to absorb carbon.

Carlos Nobre, who co-authored Prof Gatti's study, called the observation "very worrying" because "it could be showing the beginnings of a major tipping point".

He believes the new findings suggest that in the next 30 years, more than half the Amazon could transform from rainforest into savanna.

For decades, scientists have warned of an "Amazon tipping-point" at which the forest loses its ability to renew itself and begins to emit more carbon than it absorbs.

"[The Amazon] used to be, in the 1980s and 90s, a very strong carbon sink, perhaps extracting two billion tonnes of carbon dioxide a year from the atmosphere," says Prof Nobre, who is also a researcher at the University of Sao Paulo's Institute for Advanced Studies and Brazil's leading expert on the Amazon.

"Today, that strength is reduced perhaps to 1-1.2bn tonnes of carbon dioxide a year."

To put that in context, a billion tonnes of carbon dioxide is almost three times what the UK said it officially emitted in 2018. That figure does not take into account the amount of carbon dioxide released through deforestation and forest fires.

After almost a decade of decreases, deforestation in the Amazon has increased significantly in recent years - 2019 was a particularly bad year.

Between July and September last year, destruction was above 1000 square kilometres per month.

"In our calculations, if we exceed that 20-25% of deforestation, and global warming continues unabated with high emission scenarios, then the tipping point would be reached," says Prof Nobre, one of the first proponents of the tipping point theory.

Opinions on when the tipping point could occur differed among scientists.

"Some people think that it won't be until three-degrees warming - so towards the end of the century, whereas other people think that we could get [it with] deforestation up above 20% or so and that might happen in the next decade or two. So it's really, really uncertain," explained Simon Lewis, professor of global change science at UCL.

"It says to me that perhaps this is more near-term than perhaps I was initially thinking."

Prof Nobre's theory was based on climate models. The new study is based on real-life observations, which produce more accurate results.

Prof Gatti told the BBC she wanted to see a moratorium on deforestation in the Amazon to establish whether the trend could be reversed, but that looks unlikely.

Brazil's president has made his priority for the rainforest very clear: development over conservation.

Saving the Amazon is, for now, a question of political choice. But the science suggests that choice may not be on offer for very much longer.