Sinn Féin wants a major role in Ireland's next government after a record election showing, a move that would raise its central goal of Irish reunification to the top of the agenda in Dublin. 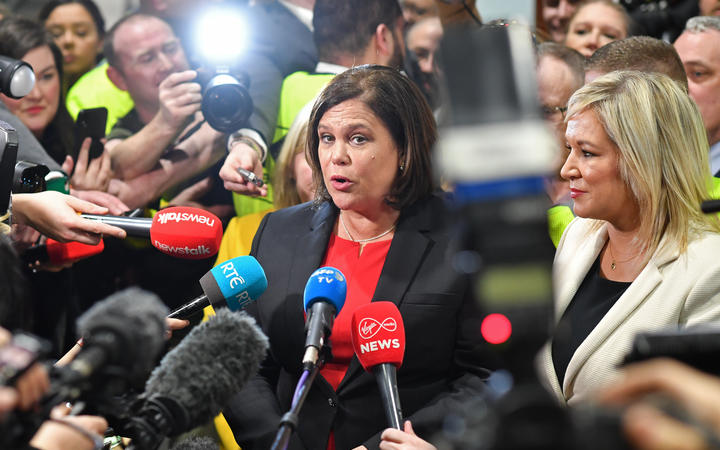 The left-wing party stunned the establishment by beating the two centre-right parties that have led every government in the country's history, almost doubling its vote share from the last election to 24.5 percent to become Ireland's top political party.

Sinn Féin's low number of candidates meant, however, that it fell just short of the largest number of seats on 37, behind the centre-right Fianna Fail on 38 but for the first time above Prime Minister Leo Varadkar's Fine Gael, which fell to 35 seats.

The task of forming a government will be extremely complicated in a hugely fractured 160-seat parliament.

Successive surveys suggested the Sinn Féin surge was based on the major campaign issues of healthcare and the high cost and low availability of housing, with the idea of Irish unity not to the forefront of voters' mind.

However, the former political wing of the Irish Republican Army (IRA) said ahead of the vote that a condition for any coalition would be immediate preparations for a referendum on unity with Northern Ireland, a British province, that it would push London to hold within five years.

"People want new politics and I believe Sinn Féin will be the core of that," Sinn Féin leader Mary Lou McDonald told reporters.

Both Fine Gael, which secured 20.9 percent of the vote, and Fianna Fail, with 22.2 percent, have insisted for years they would not govern with Sinn Féin, citing differing economic policies and its past links to the IRA. The militant group fought against British rule in Northern Ireland in a conflict in which some 3600 people were killed before a 1998 peace deal.

Fine Gael repeated its insistence today, while Fianna Fail said it saw significant hurdles to such a tie-up. Fine Gael and Fianna Fail have never formed a coalition together, as the parties themselves were formed from opposite ends of an old IRA split in the country's bitter civil war in 1922.

Varadkar had presided over a minority government.

"We certainly will engage with them (Sinn Féin)," Fianna Fail deputy leader Dara Calleary told national broadcaster RTE. "But let's be in no doubt that those policy difficulties and those principles are still difficult hurdles."

A combination of two of the three parties would also require the support of other lawmakers or smaller parties.

McDonald said she would first try to establish whether she could form a left-wing coalition without Fianna Fail or Fine Gael, an option analysts said was unrealistic. Senior colleague Eoin O Broin, also cast doubt on that, saying there would ultimately be negotiations between the three big parties.

Talks to form the last government in 2016 lasted 10 weeks. 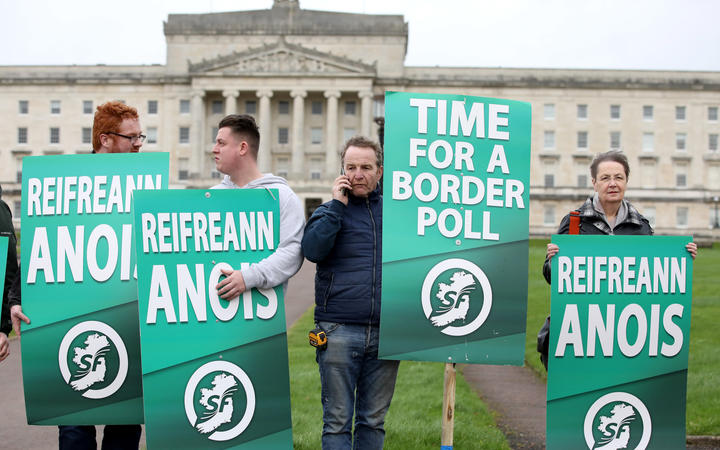 Sinn Fein activists protest at the Parliament Buildings on the Stormont Estate in Belfast against Brexit and call for a border poll on Irish Unity. Photo: AFP

The island of Ireland was partitioned in 1921 after a peace treaty between Britain and the IRA established a southern 26-county 'free state', which later became a fully-fledged Republic.

The treaty also established Northern Ireland, a six-county British statelet with a build-in Protestant British majority population and a sizeable Irish Catholic minority who would be subject to discrimination, systemic inequality and political disenfranchisement over several decades.

Under the 1998 Good Friday deal, which mostly ended violence between Irish Republicans seeking to reunite the six counties with the southern Irish Republic and Protestant unionists who want it to remain part of Britain, Britain's minister for the region can call a referendum if a "yes" majority looks likely.

A vote would also be required in the Irish Republic and an exit poll yesterday showed 57 percent of voters backed holding one within five years. Eighty-one percent of Sinn Féin supporters want a poll, compared to 52 percent of Fianna Fail voters and 44 percent among Fine Gael.

In its election manifesto, Sinn Féin said it wanted to establish a parliamentary committee and citizens assembly to plan for Irish unity.

McDonald believes Britain would only consider calling a poll when the Irish Republic is pro-actively planning for reunification.

Fianna Fail and Fine Gael have always paid lip service to the idea of reunification, but say now is not the time. Fianna Fail pledged in its manifesto to start some preparations, but nowhere near the level Sinn Féin wants.

"One quarter of the vote is hardly a stunning endorsement of the idea that there should be a border poll," Jeffrey Donaldson, a senior member of the pro-British Democratic Unionist Party, which shares power with Sinn Féin in Northern Ireland, told the BBC.