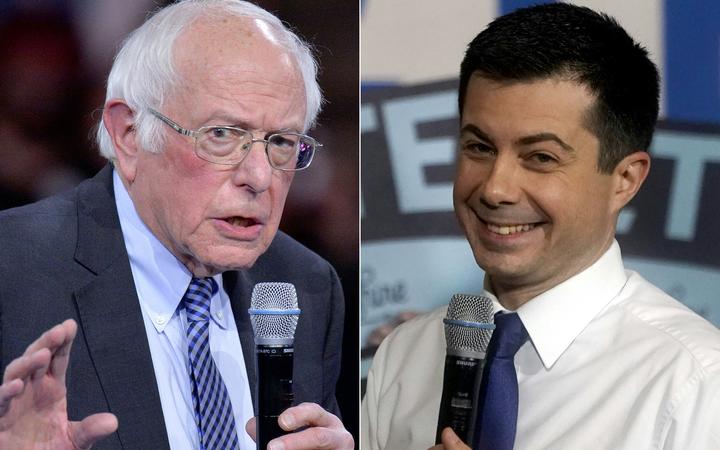 The rivals, who were essentially tied for the top two spots in last week's Iowa caucuses, offer stark alternatives for the top of the Democratic ticket. Sanders, 78, is a US senator and impassioned progressive who has spent almost three decades in Congress, while Buttigieg, 38, is a moderate military veteran who served two terms as mayor of South Bend, Indiana.

The Iowa Democratic Party on Sunday released updated results showing that Buttigieg won 14 delegates and Sanders 12. While the numbers are low in terms of the total a candidate would need to secure the nomination, a win provides critical early momentum.

Tuesday's New Hampshire primary, the second in a state-by-state nominating contest, also will test the staying power of US Senator Elizabeth Warren, who finished third in Iowa, and former Vice President Joe Biden, who placed fourth. They joined the field of 11 Democratic candidates campaigning in packed school gymnasiums and hotel ballrooms six days after the Iowa caucuses drew lower-than-expected numbers of voters.

Here is what is happening on the campaign trail on Sunday:

Buttigieg told a crowd of 1800 in Nashua that Democrats needed a unifying voice to take on Trump.

"The idea that we've either got to wait for a revolution or wait for the status quo leaves most of us out," Buttigieg said in a thinly veiled reference to Sanders and Biden. "We need a politics that brings all of us in."

Buttigieg, who would be the nation's first openly gay president, deflected attacks from his more well-known rivals as they jostled to dampen the momentum of a candidate who has surged in New Hampshire opinion polls over the past few days.

The senator from Vermont touted his own small-dollar fundraising, saying: "Because we bring forth an agenda that doesn't ask for approval from Wall Street, or the drug companies, our agenda is the agenda that represents working families."

Buttigieg, who likes to note that he is the least wealthy of the Democratic candidates, countered that he had never hesitated to stand up to industry.

"Bernie's pretty rich, and I would happily accept a contribution from him," Buttigieg said on CNN.

Brian Sterner, 59, who works in the chemical industry, said he was leaning toward Buttigieg but had concerns whether a small-city former mayor could beat Trump.

"I like his moderate political views and the fact that he's trying to bring people together," Sterner said while standing in line at Buttigieg's Nashua rally. "I am concerned about his lack of experience. I do think that makes him vulnerable."

Biden, speaking in Hampton, seemed ready to move on to other states that may be more favourable to him.

"No matter what happens in this state ... I'm going to keep moving," Biden said in response to a question about his poor showing in Iowa.

Biden, who had fewer events scheduled on Sunday than his rivals, conceded he was out-organized by Sanders and Buttigieg in Iowa. He reiterated his long-standing belief that he would perform better in states with more African Americans and other voters of colour, including upcoming contests in Nevada and South Carolina.

Democrats have complained about the outsize impact of Iowa and New Hampshire - rural states that do not represent the diversity of the party or country.

One young woman asked Biden why he performed so poorly in Iowa. He asked her if she had ever caucused and when she said she had, responded: "No, you haven't. You're a lying dog-faced pony soldier. ... Now you gotta be honest. I'm going to be honest with you."

The crowd laughed, but a video of the exchange began circulating on Twitter. Biden has used the line before, and attributes it to a John Wayne movie, "Hondo."

US Senator Amy Klobuchar told hundreds of supporters in Nashua that her campaign had raised $3 million since the latest Democratic candidates' debate ended on Friday night.

"We are surging because of you guys," Klobuchar said. "Boy, did I have fun on that debate stage."

As she had in the debate, she praised the courage of fellow Senators Doug Jones, a Democrat facing re-election in conservative Alabama, and Republican Mitt Romney, for voting in favour of convicting Trump in his impeachment trial. The crowd cheered Jones, but roared when she mentioned Romney, the 2012 Republican nominee.

"You know things are upside down in our politics when at a Democratic rally, Mitt Romney gets the biggest cheer," Klobuchar said.

'A plan for that'

Warren posed for selfies and asked diners to tell her their number one concern at Blake's, a Manchester restaurant.

Her numerous policy proposals have led to the campaign slogan: "Warren has a plan for that." When one man mentioned the cost of prescription drugs, she explained her intention to use executive power to drop the prices of commonly used medications. Another man got a quick summary of her plan to raise Social Security and Medicaid payments by $200 a month.

"So you know about my plan to cancel student loan debt?" Warren asked, saying she would erase debt for 43m Americans.

Straw said later she planned to vote for Sanders, who has proposed cancelling all student loan debt.

"I really like Warren," said Straw, an occupational therapist. "However, Bernie's going to offer me a lot more."

At a campaign stop in Concord, Warren told reporters that she did not intend to go negative on fellow front-runners.