Prominent Republican senator Mitt Romney is breaking with his party and will vote to convict Donald Trump in his impeachment trial as the US Senate is poised to acquit the Republican president. 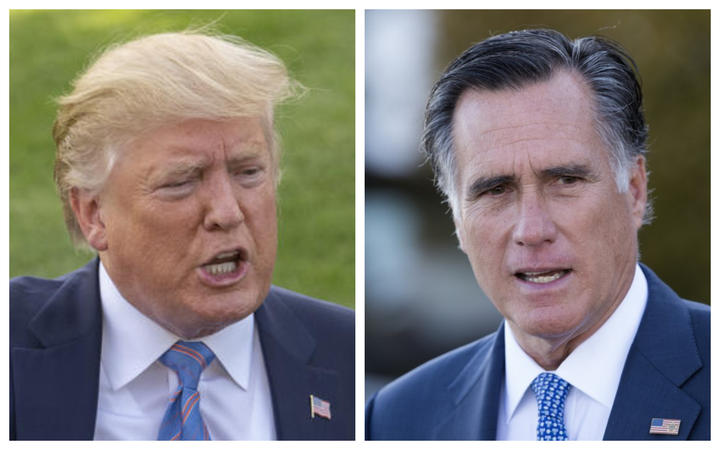 Senator Mitt Romney, right, expects to attract criticism from US President Donald Trump and other Republicans after deciding to vote to convict Trump in his impeachment trial. Photo: AFP

The Republican-controlled Senate is scheduled to vote today on whether to convict Trump on charges of abuse of power and obstruction of Congress arising from his dealings with Ukraine in only the third presidential impeachment trial in United States history. The Democratic-led House of Representatives approved the charges on 18 December.

Romney, the 2012 Republican presidential nominee who has previously criticised Trump on other matters, called the president's actions in pressuring Ukraine to investigate political rival Joe Biden "grievously wrong" and said Trump was "guilty of an appalling abuse of public trust".

"What he did was not 'perfect,'" Romney said on the Senate floor, as Trump has described his call with Ukraine's president that was at the heart of the scandal. "No, it was a flagrant assault on our electoral rights, our national security and our fundamental values. Corrupting an election to keep one's self in office is perhaps the most abusive and destructive violation of one's oath of office that I can imagine."

Romney, a moderate and elder statesman in his party, is the only Republican senator to announce that he plans to vote to remove Trump from office.

He expected to face the wrath of the president and perhaps Republicans in his own state, the senator said, but his "inescapable conviction [was] that my oath before God demanded of me" a vote to convict.

"My vote will likely be in the minority in the Senate," Romney added. "But... with my vote, I will tell my children and their children that I did my duty to the best of my ability, believing that my country expected it of me."

Minutes after Romney's speech concluded, he was rebuked by Ronna McDaniel, his niece and chairwoman of the Republican national party.

"The bottom line is President Trump did nothing wrong, and the Republican Party is more united than ever behind him," McDaniel tweeted.

Mitt Romney is forever bitter that he will never be POTUS. He was too weak to beat the Democrats then so he’s joining them now.

He’s now officially a member of the resistance & should be expelled from the @GOP.

The impeachment drama that has consumed Washington since September will come to an end with today's vote, allowing Trump to pivot toward winning re-election in November.

While the vote is historic, the outcome of acquittal appears assured. A two-thirds majority vote would be necessary to remove him. Republicans hold 53 of the Senate's 100 seats, and none of them has called for conviction. Trump, America's 45th president, would have to turn over his office to Vice President Mike Pence if convicted on either charge.

After facing the darkest chapter of his presidency, Trump, 73, is seeking a second four-year term in the 3 November election.

As they did on Tuesday, senators ahead of the vote made a series of speeches explaining their decision in the trial. It remains to be seen whether any Democratic senators break ranks from their party to hand Trump a bipartisan acquittal. 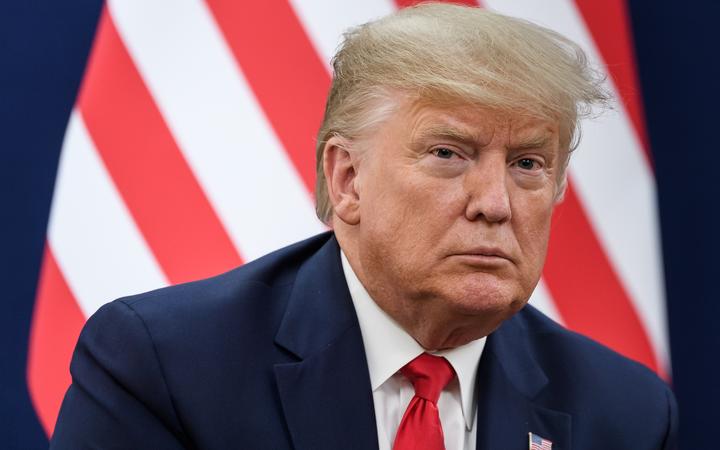 Donald Trump is expected to be acquitted in his Senate trial, leaving him a clear run to seek a second term as US president in November's election. Photo: AFP

Democratic Senator Doug Jones, facing a tough re-election bid this year in Republican-dominated Alabama, said he would vote to convict Trump on both charges and voiced alarm at the arguments by the president's lawyers in favour of virtually unchecked presidential power.

Jones also issued an appeal for unity at a time of deep partisan divisions in Washington and nationwide.

The impeachment charges against Trump centered on his request that Ukraine investigate political rival Biden and his son Hunter Biden and the president's subsequent actions to block testimony and documents sought by the House in its impeachment investigation.

Democrats accused Trump of abusing his power by withholding $US391 million ($NZ604m) in security aid passed by Congress to help Ukraine combat Russia-backed separatists as leverage to pressure Kiev to help him smear Biden, who is seeking his party's nomination to challenge Trump in November.

Trump denied wrongdoing and most Republicans in the House and Senate rallied around him. Over the past few days, some Republican senators have criticised Trump's behaviour but said it did not warrant his removal.

"I hope our Democratic colleagues will finally accept the results of this trial, just as they have not accepted the results of the 2016 election," said Republican Senator John Cornyn, saying he hopes they do not launch a second impeachment inquiry. "It's time for our country to come together, to heal the wounds that divide us." The impeachment trial has centred on allegations that Donald Trump wanted to pressure Ukraine to dig up dirt on his Democratic rival Joe Biden. Photo: AFP

Democratic Senator Kamala Harris said the trial underscored that "in America there are two systems of justice: one for the powerful and another for everyone else".

"Donald Trump knows all this better than anybody," Harris said.

"After the Senate votes today, Donald Trump will want the American people to feel cynical. He will want us not to care. He will want us to think he is all powerful and we have no power. We're not going to let him get away with that," Harris added.

The House launched its impeachment inquiry in September. The Senate trial began on 16 January. Senate Republicans voted down a Democratic bid to call witnesses such as former national security adviser John Bolton and present new evidence in the trial.

Trump is the third US president to have been impeached. The two others, Bill Clinton in 1999 and Andrew Johnson in 1868, were left in power by the Senate.