US President Donald Trump has hailed the "great American comeback" in a speech to Congress on the eve of his expected acquittal in his impeachment trial. 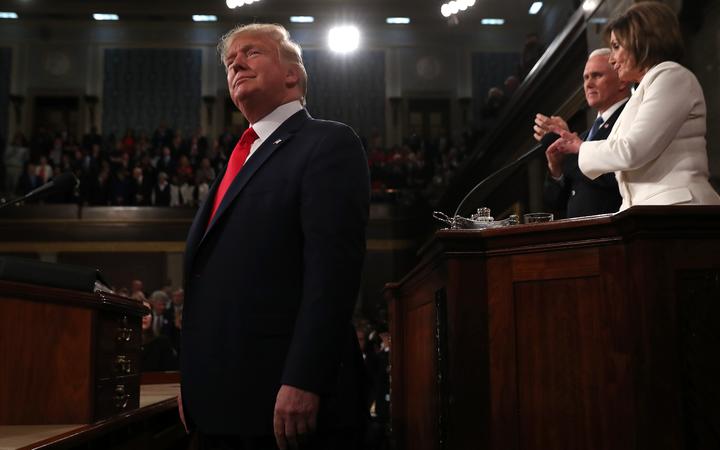 US President Donald Trump arrives, with Vice President Mike Pence and Speaker of the House Nancy Pelosi behind him, ahead of his third State of the Union address. Photo: LEAH MILLIS / POOL / AFP

At his annual State of the Union address, Mr Trump struck a tone of optimism as he set out his case for another four years in office.

"The years of economic decay are over," he said.

Trump refrained from lashing out directly at the lawmakers who have attempted to remove him from office.

The Republican president delivered nationally televised speech in the Democratic-controlled US House of Representatives today, where he was impeached in December.

On the other side of the Capitol, the Republican-led Senate is all but certain tomorrow to clear the president of corruption charges in a party-line vote.

Before Trump began speaking at the podium in the well of the House, he declined to shake the outstretched hand of the chamber's Speaker Nancy Pelosi.

It was the first time Trump had come face to face with his political foe since she stormed out of a White House meeting four months ago.

When the president accused Democrats of planning to force American taxpayers to provide unlimited free healthcare to undocumented immigrants, Pelosi was observed twice mouthing: "Not true."

At the end of the speech, America's most powerful elected Democrat ripped up a copy of the president's remarks from the dias. 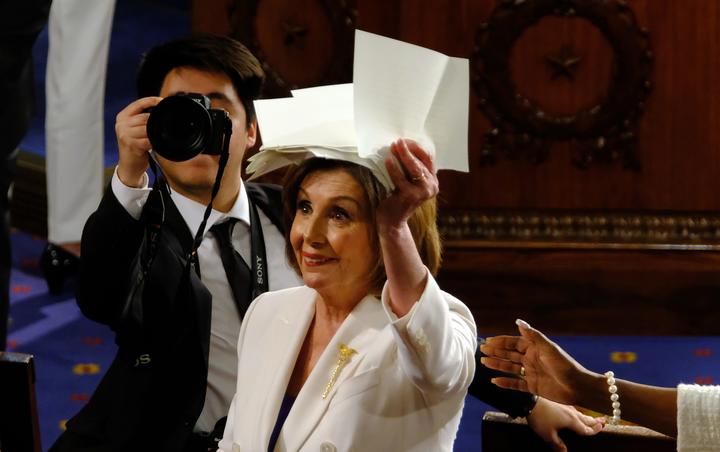 Pelosi did rise to applaud the president more than once, including when he promoted his pet project of infrastructure investment, a possible area of bipartisan co-operation.

Trump struck an upbeat note that contrasted sharply with his lament of "American carnage" in his 2017 inaugural presidential address.

In an implicit rebuke to his predecessor Barack Obama, the president told his audience: "In just three short years, we have shattered the mentality of American decline and we have rejected the downsizing of America's destiny.

"We are moving forward at a pace that was unimaginable just a short time ago, and we are never going back!"

Trump repeatedly jabbed at liberal Democrats, including left-wing candidates such as Bernie Sanders, who are vying to challenge him for the White House.

"We will never let socialism destroy American healthcare!" said the president, whose critics point out that he has not put forward a healthcare plan of his own.

The president invited several special guests to the address, including Venezuelan opposition leader Juan Guaido, two military veterans and the brother of a man killed by an undocumented immigrant.

In a move certain to infuriate liberal critics, Trump announced he would award the Presidential Medal of Freedom, America's highest civilian honour, to firebrand conservative radio host Rush Limbaugh, who revealed this week he has lung cancer.

First Lady Melania Trump bestowed the honour on an emotional Limbaugh as the president spoke.

A protester was escorted from the chamber while Trump defended gun rights. It was reportedly Fred Guttenberg, the father of Jaime Guttenberg, a student killed in a mass school shooting at Parkland, Florida, in February 2018.

Guttenberg was a guest of Pelosi.

As they did last year, many female Democrats - including Pelosi - wore white as tribute to the suffragettes who won the vote for US women in 1920.

Ocasio-Cortez tweeted that she would "not use my presence at a state ceremony to normalize Trump's lawless conduct & subversion of the Constitution".

She accused the president of failing to fix America's problems. "Bullying people on Twitter doesn't fix bridges - it burns them," she said.

Congresswoman Veronica Escobar of Texas will follow in Spanish.

As is traditional during the State of the Union, one member of the president's cabinet does not attend the address.

He or she remains at a secret location to make sure the government can continue should disaster befall the nation's president, vice-president and other top leaders.

That person, who is known as the designated survivor, was Interior Secretary David Bernhardt.