A man has been shot dead by officers in a "terrorist-related" incident in south London, the Met Police have said. 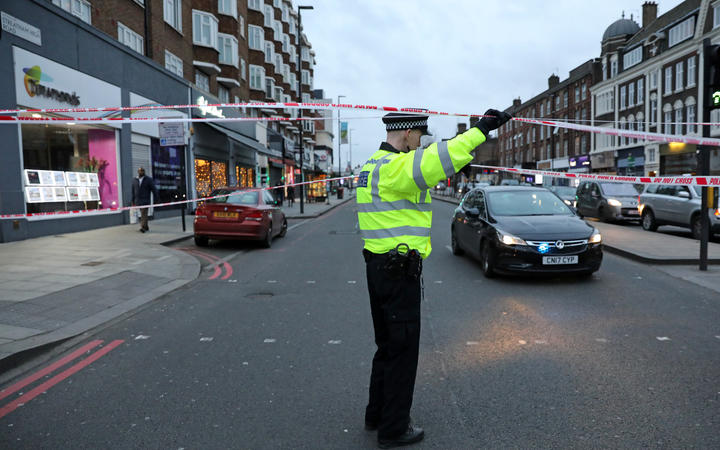 A police officer at a cordon on Streatham High Road, south London, after a man is shot dead by police following reports of a stabbing. Photo: AFP

It is believed two people have been injured in stabbings on Streatham High Road.

Gunshots were heard just after 2pm Sunday. Police later said the scene had been "fully contained".

Prime Minister Boris Johnson tweeted that his thoughts were with the injured and others affected. He thanked emergency services for their response.

London Ambulance Service said it was treating a number of people at the scene.

The Metropolitan Police said it was awaiting updates on the condition of those injured.

A large police cordon stretches from Streatham Hill station and there was a heavy police presence; helicopters are overhead.

Gulled Bulhan, a 19-year-old student from Streatham, saw the shooting take place in front of a Boots pharmacy.

"I was crossing the road when I saw a man with a machete and silver canisters on his chest being chased by what I assume was an undercover police officer," he told the PA news agency.

"The man was then shot. I heard three gunshots."

Eyewitness Daniel Gough said he was out for a run when he heard the shots and everyone ran.

"There was panic, people were yelling," he said. "A young girl running alongside me kept asking 'Is this what I'm meant to do?' - she was very distressed.

"I saw a policeman and he yelled, telling everyone to get back. His gun was pointing in the direction of a man on the floor.

Videos shared on social media showed several armed officers get out of a car and approach a man lying on the pavement outside a branch of Boots.

Adam Blake, also on the high road, described how he saw two or three cars crash into each other, including an unmarked police car, as the incident unfolded.

"Another police car carried on towards the hill pursuing someone," he told the BBC.

Mayor of London Sadiq Khan thanked emergency services for their "swift and courageous response", saying: "They truly are the best of us."

"Terrorists seek to divide us and to destroy our way of life - here in London we will never let them succeed."

Streatham's Labour MP Bell Ribeiro-Addy said her thoughts were with those injured, their families and those who witnessed the attack.

BBC journalist Steffan Powell, in Streatham, said armed police were everywhere and had been telling residents to stay inside.