An Iranian passenger plane ended up belly-down in the middle of a highway after reportedly skidding off the runway during a botched landing. 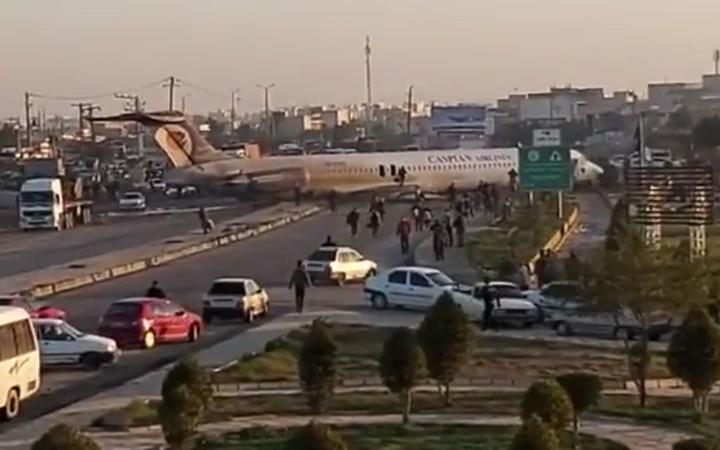 None of the 135 passengers on board were hurt in the incident in the south-western city of Mahshahr.

The Caspian Airlines flight had departed from Tehran. Its wheels did not appear to be fully down for the landing.

Images and footage of passengers exiting the aircraft were posted on social media.

State TV quoted provincial aviation officials as saying the pilot "landed the aircraft too late and this caused him to miss the runway".

A reporter who was on board the aircraft said that the back wheel of the McDonnell Douglas plane had broken off and that the plane skidded without its wheels.

Civil aviation spokesman Reza Jafarzadeh told the semi-official Isna news agency that the plane skidded off the runway at 7.50am local time on Monday. He added that an investigation was underway.

Dramatic footage of a passenger plane belonging to #Iran’s Caspian airline landing in the middle of the street in Mahshahr (same city that many were killed in Nov. protest) this happened in the last hour. Witness who got the footage didn’t know if there were any casualties. pic.twitter.com/oa6ghmT8bu

This one shows people getting off. Scary how so many are just hanging around the plane. #Iran pic.twitter.com/x0psWZY7Ql

Iran has a poor aviation safety record. Sixty-six people were killed in a plane crash in February 2019, while dozens were killed when an IranAir plane broke into pieces upon landing in 2011.

The EU has either banned or restricted two Iranian airlines from using its airspace over safety concerns.

Iran had planned to upgrade its ageing fleet after years of sanctions were lifted as part of the 2015 nuclear deal signed with world powers. However, the US Treasury revoked licences for companies to sell passenger aircraft to Iran after President Donald Trump left the agreement in 2018.