Canadian volunteers are sending six aeroplanes full of handmade goods and medical supplies to help the animals injured in Australia's wildfires. But officials are worried that a deluge of good intentions could spark a "second disaster". 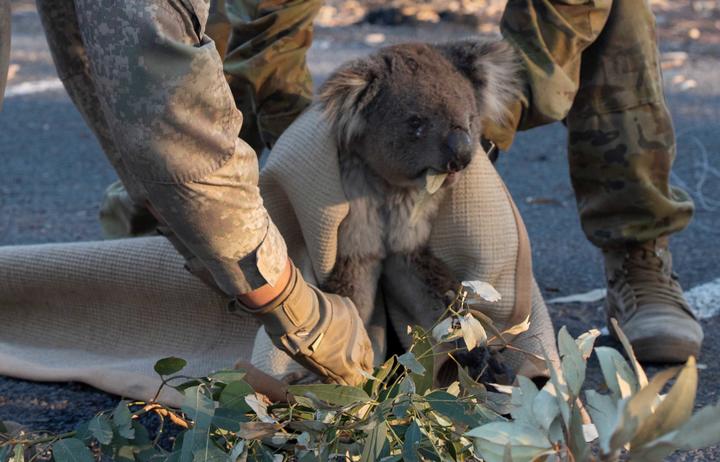 When Canadian Brianna MacDonald found herself confronted by the devastation of the bushfires over Christmas, she decided she had to do something to help the wildlife in her adopted home of Australia, where she has lived for seven years.

Along with her mother and two sisters back in Canada, MacDonald has become part of a cross-national effort by crafters to send soft goods like baskets, jackets and pouches for animals injured or orphaned in the wildfires.

"There were so many people offering to help," Brianna's sister Carol MacDonald told the BBC.

The whole family joined the Canadian Animal Rescue Craft Guild, a Facebook group that has united 11,000 people from across Canada to knit, sew or crochet for the cause.

In eastern Ontario where she is based, Carol says they collected about 5000 soft goods and another 2000 medical supplies, weighing almost 500 kilograms.

Meanwhile in Sydney, Brianna opened her home to donations of crafts, medical supplies and food for the Animal Rescue Cooperative, which helps support wildlife rescuers across the country.

She also agreed to let the Canadian crafters ship supplies to her home, since, through her work with Animal Rescue Cooperative, she knew how to distribute the supplies and where they were needed.

Soon, her house was full, and so she had to rent a warehouse in order to store all the goods.

"The outpouring of not only the Australian community but the Canadian community has been absolutely jaw dropping," Brianna said.

The boxes from Canada arrived via the airline Air Canada, which is shipping them free of charge on board six of its commercial flights destined for Australia.

The first flight left Halifax on 17 January, and the last left Vancouver on 27 January.

Canada wasn't the only country to send handmade help.

As images of the devastation flooded the media, knitters in the UK, Asia and the US have also rallied to help.

The good intentions have sparked concern from officials in Australia, however.

One Australian group has asked international supplies to stop being sent altogether.

"We are continuing reaching out to as many rescues as we can (any and all of them) and helping them as we can, but the answer generally is, 'Thanks guys, we're good!'," wrote the Animal Rescue Collective Craft Guild, which also works with the Animal Rescue Cooperative.

"Thank you for your support, solidarity, kind words & thoughts, and crafted items so far. We ask you, please do not send any more items to Australia."

Donations an issue during disasters

Too much stuff is an all too common problem during a disaster, says Juanita Rilling, director of the Center for International Disaster Information in the US.

"Certainly in the last 50 years worldwide, the response to almost every major emergency has been affected by a flood of unsolicited donations that get in the way," she told the BBC.

Donations of goods from abroad often compete with local rescue efforts for resources like airport runway space, staff and gasoline, if there are shortages.

Warehouses holding goods that may or may not be needed might be better serves by housing other supplies.

And heavy cargo planes flying overseas emit greenhouse gasses and pollution that could be avoided by more local shipments.

Rilling says that if you want to help when a disaster strikes, the best thing to do is send money to a reputable organisation working on the ground - even if all you can afford is a few dollars.

"People are suspicious about sending cash," she says. "The trick is to identify who is actually working in the area and donate to them."

Ultimately, people just want to help and everyone understands that these donations are given with love.

"It's a beautiful thing," Rilling says.

As for the Canadian crafters, they are turning their attention - and knitting needles - to helping wildlife groups closer to home.