Rain falling across NSW is offering some relief for fire crews battling blazes, but there are concerns the wet weather could cause landslides, flash flooding and contaminate water. 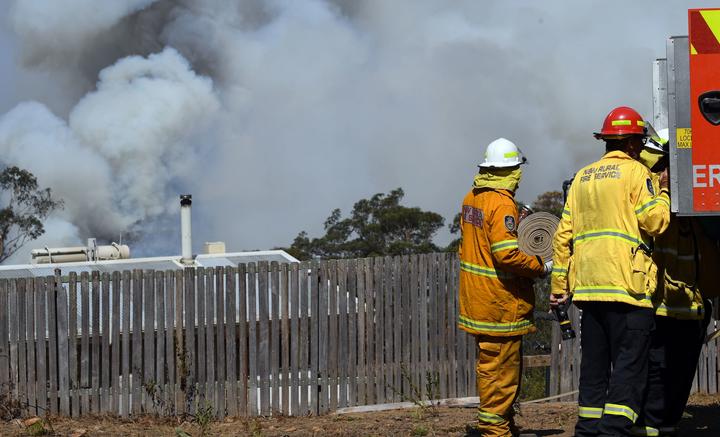 Cool, wet conditions are good news for firefighters who have been battling hundreds of blazes across the state since September.

The Bureau of Meteorology (BOM) predicted between 30 and 80 millimetres of rain would fall in some areas between today and Sunday.

The heavens opened over Sydney this morning and about 20-40mm is set to fall over the next few days.

Meanwhile, the NSW Rural Fire Service (RFS) said there were already "good falls" across some firegrounds.

The downpour is a result of a deep inland trough moving through the state which is drawing humid air into the system.

RFS Inspector Ben Shepherd said he was expecting around 10-15mm to drop on most firegrounds, with the highest falls predicted in the Hunter.

"This won't be enough to extinguish the fires, but will take the sting out of them," he said.

"It's the most positive forecast the RFS has had in months and will give crews a chance to regroup and work on containment lines."

However, BOM forecaster Abrar Shabren said debris, which has remained on firegrounds for weeks, could prevent water from being absorbed into the soil.

It could also lead to a significant run-off of ash, soil and other debris which have accumulated in the past months.

"Flash flooding is generally a concern with thunderstorms and ponding of water on roads," Mr Shabren said.

Mr Shabren said bushfire areas, particularly in elevated regions, were also "vulnerable" to landslides and toppling trees during thunderstorms because fires would have weakened the vegetation.

The amount of rainfall is also unlikely to replenish dams or break the drought in any regions, according to Tony Weber from WaterNSW.

Warragamba Dam, which supplies water to more than 5 million people living in Sydney and the lower Blue Mountains, is at 43.7 per cent capacity.

"The modelling tells us that given the size of the catchment and the prolonged dry period that's been experienced, we'll need rain well in excess of that to really generate any inflows," Mr Weber said.

He said the rain would bring some relief to drought-stricken regional towns.

"It's likely to hit some areas of regional NSW, if not all of them that have been experiencing the drought circumstances for so long," he said.

Yesterday, the ABC reported the State Government was racing to raise curtains and install booms to prevent silt and ash from contaminating the water at Warragamba Dam.

Over 320,000 hectares around the catchment has been burnt this fire season.

"So the volume of ash and debris that's flowing around the catchment is extensive," Mr Weber said.

"The advice we've had from the Bureau of Meteorology is that this rain probably won't be sufficient to generate that sort of run-off.

"But the risk of ash contamination for the storage will remain a reality for some six to 12 months to come."