At least six people have been killed and 16 injured after an enormous sinkhole swallowed a bus and a number of pedestrians in central China. 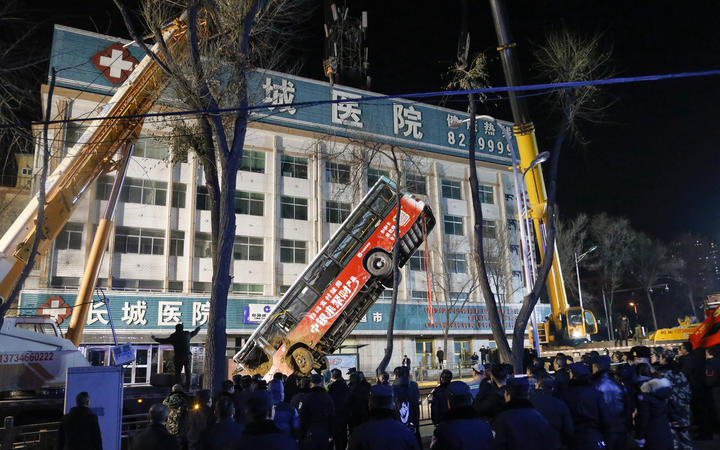 Chinese rescuers watching as a bus is lifted out after a road collapse in Xining in China's northwestern Qinghai province on 13 January, 2020. Photo: STR / AFP

The incident occurred on Monday evening outside a hospital in Xining, the capital of Qinghai province.

CCTV footage showed an explosion inside the sinkhole shortly after the bus and bystanders fell inside on Monday evening.

Several deadly sinkholes have been reported in China in recent years.

The footage from the latest incident shows the moment people waiting at a bus stop are forced to flee as the ground underneath the bus starts to cave in.

A number of people gather to try to rescue the bus passengers, but are engulfed by the sinkhole as it suddenly widens.

According to state media, the sinkhole stretched nearly 10m in diameter.

It is unclear how many people were inside the bus at the time of the incident.

Sinkholes in China are often blamed on construction works and the rapid pace of development in the country.

In 2018, four people were killed after a sinkhole opened up on a busy pavement in the city of Dazhou, south-west China.

In 2013, a similar incident killed five people at an industrial estate in the southern city of Shenzhen.