Puerto Rico Governor Wanda Vazquez has declared a state of emergency after a series of earthquakes killed at least one person, toppled buildings and knocked out power to nearly the entire island of more than three million people. 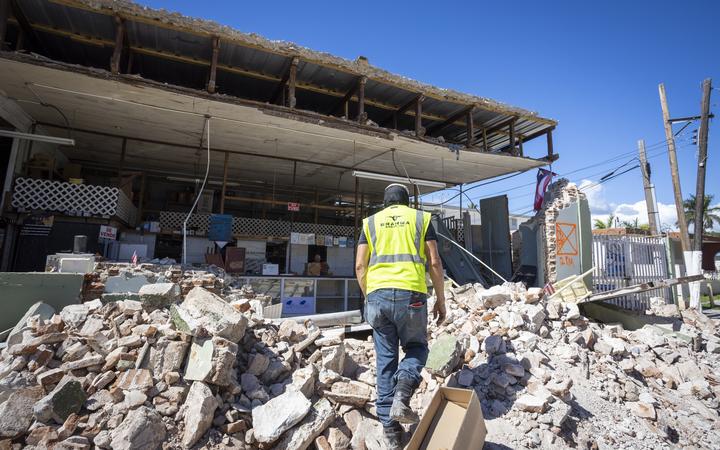 A man assesses the damage of the Puerto Rico earthquake. Photo: AFP

The largest of the quakes in the US territory registered at magnitude 6.4, the most powerful to hit the Caribbean island in 102 years.

With two large power plants shut down, drinking water was cut off to at least 300,000 customers, Vazquez told a news conference.

She said power should be restored to most of the island within 24 to 48 hours. Puerto Rico schools will remain closed and public employees, other than health workers and police, will stay home on Wednesday while checks are made on the structural safety of buildings, Vazquez said.

Puerto Rico's electricity authority said it hoped to re-establish services during the night in the metropolitan area of San Juan, the capital, which is home to about 2.3 million people.

At least 346 people were left homeless, officials said, after homes were flattened, mostly in the south of the island. Many damaged buildings sat next to piles of rubble.

"Water is running out, people are grabbing like 10 boxes," said Borri, who recharged his cellphone at San Juan's international airport where he works and where backup generators allowed normal services to continue.

Puerto Rico's emergency declaration will facilitate federal financial aid. President Donald Trump has been briefed on the earthquakes, and administration officials were monitoring the impact in coordination with Puerto Rico officials.

Puerto Rico has been rocked by hundreds of quakes since 28 December, including 10 of magnitude 4 or greater, the US Geological Survey said.

Powerful quakes are rare in Puerto Rico. A 7.3 magnitude quake that occurred in 1918 triggered a tsunami and killed 116 people, according to the island's seismology office.

"Everyone's scared, it's the first time anything like this has happened," said San Juan resident Patricia Alonso, 48, who with her 13-year-old son was heading to her mother's apartment building, which had power from an emergency generator.

Hurricanes Irma and Maria in 2017 killed about 3000 people and destroyed a significant amount of infrastructure. Puerto Rico is also working through a bankruptcy process to restructure about $120 billion of debt and pension obligations.

"We are a resilient people. We have responded to many difficult situations. Now this has been asked of us one more time," said Vazquez, who assumed office in August after Ricardo Rossello stepped down over a scandal involving offensive chat messages and government corruption.

One of Tuesday's quakes triggered an automatic shutdown of electricity across the island as a safety measure and a later, more powerful quake damaged power plants in the southern part of the island, Vazquez said.

A 73-year-old man died after a wall fell on him, and a power plant worker was hospitalized after he was hit by debris, the governor said.

Tuesday's magnitude 6.4 quake struck at a depth of 10 km at 4.24 am local time near Ponce on the island's southern coast, the US Geological Survey said.

Witnesses on social media described it as "super strong" and lasting up to 30 seconds. It was followed by a number of hefty aftershocks, including two measuring 5.6.