NB: This story contains some disturbing images of dead animals.

Australia's Defence Force will dig mass graves for the country's burned livestock in a bid to fight off a biosecurity emergency, as the bushfires crisis continues to grip the country. 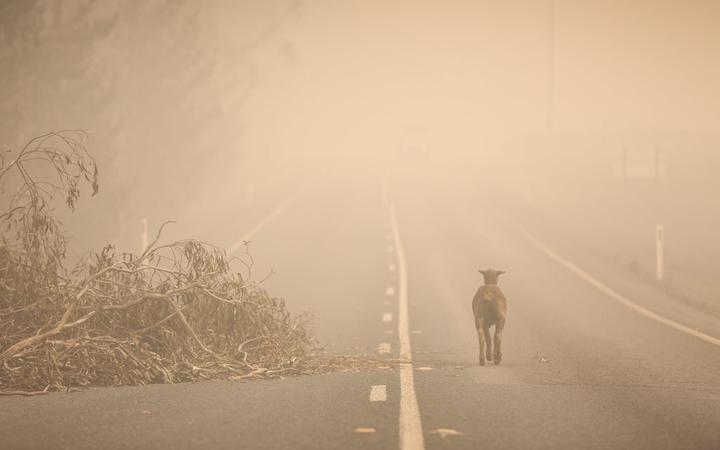 It's expected the bushfires will devastate Australia's national herd with hundreds of thousands of animals already killed by the blazes. Photo: Twitter / ABC screenshot

Hundreds of thousands of animals have perished in the blazes, according to estimates from the National Farmers Federation, and more have abandoned paddocks that have had fences burned.

"I've got 100 vets across the country I've offered to state [agriculture] ministers," she told RN Breakfast.

"I know South Australia, Victoria and New South Wales will be taking up that offer to get that assistance as soon as possible - to not just assess the health, but these teams will also be euthanasing stock."

Senator McKenzie said the dead animals presented a massive biosecurity risk and the Defence Force would help the clean-up, "to dig the pits, if you like, that are going to be required to bury this level of stock".

"It's about getting access to those still-live firegrounds but where it's safe to do so we need to be getting in within a week to really be dealing with the carcasses in an appropriate way".

James Zimmerman, a firefighter who helped defend Batlow on Sunday, posted on Facebook as he was defending the fires that they needed ammunition "to put livestock out of their misery".

ABC journalist Tom Lowrey was in Batlow this morning to witness the devastation, saying dead livestock littered the road on the way into town.

"Farmers were this morning loading the charred bodies into utes - they said they did what they could, and saved many, but couldn't save all."

In fire-scorched Batlow, New South Wales, animal carcasses line the sides of the road, with farmers beginning the slow, difficult and grim work of loading the bodies onto the trays of utes.

Most are sheep and cattle held on surrounding properties. Most are clumped together, their bodies blackened.

Farmers said they were as prepared for the fire as they could be, and while some animals had survived, they could not save them all.

With stock losses likely to reach into tens of thousands, and public health and biosecurity risks to consider, logistical arrangements for the removal of carcasses are being factored into recovery efforts.

"In many rural areas, [there are] fences to be rebuilt and carcasses of animals to be removed who have been caught in these fires," Morrison said.

Michael Guerin, chief executive officer of peak agricultural body Agforce, called for the government to implement a similar response to the effort following the 2019 Townsville floods, during which 664,000 head of stock were lost.

"We would like to acknowledge the federal government and the prime minister's words about recognising this has to be a coordinated response, with support for farmers who can't do it on their own," he said.

"If we don't deal with it quickly, we are facing health and safety issues, disease issues, biosecurity issues, which … puts an amazing industry at risk if we don't do it properly."