The US has conducted air strikes against Iranian-backed paramilitaries in Iraq and Syria following the death of a US contractor. 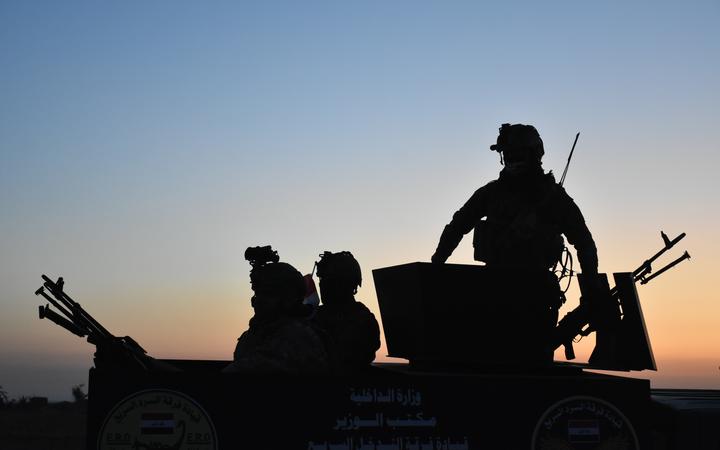 The strikes were in retaliation for a rocket attack on an Iraqi base in Kirkuk where Iraqi soldiers are pictured here. Photo: AFP

Iraqi security sources said at least 25 fighters of the Kataib Hezbollah group were killed and more than 50 wounded in Sunday's strikes.

The group is considered a terrorist organisation by the US.

A rocket attack on a base in Kirkuk on Friday killed a US contractor and wounded other personnel.

Speaking in Washington DC on Saturday, US Secretary of State Mike Pompeo warned Iran that the US would retaliate if American lives were threatened.

"Today what we did was take a decisive response that makes clear what President Trump has said for months - which is that we will not stand for the Islamic Republic of Iran taking actions that put American men and women in jeopardy," he said.

The targets were either weapons' storage facilities or command and control centres, Esper added.

Iraqi sources said one of the strikes had hit the militia group's headquarters in the western Al-Qaim district and at least four commanders were among the dead.

Who are Kataib Hezbollah?

Kataib Hezbollah - a Shia Muslim militia group that is backed by Iran - was founded in 2007.

The US says Kataib Hezbollah has a strong link with Iran's Quds Force and has repeatedly received aid and support from Iran that it has used to attack coalition forces.

The Trump administration has alleged that the Quds Force is "Iran's primary mechanism for cultivating and supporting" US-designated terrorist groups across the Middle East - including Lebanon's Hezbollah movement and Palestinian Islamic Jihad - by providing funding, training, weapons and equipment.

What is Iran suspected of doing in Iraq?

Iran's influence over Iraq's internal affairs has grown steadily since the US-led invasion that toppled Saddam Hussein in 2003.

It has close links to Shia politicians who are part of the ruling elite, and has backed the paramilitary Popular Mobilisation force, which is dominated by Shia militias.

rotesters in Iraq have accused Iran of complicity in Iraq's failure and corruption. They have set fire to a number of Iranian consulate buildings in the country during the recent wave of protests.

Earlier this month, US Secretary of State Mike Pompeo blamed Iranian-backed forces for a series of attacks in Iraq.

He warned Iran that any attacks by the country or its proxies that harmed the US or allies would be "answered with a decisive US response".