The stabbing at a rabbi's house in New York state was "domestic terrorism", state governor Andrew Cuomo says, and there should be a law in the state to prosecute it. 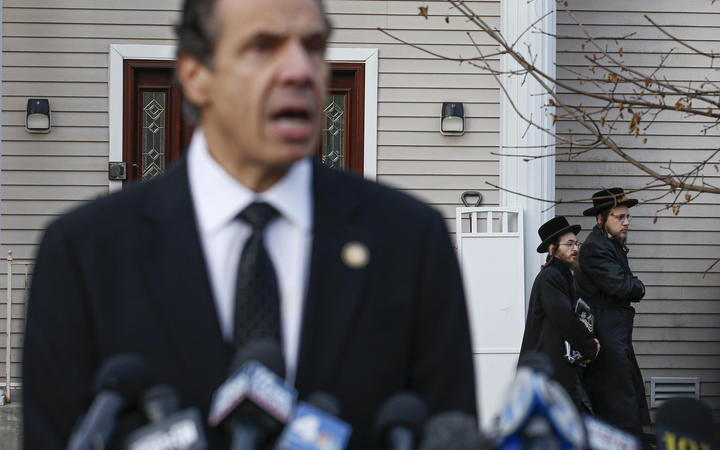 A man brandishing a machete attacked a Hanukkah celebration about 11pm local time at the rabbi's property in Monsey - an area with a large population of ultra-Orthodox Jews north of the city of New York.

At least five people were stabbed in the attack.

Witnesses said the attacker burst into the house, pulled out a large knife and began attacking people.

Guests reportedly threw tables and chairs at the man, who then attempted to enter a synagogue next door before fleeing in a car.

His vehicle registration was passed to police and license plate scanners picked up the car as it entered New York City, where he was detained in the Harlem area.

"The house had many dozens of people in there," Yossi Gestetner, a co-founder of OJPAC for the Hudson Valley region, told the New York Times.

He said the assailant had his face partially covered by a scarf during the attack and the rabbi's son was one of those he wounded.

Aron Kohn, 65, was in the rabbi's home at the time and told the paper: "I was praying for my life. He started attacking people right away as soon as he came in the door. We didn't have time to react at all."

Local police said the attacker - who has not yet been identified - would face five charges of attempted murder and one of burglary.

Two of the victims were still in hospital, police said.

'We are not going to let this poison spread'

Governor Cuomo described the attack as "very disturbing" but said it was not an isolated incident, and that hostility based on race, religion and immigration status was spreading across the country.

Hatred based on race, colour and creed was an "American cancer spreading in the body politic", the governor told a news conference.

He called for a domestic terrorism law in the state to prosecute such crimes.

"It is domestic terrorism. These are people who intend to create mass harm, mass violence, and generate fear based on race, colour, creed. That is the definition of terrorism," he said.

"Just because they don't come from another country doesn't mean they are not terrorists. They should be prosecuted as domestic terrorists." 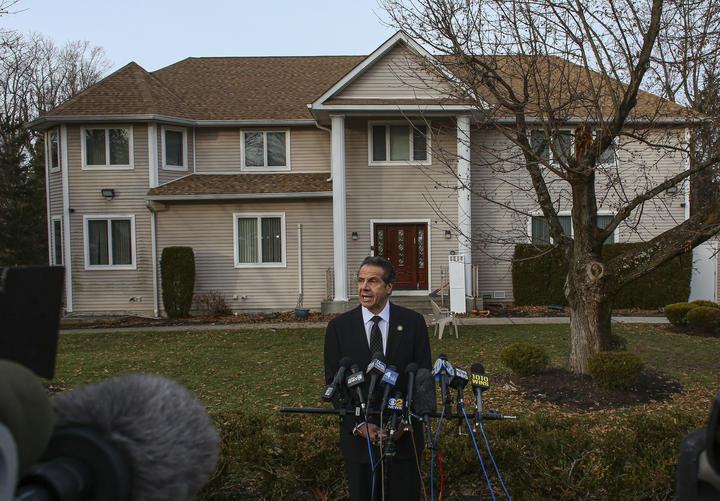 The attack came a day after New York police said officers were stepping up patrols in heavily Jewish districts following a spate of anti-Semitic threats and attacks.

In a tweet, US President Donald Trump said the attack was "horrific".

"The anti-Semitic attack in Monsey, New York, on the 7th night of Hanukkah last night is horrific. We must all come together to fight, confront, and eradicate the evil scourge of anti-Semitism. Melania and I wish the victims a quick and full recovery," he wrote.

His daughter Ivanka - who converted to Judaism - tweeted that it was an "act of pure evil".

In Israel, President Reuven Rivlin expressed his "shock and outrage" at the attack.

"The rise of anti-Semitism is not just a Jewish problem, and certainly not just the State of Israel's problem," he said in a statement.

"We must work together to confront this evil, which is raising its head again and is a genuine threat around the world."

Steve Gold from the Jewish Federation in Rockland County said the US had failed the Jewish community.

The attack follows a series of anti-Semitic threats and attacks in and around New York City. On Friday Mayor Bill de Blasio announced extra police patrols in three areas of Brooklyn.

Responding to the attack in Monsey, de Blasio said he could not "overstate the fear people are feeling right now".

"We will not allow this to become the new normal. We'll use every tool we have to stop these attacks once and for all," he said.

The Jewish holiday of Hanukkah marks the victory of Judah Maccabee over the Syrian Greeks in the Second Century BC and the recapture of Jerusalem.

The New Zealand Jewish Council says it is extremely troubled at a spate of anti-semitic violence in the United States.

The organisation said in the last week there had been 10 anti-semitic assaults in the New York State alone, including a stabbing at synagogue and a shooting that left four dead.

It said these attacks must be condemned with the same tenacity as other types of violent extremism.

Are anti-Semitic attacks on the rise in the US?

They included a threat by a man who walked into an Orthodox Jewish community organisation's headquarters in Brooklyn and threatened to shoot someone. In another incident a 30-year-old woman reportedly slapped three women in the face.

"You see a swastika being drawn, you see a brick being thrown through a window, you see a woman walking down the street with her kids and having her wig ripped off," he said.

Earlier this month officials in New Jersey said a gun attack that killed a detective and three people in a Jewish supermarket was being investigated as "potential acts of domestic terror, fuelled both by anti-Semitism and anti-law enforcement beliefs".

In April a gunman killed a female rabbi and wounded three people at a synagogue in San Diego.

That attack came exactly six months after the deadliest anti-Semitic attack in US history, when a gunman killed 11 worshippers at the Tree of Life synagogue in Pittsburgh.