A British ex-soldier who helped found Syria's White Helmets volunteer group died as a result of a fall, Turkish forensic experts have concluded. 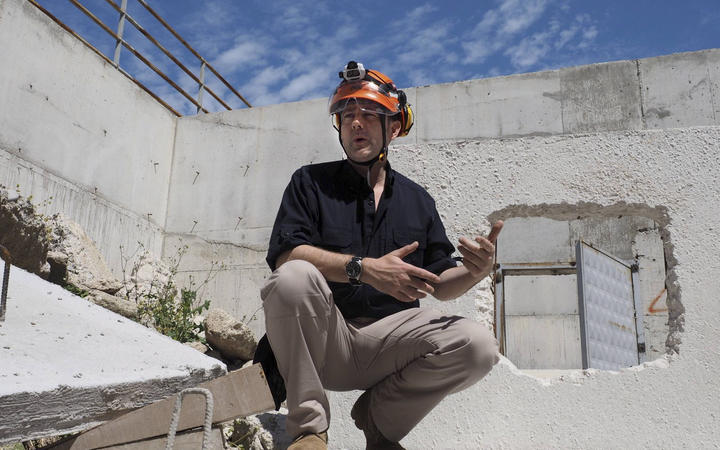 James Le Mesurier was found dead on a street below a window of his flat in Istanbul's Beyoglu area on 11 November.

A post-mortem examination found the cause of death was "general body trauma linked to a fall from height", state broadcaster TRT said on Monday.

No DNA belonging to another person was found, it added.

Last week, the state-run Anadolu news agency said Le Mesurier's Swedish wife, Emma Winberg, had told police that he contemplated suicide in the days before his death and had started taking medication for a "stress disorder".

She said that on the night of his death Le Mesurier had taken a sleeping pill at 02:00, Anadolu cited a police statement as saying.

He awoke when she went to bed about two-and-a-half hours later and asked her if she wanted a sleeping pill as well, it added.

Ms Winberg reportedly said she woke up between 05:30 and 06:00, when the police knocked on the door of their flat. She then saw her husband's body.

Mr Le Mesurier was widely considered a founder of the White Helmets.

The controversial organisation, which is also known as the Syria Civil Defence, helped rescue civilians caught up in attacks in areas of Syria controlled by opposition to President Bashar al-Assad.

In 2016, the White Helmets received the Right Livelihood Award in recognition for "outstanding bravery, compassion and humanitarian engagement in rescuing civilians". Later the same year the group was nominated for the Nobel Peace Prize.

But the Syrian government, Russia and Iran have accused the White Helmets of aiding Islamic terrorist groups - something the organisation denied.

A week before he died, the Russian foreign ministry accused Le Mesurier of being a former agent of the UK's Secret Intelligence Service, better known as MI6. The UK's ambassador to the UN said the claim was "categorically untrue".

Le Mesurier received an OBE from the Queen in 2016 for "services to the Syria Civil Defence group and the protection of civilians in Syria".